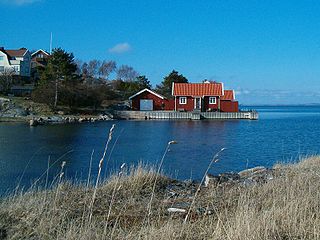 Öckerö Municipality (Öckerö kommun) is a municipality in Västra Götaland County in western Sweden. Its seat is located in the town of Öckerö on the main island, which is also called Öckerö.

The municipality consists of islands in the Northern Gothenburg Archipelago, just outside of Gothenburg. With a total area of 26.03 km² it is one of the smallest municipalities of Sweden.

The municipality is one of very few in Sweden which has not been amalgamated and thus still has the same area as the unit formed out of a parish (socken) by the first local government acts of 1862. In the period 1915–1959 there were a number of municipalsamhällen (a sort of boroughs within a rural municipality handling matters of urban character) in the municipality.

The municipality consists of ten year-round inhabited islands. They are considered to stretch from a renowned lighthouse called Vinga fyr up to the coastal town of Marstrand in the municipality of Kungälv. The ten islands are named:

Of these, Hönö is the largest with some 4,800 inhabitants, and Öckerö is also fairly large with 3,100. However, all ten are inhabited by people all year around. Most islands have bridge connection between each other. However, there is no road connection to the mainland, just car ferries from western Gothenburg. The ferry connections are good with a dense schedule. A local referendum in 2003 in Öckerö Municipality rejected the plans for a future bridge to the mainland.

During the Viking Age the islands of Öckerö belonged to the Norwegian kings, and the part of the coast was known as Älvsyssel. In the 13th century the King Håkan Håkansson of Norway built himself a house on Öckerö, because he was often around there with his navy.

In 1658 or thereabout, the area became Swedish together with Bohuslän.

In the middle of the 18th century, the fishing of herring blossomed into a full scaled industry, and the islands fishing communities flourished for some 50 years.

In the 1950s the coat of arms were designed. As the main industry has always been fishing, a boat and herring became symbols. The ten herrings correspond to the ten islands.