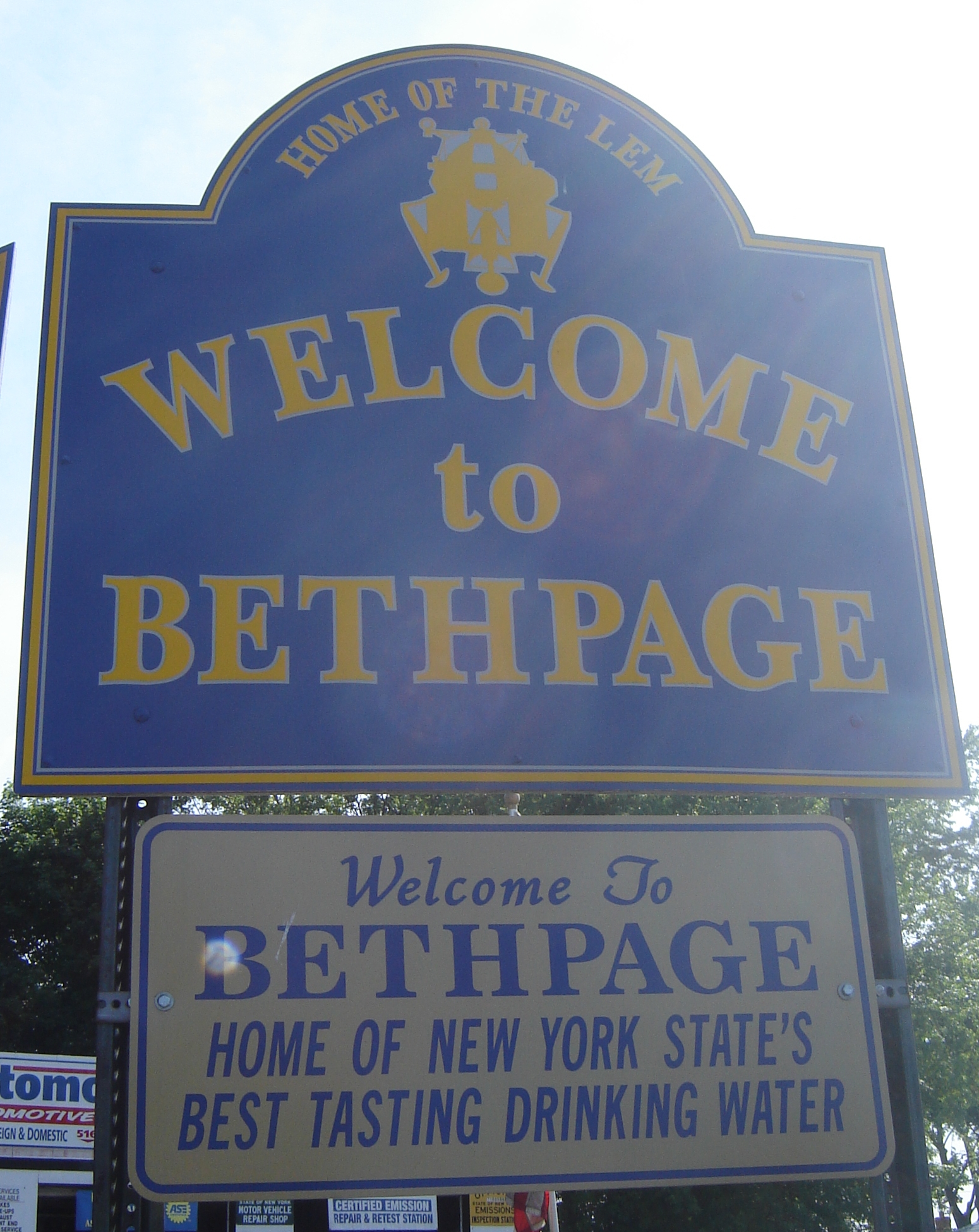 Bethpage is within the "Town of Oyster Bay" with its own school district. The boundaries of the school district include parts of some surrounding hamlets (such as Old Bethpage and Plainedge). The for most of the hamlet is 11714, though the most northeastern part of Bethpage is in the postal district of 11804.The Town of Hempstead, on its website, [cite web |url=http://www.townofhempstead.org/content/home/townmap.html |title=Town of Hempstead Map |Accessdate=2008-01-16] includes a small part of Bethpage that is in the Levittown census-designated place.

The name "Bethpage" comes from the in 1695.An early name for the northern section of present-day Bethpage was "Bedelltown".

On maps just before the arrival of the (LIRR), the name "Bethpage" appears for a community now included in both the post office district and school district of the adjacent community of Farmingdale. [ cite web
url= http://digitalgallery.nypl.org/nypldigital/dgdisplaylargemeta.cfm?strucID=252877&imageID=434024&word=long%20island%201842&s=1&notword=&d=&c=&f=&lWord=&lField=&sScope=&sLevel=&sLabel=&num=0&imgs=12&total=2&pos=1
title= Geological map of Long & Staten islands with the environs of New York
authors= W.W. Mather, geologist of the First District of New York, from the topographical surveys of J. Calvin Smith
publisher= New York Public Library
date= 1842? (The location marked "Bethpage" is near Merritts Road, just north of Hempstead Turnpike. An unbounded area further east in Suffolk County is marked "Hardscrabble". The map is dated 1842 with a question mark. Neither Farmingdale nor Hicksville appears on the map. The Hicksville LIRR station opened in 1837, and its absence suggests an earlier date for the map. The LIRR also had taken a different route east of Hicksville, arriving in Farmingdale in 1841.)] In 1841, [ cite web |url= http://www.lirrhistory.com/lirrhist.html |title=Early LIRR History] train service began to Farmingdale station, near a new settlement less than a mile eastward from what had previously appeared on maps as "Bethpage". Schedules at that time do not mention Bethpage as a stop, but have a notation "late Bethpage". [cite web |url=http://eagle.brooklynpubliclibrary.org/Default/Scripting/ArticleWin.asp?From=Search&Key=BEG/1841/11/02/3/Ar00316.xml&CollName=BEG_COL1_FULL2&DOCID=954&Keyword=%28%3Cmany%3E%3Cstem%3Ebethpage%29&skin=BE&AppName=2&ViewMode=GIF |title=1841 "Brooklyn Eagle" LIRR timetable |date=1841-11-02 |publisher= (Whether "late Bethpage" is meant to indicate a flag stop at the community near Merritts Road, or that the area near the Farmingdale LIRR station had lately been called "Bethpage" has not yet been determined.)] On an 1855 map, [cite web |url=http://arrts-arrchives.com/H&CSBRR.html |title=1855 Colton map] the location identified as "Bethpage" has shifted slightly westward to include a nearby area now called Plainedge.

Following the 1932 opening of nearby , the name of the local post office was changed to Bethpage on , . The name "Bethpage" was, however, already in use by an adjacent community,

From 1936 until 1994, Bethpage was home to the , which made, among other things, the and the for moon landings. (Bethpage is thus mentioned in the film "Apollo 13".) Cablevision Systems Corporation, a company, is headquartered in Grumman's former main office.

There were 5,710 households out of which 32% had children under the age of 18 living with them, 66.0% were married couples living together, 10.0% had a female householder with no husband present, and 20.9% were non-families. 17.9% of all households were made up of individuals and 11.3% had someone living alone who was 65 years of age or older. The average household size was 2.89 and the average family size was 3.27.

Bethpage has become famous among varsity football teams for being the home of an excellent football program, having won 10 Nassau County and 5 Championships since 1984 when the playoffs expanded to four teams. The tradition of Bethpage football started in 1952 when created the first team, and he has since become New York State’s all-time winningest high school varsity football coach. Vogts' remarkable career record stands at 342-114-10 mark in 53 seasons. One of Bethpage's most notable records was a 60-game home unbeaten streak (59-0-1) between 1989 and 2004. They happily lost to the Wantagh Warriors to end that streak. It ended on October 23, 2004 when the Golden Eagles lost 27-0 to the Wantagh Warriors, led by senior quarterback Pete Houck. Since that loss, Bethpage has won 11 straight at home. Until yet again losing to the Wantagh Warriors again 22-15 in 2007.Bethpage considers there 3 biggest rivals to be1. High School Red Devils2. High School Warriors 3. High School Owls

Other points of interest

Bethpage was the home of the plant that produced the s, or LEMs.

offers five golf courses to choose from. One of them, the black course, was the site of the U.S. Open in 2002 and will again be the site for the upcoming event in 2009. Tiger Woods won the event in 2002. While much of the park and its five golf courses are located within Bethpage and Old Bethpage, the offices are within the neighboring Farmingdale postal district.

Bethpage Water District was announced as the best tasting drinking water in New York State at the state fair in Syracuse in 2006. [http://www.bethpagewater.org/proclomation.jpg]

Congressional Medal of Honor recipient, , lived in Bethpage. [ [http://www.medalofhonor.com/StephenKaropczyc.htm Medal of Honor.com- Stephen E. Karopczyc] ] The former Karopczyc School in Levittown (part of the ) was renamed for him. The school now houses the .