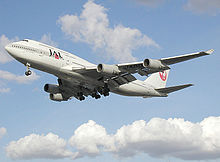 The mid-air incident occurred as flight attendants began to serve drinks onboard Flight 907.[4]

The two planes were on a collision course towards each other. The pilots of both planes had received conflicting instructions from their TCAS and the flight controller at the Tokyo Area Control Center in Tokorozawa, Saitama Prefecture. Flight 907, headed by 40-year-old pilot Makoto Watanabe (渡辺 誠, Watanabe Makoto?), followed an order to descend issued by the flight controller while Flight 958, headed by pilot Tatsuyuki Akazawa (赤沢 達幸, Akazawa Tatsuyuki?), descended as instructed by the TCAS, meaning that both planes remained on a collision course. The trainee for the aerospace sector, 26-year-old[5] Hideki Hachitani (蜂谷 秀樹, Hachitani Hideki?),[6] handled ten other flights at the time of the near miss. Hachitani intended to tell Flight 958 to descend. Instead, at 3:54 p.m, he told Flight 907 to descend. When the trainee noticed that JAL 958 cruised at a level altitude instead of descending, the trainee asked JAL 958 to turn right; the message did not get through to the JAL 958 pilot. The trainee's supervisor, Yasuko Momii (籾井 康子, Momii Yasuko?),[7] ordered "JAL 957" to climb, intending to tell JAL 907 to climb. There was no "JAL 957" in the sky.[2]

Watanabe avoided disaster when he abruptly forced the aircraft to dive based on a visual judgment.[5] The aircraft missed each other by less than 100 meters.[8] Watanabe said that the aircraft were 35 feet apart.[9] An unidentified passenger told NHK "I have never seen a plane fly so close. I thought we were going to crash." Alex Turner, a passenger on Flight 907 and a student at Kadena High School, a school for children with parents stationed at Kadena Air Base in Okinawa Prefecture, estimated that the avoidance maneuver lasted for two seconds.[3]

Seven passengers and two crew members of the 747 sustained serious injuries; additionally, 81 passengers and 10 crew members reported minor injuries. Some unbelted passengers, flight attendants, and drink carts hit the ceiling, dislodging some ceiling tiles. [4] The maneuver threw one boy across four rows of seats.[3] Most of the injuries to occupants consisted of bruising. The maneuvers broke the leg of a 54-year-old woman.[3][10][11] In addition, a drink cart spilled, scalding some passengers. No passengers on the DC-10 sustained injuries.[12] Flight 907, with the 747's cabin bearing minor damage, returned to Haneda, landing at 4:45 PM.

Thirteen students at Kadena High School had boarded Flight 907 after returning from a school-sanctioned ROTC competition.[9] Two students from Michigan, United States, 15-year-old Meggan Wesche and 14-year-old Allison Ambrose, sustained some minor injuries and became hospitalized for a short time. Wesche, who had slipped out of her seat during the descent and became disoriented from the incident, received an X-ray and other examinations at Toho University Hospital. She said that her body felt like "the plane is going down again" even though she was on land. The following day the students left on another Japan Airlines flight and arrived in Okinawa.[3][4]

The International Civil Aviation Organization (ICAO) did not take action based on the occurrence of the near-miss.[15] Japanese authorities called for measures that would prevent similar accidents from happening, but ICAO did not further investigate the incident until after the 2002 Überlingen mid-air collision. The ICAO decided to fulfill Japan's request 18 months after the Japan Airlines incident.[8]

Tokyo Metropolitan Police Department and the Ministry of Land, Infrastructure and Transport investigated the incident.[9]

Hachitani, then 30 years old, and Momii, then 35 years old, pleaded not guilty to the charges at Tokyo District Court in 2004.[17] During the same year the lawyer for Hachitani and Momii said that the pilots of the aircraft bore the responsibility for the near miss.[18]

By November 16, 2005, 12 trials had been held since the initial hearing on September 9, 2004. The prosecution argued that the two defendants neglected to provide proper separation for the two aircraft, the instructions issued were inappropriate, and that the supervisor failed to correct the trainee. The defense argued that the lack of separation would not immediately have led to a near miss, that the instructions issued were appropriate, that the TCAS procedure was not proper, and that the Computer Navigation Fix (CNF) had faulty data.[19]

In 2006 prosecutors asked for Hachitani, then 31, to be sentenced to one year in prison and for Momii, then 37, to be sentenced to one and one half years.[20] On March 20, 2006 the court ruled that Hachitani and Momii were not guilty of the charge.[6][21][22] The court stated that Hachitani could not have foreseen the accident and that the mixup of the flight numbers did not have a causal relationship with the accident. Hisaharu Yasui, the presiding judge, said that prosecuting controllers and pilots would be "unsuitable" in this case.[23] The Tokyo District Public Prosecutor's Office filed an appeal with the Tokyo High Court on March 31. During the same year the Japanese government agreed to pay Japan Airlines and Tokio Marine & Nichido Fire Insurance a total of 82.4 million yen to compensate for the near miss.[24]

On April 11, 2008, on appeal, a higher court overturned the decision and found Hachitani and Momii guilty. The presiding judge, Masaharu Suda (須田賢, Suda Masaharu?), sentenced Hachitani, then 33, to confinement for one year, and Momii, then 39, for one year and six months. Both were placed on probation.[25][26][27] Each of the two sentences was suspended for three years.[22] Suda described the mixing of the flight numbers as a "rudimentary error."[16] The lawyers representing the controllers planned to file appeals.[28]