/ˈætrɨplɛks/[2] Á-tri-plex) is a plant genus of 100-200 species, known by the common names of saltbush and orache (or orach). The genus is quite variable and widely distributed. It includes many desert and seashore plants and halophytes, as well as plants of moist environments. The goosefoot subfamily (Chenopodioideae) of the Amaranthaceae, in which the genus Atriplex is placed in the APG II system, was formerly considered a distinct family (Chenopodiaceae).

The generic name originated in Latin and was applied by Pliny the Elder to the edible oraches.[3]

Saltbushes are extremely tolerant of salt content in the ground: their name derives from the fact that they retain salt in their leaves, which makes them of great use in areas affected by soil salination.

Atriplex species are used as food plants by the larvae of some Lepidoptera species; see the list of Lepidoptera which feed on Atriplex. For spiders such as Phidippus californicus and other arthropods, saltbush plants offer opportunities to hide and hunt in habitat that is otherwise often quite barren.

Many species are edible. However, the favored species for human consumption is Garden Orache (A. hortensis). Use of Atriplex as food is known since at least the late Epipaleolithic (Mesolithic). The Ertebølle culture presumably used Common Orache (A. patula) as a vegetable (A. patula is attested as an archaeophyte in northern Europe). In the biblical Book of Job, mallûḥa (מַלּ֣וּחַ, probably Mediterranean Saltbush, A. halimus, the major culinary saltbush in the region) is mentioned as food eaten by social outcasts (Job 30:4[4]). Grey Saltbush (A. cinerea) is used as bushfood in Australia since prehistoric times. Chamiso (A. canescens) and Shadscale (A. confertifolia) were eaten by Native Americans, and Spearscale (A. hastata) was a food in rural Eurasia. 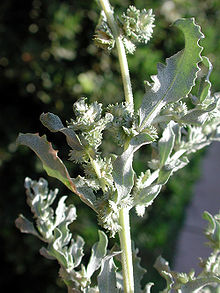 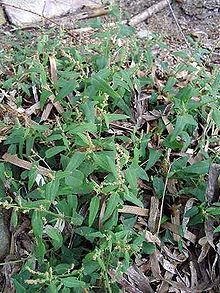 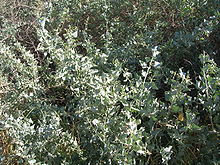 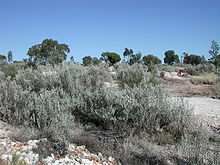 The plant grows 1–2 m (3–6 ft) in height and the leaves are used cooked or in salads. It was commonly grown in Mediterranean regions from early times until spinach became the more favored leaf vegetable. The leaves can come in red, white and green varieties. The green leaves were once used to color pasta in Italy. Another common use of orach is to balance out the acidic flavor of sorrel.[5]

Meat from sheep which have grazed on saltbush has surprisingly high levels of vitamin E, is leaner and more hydrated than regular lamb and has consumer appeal equal to grain-fed lamb.[citation needed] The vitamin E levels could have animal health benefits while extending the shelf-life and maintaining the fresh red colour of saltbush lamb. This effect has been demonstrated for Old Man Saltbush (A. nummularia) and River Saltbush (A. amnicola). For reasons unknown, sheep seem to prefer the more fibrous, less nutritious River Saltbush.[6]

Saltbushes are also used as an ornamental plant in landscaping and can be used to prevent soil erosion in coastal areas. Old Man Saltbush has also been successfully used to rehabilitate old mining sites around Lightning Ridge (Australia). 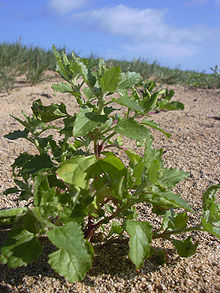