Mount Barker is a town on the Albany Highway and is the administrative centre of the Shire of Plantagenet in the Great Southern region of Western Australia. At the 2006 census, Mount Barker had a population of 1,761.[1]

The town was named after the nearby hill, which it is believed was named by Dr T B Wilson RN, in honour of Captain Collet Barker.[2]

Prior to European settlement, small groups of Aboriginal people, called the Bibbulmun (a clan of the Noongar) People, inhabited the area. These were a nomadic people who followed seasonal food supplies. The Aboriginal name for Mount Barker Hill is 'Pwakkenbak'. Dr Wilson was assisted by Aboriginal guide, Mokare, a Minang man from Albany, who expressed some discomfort at the proximity of the site to the hostile Wilmen of the interior, in his exploration of the region in 1829.[3] European settlement of the Hay River area commenced around the 1830s and the opening of the Perth/Albany Railway in 1889 helped ensure the town's future with the first store opening in 1890. Population growth continued through the 1890s and the first school and the town hall were opened in 1893.

Apple orchards were once one of the major industries in the region and thrived until the mid 1960s. Today, viticulture, wheat, canola, plantation timber, sheep and cattle are some of the main agricultural activities still carried out around Mount Barker.

The Plantagenet Shire owns and operates the Great Southern Regional Cattle Saleyards that provides services to cattle producers from within and outside the shire.

Mount Barker is also home to The Banksia Farm which boasts one of every known species of Banksia and most species of Dryandra. There is also a cafe, shop and tours of the Banksia and wildflower gardens.

The Stirling and Porongurup Range National Parks are located within the Plantagenet Shire and these, together with the local premium wine industry, have contributed to the growth of tourism in and around Mount Barker.

Available accommodation includes motels, caravan park and a number of bed & breakfasts and farm-stays in the surrounding area.

There has been a steady growth of hobby farming around the town and throughout the shire as people abandon city-life for a 'tree-change'. This has seen a corresponding increase in cottage industries offering a range of art and craft products.

A quarry to the east of the town is one of two major sources of spongolite, also called 'Mount Barker Stone'. While spongolite is commercially exploited for its absorbent qualities, it is also sometimes locally cut into bricks to use as a building material. A good example of this is the Plantagenet Players theatre in Marmion Street.

In 2011 a windfarm consisting of three wind turbines will be installed to provide power to the town of Mount Barker and surrounding areas.

Mount Barker is one of the 5 nominated subregions of the Great Southern wine region in Western Australia, which is Australia's largest wine region with a rectangle 200 kilometres from east to west and over 100 kilometers from north to south. The area has been described as 'the birthplace of the Great Southern wine region' and has won numerous awards for a variety of wines.[4] Situated as it is in the middle of the Great Southern, the continental aspects of the climate make this quintessential country for Riesling and Shiraz. While, as with the rest of the region, rainfall is winter-spring dominant, late vintage rains can create problems. Mount Barker's continentality also means greater diurnal temperature fluctuations and the occasional spring frost. The Plantagenet Plateau, with Mount Barker its centre point, is marked by its marri soils, lateritic gravelly/sandy loams coming directly from granite rock protusions. Lat: 34 36’S; Alt: 180–250 m; Hdd: 1488; Gsr: 287 mm; Mjt: 19C; Harvest: Early March to mid-April; Chief Viticultural Hazard: Spring frosts; late vintage rain.[5] Plantagenet Wines established in 1965 was one of the first wineries in the region and is located within the town boundary.[6] 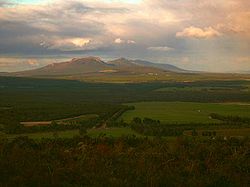 Mount Barker Hill, just 5 km from the town centre, reaches 404 metres above sea level.[7] A sealed road leads to the base of a 168 metre high TV tower - the tallest free-standing tower in the southern hemisphere[8] - on the summit of the hill. There is an aging information sign which states that the steel TV tower weighs 218 tonnes. There is also a lookout and a granite cairn with a bronze directional plate. Views extend north to the Stirling Range and east to the Porongurup Range. An elevated concrete lookout offers views South to Albany and south-west toward Denmark. On a clear day, the Albany Wind Farm is easily visible some 50 km away. In the summer months, many locals use the hill lookout to assess any risk posed by nearby fires. 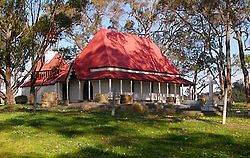 Mount Barker is also home to numerous historic buildings, such as:

Unique 'Round House' in disrepair. February 2007.

The Stirling Range lies approximately 40 km to the north-east of the town by road, via Kendenup. The Porongurup Range is a 15-minute drive to the east of the town. The two ranges have vastly different appearances and display different flora and geology. Both parks have gazetted walk trails that are especially popular during the spring wildflower season, from August to November. 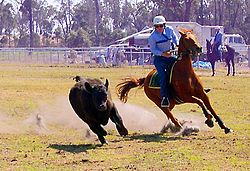 Mount Barker has a hospital and medical centre, police station, TAFE College, a Community college catering for K-12 schooling, childcare facilities plus Scouts and Girl Guides. The new shire offices were opened in the town centre in 2006.

In 2004 the state government announced preliminary funding for construction of the Mount Barker Community College. This 'One Community, One College' project will ultimately see all public schooling, from kindergarten to TAFE, located on the existing Mount Barker Senior High School site. Work commenced on the project in January 2007 and it is expected that it will cater for years 4 to 12 from 2008 with expansion to continue past that date. It is anticipated that this integrated facility, which pools resources, will act as a model for other regional communities.[11] In December 2007 funding for Stage Two, for Kindergarten to year 3, was confirmed. Construction of all stages is now complete as is the new Trade Training Centre.

Besides the public library, Mount Barker also has cultural facilities including a public art gallery that displays and offers works by local artists. There is also a popular amateur theatre company, "The Plantagenet Players", which has members from nine years old to seniors.

Emergency services in the town consist of Police and volunteers in the St John Ambulance, Fire & Rescue Service, Bush Fire Service and State Emergency Service. Training and equipment is provided by both the Shire and State Government. There are a number of charitable organisations including Rotary, Lions, Red Cross, and Anglicare.

The Great Southern Railway, which runs through town, commenced operation to Mount Barker in 1889, boosting expansion in the region. There are no longer passenger services on the line which is used primarily for grain haulage to Albany Port. 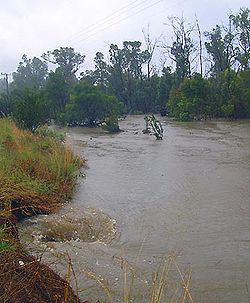 Rainfall averages from around 24 millimetres (1 in) per month in January to over 100 millimetres (4 in) in July.