A newsroom is the place where journalists—reporters, editors, and producers, along with other staffers—work to gather news to be published in a newspaper or magazine or broadcast on television, cable or radio. Some journalism organizations refer to the newsroom as the city room.

In a print publication's newsroom, reporters sit at desks, gather information, and write articles or stories, in the past on typewriters, then after the early 1980s, on computers. These stories are submitted to editors, who usually sit together at one large desk, where the stories are reviewed and possibly rewritten. Reporters generally used the inverted pyramid method for writing their stories, although some journalistic writing used other methods; some of the work of Tom Wolfe is an example of reporting that did not follow that style.

Once finished, editors write a headline for the story and lay it out (see publishing) on a newspaper or magazine page. Editors also review photographs, maps, charts or other graphics to be used with a story. At many newspapers, copy editors who review stories for publication work together at what is called a copy desk, supervised by a copy desk chief, night editor, or news editor. Assignment editors, including the city editor, who supervise reporters' work, may or may not work with the copy desk.

How a newsroom is structured and functions depends in part on the size of the publication and when it is published, especially if it is a daily newspaper, which can either be published in the morning (an a.m. cycle) or the evening (a p.m. cycle). Most daily newspapers follow the a.m. cycle.

In almost all newspaper newsrooms, editors customarily meet daily with the chief editor to discuss which stories will be placed on the front page, section front pages, and other pages. This is commonly called a "budget meeting" due to the fact that the main topic of the meeting is the budgeting or allocation of space in the next issue.

The broadcast news set of WHIO-TV in Dayton, Ohio. 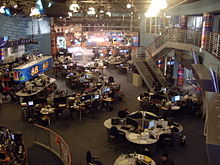 Broadcast newsrooms are very similar to newspaper newsrooms. The two major differences are that these newsrooms include small rooms to edit video or audio and that they also exist next to the radio or television studio.

The modern American newsroom has gone through several changes in the last 50 years, with computers replacing typewriters and the Internet replacing teletype terminals, and more from ethnic minority groups as well as women are working as reporters and editors, including many managerial positions. Many newspapers have internet editions, and at some, reporters are required to meet tighter deadlines to have their stories posted on the newspaper website, even before the print edition is printed and circulated. However, some things haven't changed; many reporters still use reporter's notebooks and the telephone to gather information, although the computer has become another essential tool for reporting.