Mozarabic Art refers to art of Mozarabs (from musta'rab meaning “Arabized”), Iberian Christians living in Al-Andalus, the Muslim conquered territories in the period that comprises from the Arab invasion of the Iberian Peninsula (711) to the end of the 11th century, adopted some Arab customs without converting to Islam, preserving their religion and some ecclesiastical and judicial autonomy. Initially, it can be said that all the inhabitants of the Iberian Peninsula professed the Christian religion, because all of them were submitted to the Muslim power, with the exception of some Jewish collectives that existed in the country.

The Mozarabic communities maintained some of the Visigothic churches that were older than the Arab occupation for the practice of their religious rites and were rarely able to build new ones, because, even though a certain religious tolerance existed, the authorizations for building new churches were very limited. When permitted, new churches were always in rural areas or in the cities' suburbs, and of modest size.

When the living conditions in Muslim Iberia became less tolerable and the Christian kingdoms of the north of the peninsula initiated an expansion which needed populations to replace the displaced Muslims in the conquered lands, some of these Mozarabs opted to emigrate towards these territories where they were offered land. Their Hispano-Visigothic culture had been mixing with the Muslim and it is to be supposed that this contributed to the emerging cultures of the new Christian kingdoms in all fields. However it is unlikely that they were responsible for all of the artistic innovations brought to maturity in the kingdoms of the north during the 10th century.

Concluding the first phase of the artistic process that are generally comprised in the ample concept of "Pre-Romanesque" and that corresponds with the Hispano-Visigothic art, another stylistic current was initiated in Iberia, inheriting in many aspects of the earlier style, that is known as "Asturian art" and that was identified with the artistic creations that were being produced during the 9th century in the so-called "nucleus of resistance", specifically in the territories that comprised the kingdom of Asturias. But the artistic activity, in general, and architectural, specially, was not limited to this area nor to this century, however encompassed all the northern peninsula and had continuity during the next century.

The displacement of the Christian-Muslim border to the Douro basin allowed the construction of new temples (works on which all the artistic capacity available was concentrated) in demand of the necessities of re-settling. The now prosperous Northern kingdoms were in conditions to undertake that task, as they had already been doing, without depending on the hypothetical contributions of the incorporated Mozarabs, by which it could hardly be thought that all the religious buildings and all the artistic creations are owed to these mainly rural immigrants who, on the other hand, arrived in limitation of means and of resources. It does not appear that they were in conditions to bring to completion great artistic achievements those who had barely left any evidence of this in their place of origin.

After the publication in 1897 of the well-informed work in four volumes History of the Mozarabs of Spain (Historia de los mozárabes de España) by Francisco Javier Simonet, the professor and investigator Manuel Gómez Moreno published 20 years later (1917) a monograph about The Mozarabic Churches. And it is here where the Mozarabic character is applied to the churches constructed in Christian territory from the end of the 9th century until the beginning of the 11th, and where the term "Mozarabic" is instituted to designate this architectural form and all of the related art. The denomination had success and it is the one that has been used commonly, although without much rigor.

The Mozarabic character of the temples that Gómez Moreno referred to in his book has been questionad by modern historiography, including by the not so modern, that already José Camón Aznar in his Spanish Architecture of the 10th Century (Arquitectura española del siglo X) showed himself to be against such an interpretation, and after him Isidro Bango Torviso and many others have done so, to the point that the present-day tendency shows a trend towards the abandoning of "Mozarabic Art" denomination and its substitution by "Repopulation Art" (Arte de Repoblación) to refer to that period. 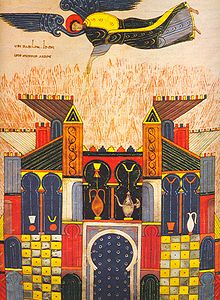 Beatus of Facundus: Judgement of Babylon

The principal exponent is religious literature: Mozarabic missals, antiphoneries and prayerbooks, created in the scriptorium of the monasteries. Examples of quality and originality of the miniatures and illuminated manuscripts are the Commentarium in Apocalypsin (Commentary on the Apocalypse) from Beatus of Liébana, Beatus of Facundus or Beatus of Tábara. Or antiphonaries like the Mozarabic Antiphonary of the Cathedral of León (Antifonario mozárabe de la Catedral de León).

Toledo and Córdoba were the most important Mozarabic centers. From Córdoba was the abbot Speraindeo, who wrote an Apologetic against Muhammad. And very important for the history of philosophy studies is the Apologetic of the abbot Sansón (864).

The principal characteristics that define the Mozarabic architecture are the following:

The Mozarabic architecture interpreted strictly in its definition, that is to say, that the Mozarabs in Muslim Iberia brought to completion, would be reduced to two examples:

Nevertheless, at a popular level, including in encyclopedias and books, the denomination that has kept prevailing is Mozarabic Art and among the most important that can be cited in Spain and Portugal, the following can be counted as Mozarabic: