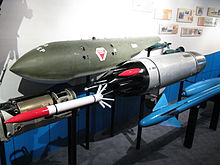 The SNEB rocket (French: Societe Nouvelle des Etablissements Edgar Brandt) is an unguided air-to-ground 68 mm (2.7 in) rocket projectile (RP) manufactured by the French company TDA Armements, designed for launch by combat aircraft and helicopters. Two other rockets were developed in the 37 mm (1.5 in) and 100 mm (3.9 in) caliber. The 37mm caliber was one of the earliest folding fin free flight rockets developed after WW2 and was developed mainly for air to air engagements and is no longer in service. The 100mm caliber is in service with the French Air Force and a few other air forces. The 68mm caliber is by far the most popular in use today in both the time span of service and numbers produce, even out pacing the Russian 57mm air to ground rocket, and is commonly referred in both military and civilian publications as the "SNEB rocket pods". Besides France, several other nations produce the SNEB 68mm rocket under license. In France today, the SNEB has been reorganized to the firm of Thomas-Brandt.

The caliber of 68 mm was preferred by the French over other international designs of 57 mm,[1] 70 mm,[2] or 80 mm.[3] The SNEB rocket projectile is propelled by a single rocket motor, and, depending on the warhead loadout on the launchers, it can be used against armoured fighting vehicles, bunkers, or soft targets.

The Systeme de Roquette A Corrections de Trajectoire (SYROCOT) is a program where a laser-guided seeker is incorporated into the design. It is compatible with the existing SNEB system. It is comparable to the US Advanced Precision Kill Weapon System project.

The SNEB rocket projectiles could be armed with the following warheads:

The French armament company of Matra produced the following types of rocket launcher for use with the SNEB 68 mm RPs: