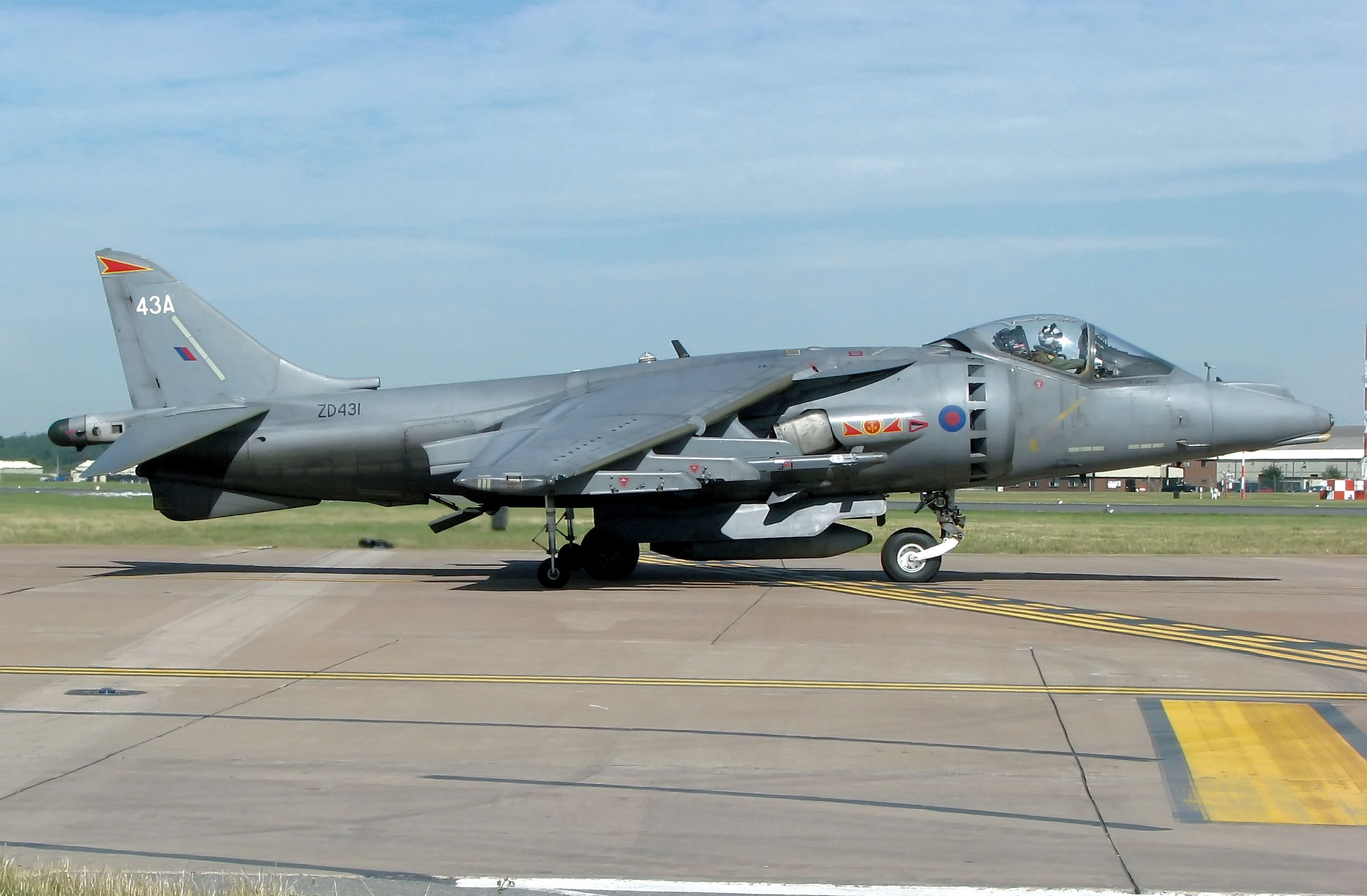 The / Harrier II (GR5, GR7, and GR9 series) is a second generation vertical/short takeoff and landing () jet aircraft used by the British (RAF) and, since 2006, the . It was developed from the earlier and is closely related to the U.S.-built AV-8B Harrier II. Both are primarily used for light attack or multi-role tasks, and are often operated from small s.

Development of a successor to the first Harrier began as a cooperative effort between (U.S.) and (UK). s eventually led Hawker to withdraw from the project, but work continued due to U.S. interest in the aircraft. Britain re-entered development in the late 1970s, producing their own version of the Harrier II based on the U.S. design. For UK variants, BAE Systems is the prime contractor and Boeing a sub-contractor.

The Harrier II is an extensively modified version of the first generation GR1/GR3 series which first flew in December 1967. The original alloy was replaced by a fuselage which makes extensive use of composites, providing significant weight reduction and increased payload or range. An all-new one-piece wing provides around 14 per cent more area and increased thickness.

The cockpit is fully integrated for day and night operability and is equipped with head-up () and head-down displays (MHDDs), a digital moving map, an (INS), and a Hands-On Throttle and Stick system ().

The pilot flies the aircraft by means of a conventional and left-hand throttle.

In RAF service, Harriers are used in the and roles. Unlike the Harrier AV8B+ upgrade, the RAF have chosen not to integrate a into its aircraft, although the aircraft retains an . The primary air-to-air missile (AAM) of the Harrier is the infrared-homing (the combination of Harrier and Sidewinder proved effective against Argentinian Mirages in the Falklands conflict), but it does not carry the medium range missile.

With the retirement of the Sea Harrier, it had been suggested that its radar could be transferred to the GR9 fleet. However, the Ministry of Defence rejected this as risky and too expensive. The Adam Ingram estimated that the cost would be in excess of £600m.

The Harrier GR7 formed the spearhead of the RAF's contribution to , the mission in . During this campaign the RAF identified significant shortcomings in its current arsenal. As a result the service ordered the and the Enhanced Paveway which incorporates GPS guidance which would negate the effects of smoke and bad weather. Using updated ordnance as well as unguided iron and cluster munitions, RAF Harrier GR7s played a prominent role in , the UK contribution to the U.S.-led war against Iraq in 2003. RAF GR7s participated in strike and close air support missions throughout the conflict. The first operational deployment of the Harrier GR9 was in January 2007 at Kandahar in Afghanistan as part of the NATO (ISAF). Harrier GR7s were deployed to Afghanistan in 2006 as part of the expanded ISAF mission in the south of Afghanistan. Reflecting the increased pace of operations, RAF Harrier GR7As saw a large increase in munitions used, mainly CRV7 rockets and laser guided bombs, used supporting ground forces since July 2006. Between July and September, the theatre total for munitions deployed by British Harriers on planned operations and Close Air Support to ground forces rose from 179 to 539. [http://www.mod.uk/DefenceInternet/DefenceNews/MilitaryOperations/RnAndRafHarrierCombatOpsGearUpAsRoyalNavyCrewsJoinTheFightAgainstTheTalebanvideo.htm]

With the withdrawal of the 's Sea Harrier in 2006, the RAF's Harrier fleet is tasked with the missions that it used to share with those aircraft. In 2006, the GR9 also entered service with the when the first former Sea Harrier squadron reformed. The GR9 is expected to stay in service at least until 2015, when the first F-35s are due. At this point, the Joint Strike Fighter should be gaining an initial operational capability.

;GR5:The GR5 was the RAF's first second-generation Harrier, with development beginning in 1976. Two AV-8As were modified to Harrier II standard in 1979 and operated as development aircraft. The first BAE built development GR5 flew for the first time on 30 April, 1985 and the aircraft entered service in July 1987. The GR5 differed from the USMC AV-8B in many subtle ways, for example avionics fit, weapons and countermeasures. Forty one GR5s were built.

;GR5A:The GR5A was a minor variant of the Harrier which incorporated changes in the design in anticipation of the GR7 upgrade. Twenty-one GR5As were built.

The GR7A is the first stage in an upgrade to the Harrier GR9 standard. The GR7A is the GR7 with an uprated Rolls-Royce Pegasus 107 engine. When upgraded to GR9 standard the uprated engine variants will retain the A designation, becoming GR9As. Forty GR7s are due to receive this upgrade. The Mk 107 engine provides around 3,000 lbf (13 kN) extra than the Mk 105's 21,750 lbf (98 kN) thrust, increasing aircraft performance during "hot and high" and carrier-borne operations.

;GR9:The Harrier GR9 is an avionics and weapons upgrade of the standard GR7. This upgrade, known as the Integrated Weapons Programme (IWP), allows the carriage of the latest smart weapons, new inertial navigation and Global Positioning systems (INS/). The new weapons being integrated are the Brimstone, Maverick, Paveway III LGB and Paveway IV PGB missiles.

The aircraft will also be fitted with Sniper targeting pods. In July 2007, BAE Systems completed the final of seven Harrier GR9 replacement rear fuselages for the UK MoD. The fuselage components were designed and built as part of a three year £20 million programme. [http://www.baesystems.com/Newsroom/NewsReleases/autoGen_10773163045.html]

;T10:The Harrier T10 is the original two seat training variant of the second-generation RAF Harrier. The RAF considered upgrading the first-generation Harrier trainer, the T4, to Harrier II standard. However due to the age of the airframes and the level of modification required, the service decided to order new build Harrier II trainers. The RAF used the USMC trainer, the TAV-8B, as the basis for the design. Unlike their American counterparts the T10s are fully combat capable. Thirteen aircraft were built.

;T12:With the upgrades bringing the GR7s to GR9 standard, the RAF requires representative trainers. These aircraft will be the T12, the T10s with the IWP upgrade.

The Harrier's unique characteristics have led to it being featured a number of films and video games.

see also=
* , an overview of the Harrier family