Boxthorn (Lycium) is a genus of the nightshade family (Solanaceae), containing about 90 species of plants native throughout much of the temperate and subtropical zones of the world. They are mostly found in dry, semi-saline environments.

Other common names include desert-thorn, Christmas berry, wolfberry, Matrimony vine, and Duke of Argyll's tea tree. Goji is a common English name made popular by several American-made juices and dried berries sometimes branded as "Tibetan" or "Himalayan" goji berries, although these terms do not geographically represent where the berries actually originate.

The generic name is derived from the Greek word λυκιον (lycion), which was a name applied by Pliny the Elder (23-79) and Pedanius Dioscorides (ca. 40-90) to a plant known as dyer's buckthorn. It was probably a Rhamnus species and was named for Lycia, the province in which it grew.[3] 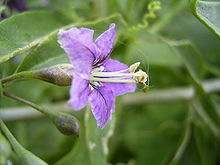 They are long-lived, perennial, thorny shrubs, with deciduous alternate, simple leaves 1–8 centimetres (0.39–3.1 in) long. The flowers are solitary or in small clusters, 6–25 millimetres (0.24–0.98 in) diameter, with a corolla of five purple, white or greenish-white petals joined together at their bases. The fruit is fleshy, multiseeded berry 8–20 millimetres (0.31–0.79 in) diameter that may be red, yellow, orange, purple or black. These fruit resemble nightshade and bittersweet berries. In some species called wolfberries or "longevity fruit" (notably L. barbarum and L. chinense), the fruit is edible.

Most species of Lycium are cosexual (all flowers have both male and female function), however, several species exhibit sexual dimorphism. Evidence suggests that sexual dimorphism has evolved more than once in the genus. There are species that have both monoecious and dioecious populations, most notably L. californicum.

The plant has been known to European herbalists since ancient times and was traded from the Far East to Europe by the Romans already, for example via Ariaca and the port of Barbarikon near today's Karachi, as mentioned in the Periplus of the Erythraean Sea. In his Naturalis historia, Pliny the Elder describes boxthorn as a medicinal plant recommended as a treatment for sore eyes and inflammation, as does Pedanius Dioscorides in his P. Dioscoridae pharmacorum simplicium reique medicae.[4]

Boxthorn is mentioned in the biblical Book of Proverbs as besetting the paths of the wicked (Proverbs 22:5). In his 1753 publication Species Plantarum, Linnaeus describes three Lycium species: L. afrum, L. barbarum, and L. europaeum[4]. 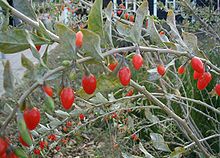 The fruit, leaves[verification needed], and bark of certain species have been used in China throughout more than 2,000 years of recorded history. Wolfberries are known in China as gǒu qǐ zǐ (枸杞子), and are processed into herbal teas, soups, juices, and alcoholic beverages. The bark is also used, it is known in Chinese as dì gǔ pí (地骨皮).

The berries may also be used whole; in traditional Chinese medicine they are always cooked, boiled either by themselves or in combination with other herbs; or as an ingredient in a soup. Whole wolfberries are used in this way for a variety of purposes in traditional Korean medicine and traditional Tibetan medicine, where boxthorn is called dre-tsher-ma ("ghost thorn"). It is a rare ingredient in kampō (traditional Japanese medicine), where the fruit is called kukoshi (クコシ) and the bark jikoppi (ジコッピ); these terms are derived from the Chinese names.

Due to its ecologial requirements, boxthorns may be useful as a crop in arid regions. However, at least African Boxthorn (L. ferocissimum) has shown to be able to spread uncontrollably and become an invasive weed in Australia.

Lycium species are used as food plants by the larvae of some Lepidoptera species including Coleophora vigilis (recorded on L. ferocissimum). 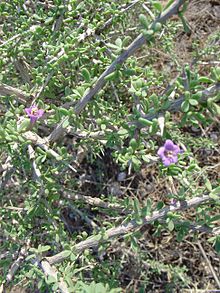 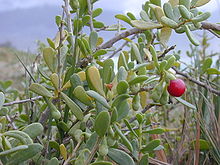