Decanter is an up market magazine on wine and spirits, published in over 90 countries on a monthly basis. The magazine content includes news from the industry, vintage guides and wine recommendations. Decanter organizes the annual Decanter World Wine Awards.

Decanter employs a 1 to 5 star wine ratings system to assess the quality of the wines it reviews. This system was popularized by Michael Broadbent in his Great Vintage Wine Book.

Decanter's online arm, decanter.com, features wine news and wine recommendations although the site covers other aspects of wine including vintage guides, a learning guide, an online archive for the magazine, auction prices and a classified section called Shopping Mall.

Decanter World Wine Awards was founded in 2004 and gained a reputation as one of the world’s most respected and influential wine competitions[citation needed]. An expert panel of tasters from around the world, chaired by Steven Spurrier, judge wines on a regional basis reflecting variety, style and retail price. The Awards are one of the most important competitions in the UK wine trade. The other main ones being the International Wine and Spirit Competition and International Wine Challenge.

Decanter Men/ Women of the Year 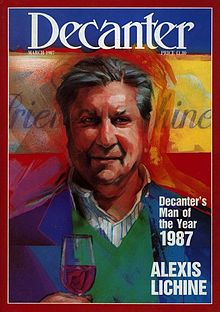 Annually highlighting a person from the world of wine, the 1987 Decanter Man of the Year was Alexis Lichine