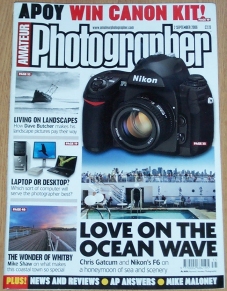 "Amateur Photographer" is a British , published weekly by , a subsidiary. The magazine provides articles on equipment reviews, photographic technique, and profiles of professional photographers.

The Test Reports from past publications can be purchased online from [http://www.amateurphotographer.co.uk/apoy/rules.php TestReports] . There are nearly 9,000 test available; consisting of reviews of cameras, lenses and other equipment.

AP (as it is referred to) is usually based around the following items:

*7 Days - Up to date information on the world of film and digital photography; including details of product launches, external competitions and upcoming events (festivals, events, galleries and camera clubs).
*Through the Viewfinder - Practical photo-technique articles from contributor Philip Dunn.
*Gallery - Readers photographs. Readers can submit up to 10 photographs (not needing to be themed) on film or digital media. A selection of these is published each week. The 'Editor's Choice' each week is paid £50.
*Test Bench - AP's world renowned tests of the latest photography equipment. All past tests can be purchased from AP if required.
*AP Answers - Technical help in response to readers letters and emails. Includes a sub section taken from the AP Website Forum.
*Critical Eye - Reader photo critique by Garry McNamara. Readers can submit up to six images as prints, slides or on CD (with original files). Prizes from sponsor are supplied alongside Garry's feedback.
*On Assignment - Garry McNamara and Gemma Padley take three readers on location for a days shooting. Each participant is loaned a Samsung digital SLR with 18-55mm zoom. Best picture of the day wins a Samsung DSLR with 18-55mm zoom lens.
*Filter - A weekly round-up of books, exhibitions and websites.
*Behind the Picture - Chris Gatcomb looks at the thinking and technique behind a winning picture.
*Vendor Adverts/Classifieds - A wide selection of UK and international equipment vendors (some offering preferential rates to AP readers); and AP's own classified ads for readers to submit.
*Picture Post - Readers letters concerning recent events, views on photography and feedback on AP articles. Sponsored by UK, film or digital media is provided for all letters published. Also contains "Back Chat", an article introduced by then Editor Garry Coward-Williams, where and essay on a photography related subject from a reader is published.
*Back From the Front - Weekly essay from a figure from the world of photography with a once a month contribution from Roger Hicks.
* - A weekly comic strip by Aaron Johnson

Amateur Photographer of the Year (APOY)

"APOY" is an annual competition run by Amateur Photography, and is open to anyone that earns less that 10% of their yearly salary from photography. [cite web|url=http://www.amateurphotographer.co.uk/apoy/rules.php| |title=APOY Rules]

The entries are limited to one photograph per reader per month.

Each years competition is run on a monthly basis, with each month having a dedicated "theme" for the images to adhere to. The APOY judges than narrow the entries down to a short list of 50. From there, the final 'Top 30' are awarded points and published in the magazine; with the top three places being awarded prize donated by Canon UK. All 30 point scoring photographers are entered into the league table; which is edited after each round. After all ten rounds, the photographer with the highest score in the league table is crowned the Amateur Photographer Of the Year and wins £5,000 worth of Canon vouchers to be remdeamed against the purchase of personal photographic goods (defined as "Canon Consumer Imaging Products"). Since 2008, took over Canon as the prize awarder.

More information can be found on the [http://www.amateurphotographer.co.uk/apoy/index.php APOY page] of the AP website.

*Editor: Damien Demolder - A former professional photographer, Damien has worked on IPC Media photography titles since 1997. He served three years in the AP Features Department, before working as Technical Editor and Deputy Editor for four years. He was promoted to the position of Editor after the promotion of Garry Coward-Williams elsewhere within IPC Media in February 2007.

*Features Editor: - Joined the "" in 1964 as a 15-year old boy, followed by stints working for the "Keystone Press Agency", The Daily Sketch, Daily Mail, The National Enquirer in America and then, finally, the Daily Star. A previous winner of "The British News Photographer of the Year", Bob also won a "World Press award" for his prison pictures of .

*News Editor: Chris Cheesman is the first port of call for relaying photography related news. Before joining AP in 1999 Chris worked as a news reporter and feature writer on business magazines and has journalistic experience both inside and outside photography. He always carries a camera.
*Deputy Production Editor: Brendan Maguire
*Features Assistant: Gemma Padley
*Deputy Art Editor: Simon Warren - In his other life, Simon is a competitive cyclist.
*Designer: Antony Green
*Sub-Editor: Jeff Meyer

*Technical Writer: Barney Britton http://www.barneybritton06.blogspot.com/ - Joined the AP staff in 2006, after a career as a professional music and theatre photographer.

*Photo-Science Consultant: - An renowned expert on the science of photographer, as well as the inventor of the Paterson range of developers, Geoffrey was previously the Editor of the "British Journal of Photography" for 21 years. He is also known for exposing the hoax and advising investigators into the assassination of U.S. President .
*Studio Manager: Alan McFaden

*A Matter of Opinion author: Roger Hicks - Born in , Roger stumbled into photography in 1966. After various job (law, teaching, accounting) he turned to professional photography in 1975 at a London advertising studio. His first book was published in 1980, and then turned full time to freelance photography, writing and journalism in 1981. [cite web|url=http://www.rogerandfrances.com/| | title="About Us" on the website of Roger Hicks and Francis Schultz
*AP Administrator: TheFatController (AKA: Myk Ripley)]

*Joe Cornish - Landscape photographer, known for this large-format work and commissions for the National Trust.
*Ivor Matanle - Photographer, journalist and camera/photography historian, Ivor writes the "Classics to Use" articles for AP, as well as answering readers questions in "AP Answers" in relation to classic and historical cameras.