The 280ZX was a complete redesign, retaining only the L28 inline-6 engine and other driveline components from the 280Z. Both two-seater and four-seater (2+2) designs were offered. For the first time, the 2+2 was a new design rather than a stretched version of the two-seater.

With a focus on the oil crisis of the late 1970s, Nissan improved fuel economy, emissions, and aerodynamics over the first generation Z-Cars. In addition, high-end audio systems were standard.

The 280ZX adopted suspension similar to that of the concurrent Bluebird 910, with MacPherson struts in front and semi-trailing arm independent in the rear. The wheelbase was up from its predecessor (90.7 in (2,304 mm)) to 91.3 in (2,319 mm) for the two-seater.

The 280ZX's body was redesigned with aerodynamics in mind. By closing in the open grille of the first generation Z-Car and through other improvements taken from wind-tunnel testing, the drag coefficient was reduced from 0.467 to 0.385, and the lift coefficient from 0.41 to 0.14. The new design had a lower center-of-gravity and near 50/50 weight distribution in both 2-seater and 2+2 designs. The rear of the car was stretched to accommodate a larger 80 L (21.133 U.S. liquid gallons) fuel tank. Overall, the new body design gave better fuel economy and high-speed stability (one of the known issues from the first generation Z-car).

It is a common misconception that the 280ZX's L28 engine is less powerful than the L24 engine of the 1970 240Z: the difference is due to Nissan adopting the SAE net standard of power measurement, which resulted in lower power ratings than the earlier gross figures and added emissions. However, Nissan designers deliberately sacrificed raw acceleration for improved fuel economy in the 280ZX, so the early 1979 models rated at 145 hp (108 kW) actually had slower acceleration than the 240Z, largely due to increases in weight and emissions control strangling. This overall performance deficit was not addressed until the release of the 280ZX Turbo in 1981.

The 280ZX was branded in the American and Australian markets as the Datsun 280ZX; and in the local Japanese market as the Fairlady Z. In the 1979 model year in the American market, it was co-branded Datsun by Nissan through the 1983 model year. These were considered transition years as Nissan began to phase in their new global brand under the Nissan name.

The Japanese market got both 2.0 L and 2.8 L engines. The 2.0 L-engined Fairlady 280Z used the L20 engine common in Nissan family cars of the same era. Export markets all got the L28-powered version. The preference for 2.0 L engines in the Japanese market was a by-product of taxation laws.

Two trim levels were offered in America, with a no-frills 2-seater and the Grand Luxury (GL) ZX carrying the full equipment list. Leather seats were optional, and an optional digital instrument cluster was introduced in 1982.

Early reviews of the 280ZX were mixed. Some lamented the transformation the Z-car had made to a grand tourer, while others appreciated the improvements in refinement, comfort, and overall market appeal. The sales figures soon proved the Nissan designers right, with the 280ZX becoming a sales success.

In 1979, Datsun homologated a high-downforce whale-tail type spoiler for the Datsun 280ZX by producing 1,001 280ZX-R cars. These cars also had distinctive body decals and ZX-R logos. These cars were identical to the other cars of this year with the exception of the whale-tail and decal package.

From 1980 onwards, the 280ZX was available with a T-bar roof (on both the 2-seater and 2+2 body shapes). The T-bar roof panels could be removed and stored in bags in the rear of the car.

In 1980, a limited edition "10th Anniversary" car was released. Available in either black/gold or black/red two-tone paint, these cars came with leather seating, and other special trim features. A total of 3000 of these cars were built - - 2500 in black and gold, and only 500 in the red and black.

A turbocharged model (using the L28ET engine rated at 180 bhp (134 kW; 182 PS)) @5600RPM and 203 ft•lbs (275n•m) of torque @2800RPM was introduced to the US export market in 1981. At the same time the Japanese domestic market received L20ET (2L turbo) in both manual and automatic transmissions. Nissan's concerns about reliability of their own 5-speed transmission when combined with the additional torque of the 2.8L turbo engine, meant no manual transmission was offered with the L28ET engine in 1981. Other export markets (the UK and Australia) continued to receive only the normally aspirated 2.8L engine with manual or automatic transmission.

The turbocharged 280ZX used a single Garrett AiResearch TB03 with an internal wastegate, and no intercooler. Nissan's design philosophy at the time led to boost being limited to a sedate 6.8psi (0.47 bar), despite the lowered compression of the turbo engine (7.4:1 with dished, cast aluminum pistons). Additional changes over the naturally aspirated engine included a higher volume oil pump, an oil cooler on automatic models, and Nissan's Electronic Concentrated Control System (ECCS).

At the time of release into the US market, the 280ZX Turbo was the fastest Japanese import in the American market.

One criticism of the early 280ZX was a reduction in spring rates, giving a softer ride, and making the car rather difficult to drive hard through corners without transient oversteer, which was a feature of trailing-arm rear suspensions. The release of the turbocharged model in 1981 saw the introduction of a revised rear suspension, which Nissan continued to use in the 1982 and 1983 Turbo, as well as the non-turbo from mid-1982 onward.

Car and Driver had another complaint of the 280ZX Turbo. In a 1981 comparison of several performance cars, they decided that while the acceleration was on par with other sports cars of the era, the braking system was prone to fading away completely before a lap could be completed on their test track. 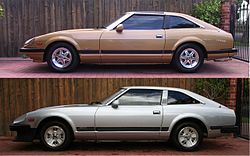 Series II (above) and Series I (below)

Nissan gave the 280ZX a face lift in 1982 with revised NACA ducting in the hood, new alloy wheels (14 in. 6-spoke alloys for non-turbo models, and 15 in. 4-spoke alloys for turbo models), a revised B-pillar garnish, new pin-stripe style tail-lights, and rubber bumper over-riders replaced the earlier model's chrome and rubber items. Interior changes were minor but included new seat trim styling. The 1982 model also was the first to offer the popular voice warning system, which warned the driver when headlights were left on after the vehicle was turned off, if the parking brake was on while the vehicle was in motion, and many other warnings.

This facelifted model has since come to be called the "Series II" 280ZX.

Power steering became standard equipment with a new rack-and-pinion system, rather than recirculating ball. Changes were made to the rear suspension layout, which also meant the exhaust pipe now exited from the left, rather than right-hand side.

The (US market only) 280ZX Turbo was offered with a manual transmission; this was a Borg-Warner T-5 5-speed model (this was the first Nissan and Japanese car in general which used a non-Japanese transmission; the T-5 was also used, most notably, in the GM F-bodies and Ford Mustang) in addition to numerous other American domestic vehicles. The T-5 was only available in 1982 and 1983. The 1981 Turbo was only available as an automatic.

Spring rates and sway bars were revised, which largely addressed the handling nervousness of the early 280ZX Turbo, and reviews confirmed that the 1982 280ZX Turbo was the most sporting Z-car since the original 240Z of 1970. 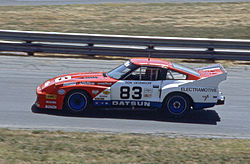 The 280ZX proved successful in various classes of racing, particularly in the US. Significant results include:

The most notable driver to be associated with the car was actor Paul Newman, who raced with the Bob Sharp Racing team. He also helped to promote the car, even by starring in a series of commercials.