The Nissan Quest is a minivan manufactured since 1993 by Nissan, and is now in its fourth generation. The first two generations of the Quest were a joint venture with Ford, which marketed a rebadged variant as the Mercury Villager. The vans debuted at the 1992 North American International Auto Show in Detroit.

Both vehicles were initially powered by the 3.0 L Nissan VG30E V6 until 1999, when the Quest received the 3.3 L version of the same engine and a few minor updates, including a driver side sliding door, and grill and rear redesigns. The Quest was later completely redesigned for 2004, while the Villager was discontinued and replaced with the Freestar-based Mercury Monterey. The third generation model was built on the FF-L platform, which it shares with the Altima, Maxima, and Murano. It also shares the award-winning 3.5 L VQ engine with those cars. The fourth generation model is built on the same platform as the 2011 Nissan Elgrand.

The Nissan Quest was a new model made by Nissan to compete in the minivan segment. The Quest was a successor to the Axxess, which was sold in the United States in 1990 only and in Canada from 1990-1995. It also replaced the rear-wheel drive Vanette, also discontinued in 1990. The Quest was initially powered by Nissan's 3.0 L VG30E SOHC engine that made 151 hp (113 kW) and 182 lb·ft (247 N·m). Ford required that Nissan make some design changes to the VG30E before they would agree to use it in the Villager and Quest. One of the requirements from Ford was that the engine was to be modified to become a non-interference or free-running engine. (Thus if the timing belt breaks, there would be no damage to the valves). Other changes included the addition of an oil level sensor and relocating the oil filter assembly for better access. The Quest was available as XE or GXE models. Because of manufacturing issues, Nissan had an arrangement for Ford to assemble the minivan in North America, and in turn they were allowed to rebadge it and sell it under the Mercury brand as the Villager. Many of the interior parts, including the radio, heater controls and power windows controls were adapted from Ford, and were similar to the Ford Aerostar. This generation of the Quest and Villager was built at Ford's Ohio Assembly plant in Avon Lake, Ohio. The van shared the modified version of the VG30E from the U11, and early J30 Maximas, as well as the 4-speed automatic transmission from the Maxima. The Quest/Villager engine seems to have a serious flaw in the crankshaft, as they break at the front stub. Nissan increased the diameter from 25 to 27 mm around 1995. The Quest is distinguishable from the Mercury Villager by a different grille, side trim, front and rear bumpers, and tail lights. 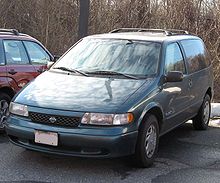 Seating was for 7, with a removable 2-seater bench in the middle, allowing the third row bench of 3 seats to slide up (either folded up for more room or down for passengers) behind the front for more rear cargo room. 1994 the first year for the driver's side airbag, with a passenger airbag added in 1996. That year saw the introduction of changes to the front and rear fascias, as well as headlights and tail lamps and the elimination of the motorized shoulder belts.

For 1999, the Quest was redesigned, and it gave the exterior a more aerodynamic look, and the driver's side sliding door. The Quest also got a power boost via the 3.3 L VG33E SOHC engine, making 171 hp (128 kW) and 200 lb·ft (270 N·m) of torque. The XE trim was discontinued and the GXE was moved as the base model. Two new trim levels were also introduced: the top of the line GLE and the sport model SE. This Nissan Quest model became the first Nissan minivan with 4 doors since the 1995 Nissan Axxess.

The 2001 Quest received various minor improvements. Styling front and rear was updated, along with new alloy wheels on all models. The entry-level GXE gained a rear stabilizer bar, while the SE received acceleration-sensitive strut valving and a strut tower brace. New interior gauges and fabrics as well as a 130-watt sound system were standard on SE and GLE. Luxury GLE models also received an in-dash six-CD changer and a wood and leather-trimmed steering wheel. An optional overhead family entertainment system replaced the former floor-mounted model, though it could still be specified for SEs and GLEs equipped with a sunroof. Front seatbelts were given pretensioners. The 2001 Quest was also slightly longer, with more cargo space than the previous generation. The 2002 Nissan Quest was not sold in Canada. The Quest would not return to Canada until the third generation model arrived in 2004.

By the end of this generation, both Honda and Toyota marketed solely long-wheelbase minivans. No Quest models were marketed for the 2003 model year.

After the 2002 discontinuation of the Mercury Villager, the third generation Quest was redesigned for the 2004 model year using the previous-generation Nissan Altima and Nissan Maxima platform,Nissan's FF-L platform, in a package slightly longer than the Chrysler long-wheelbase minivans. Production moved to a new plant in Canton, Mississippi.

The third generation Quest features an unusual moonroof glass arrangement, and positions for 2 DVD screens with aux input. Also featured in the SE model were side front airbags, curtain airbags for all rows, VSC (Vehicle Stability Control), Traction Control, dual power doors and power rear hatch, Bose audio with RDS and folding second row seats, dual climate control, and rear backup sensors. Nissan redesigned the front grill and the dashboard for the 2007 model. They also moved the DVD player from under the front passenger seat to the IP stack.

The Quest did not return for the 2010 model year, with Nissan stating that the automaker needed room at the Canton plant for production of a commercial vehicle based on the Nissan NV2000 concept.[1]

The Quest suffered from various quality issues in the 2004 model year. Most were addressed near the end of that model by an engineering team sent from Japan to help with the new plant in Canton. Vehicles already sold here fixed by dealers with many Technical Service Bulletins. Also produced in this plant were the Nissan Titan and Infiniti QX56, which also had various quality issues in the first year.

The fourth generation Quest is built at the Shatai Kyūshū plant in Japan for 2010. The platform is shared with the current generation Nissan Elgrand.[2] It is powered by Nissan's 3.5L VQ series engine with 260 hp (194 kW). Front wheel drive is standard, and the USDM version has an extra full 5 inches (13 cm) of width to avoid the tall skinny look of Japanese vans. The Quest went on sale in North America in early 2011 as a 2011 model.[1][3] Nissan revealed five teaser images of the 2011 Quest revealing the exterior and interior.[4] In Japan the Elgrand competes with the Toyota Alphard and the Honda Elysion. The 2011 Nissan Quest was unveiled at the 2010 Los Angeles International Auto Show.