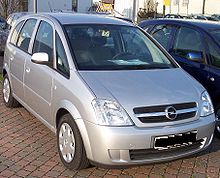 Opel Meriva MK1 (facelift), one of the first mini MPVs based on superminis.

Mini MPV (MPV stands for multi-purpose vehicle, although the full name is rarely used) is a car classification used to describe superminis or subcompacts which have taller build, fitting below the compact MPV and large MPV classifications.

Differences from other vehicles

Other differences between the two classes of cars focus on their target markets. Leisure activity vehicles are very similar to panel vans, the former tend to have less expensive materials and building quality and are offered as a supermini and small family car alternative with a better interior room for the price. In contrast, mini MPVs have more or less the same qualities as superminis. With their increased interior room, mini MPVs are usually more expensive than a supermini or leisure activity vehicle, and sometimes as much as a small family car.

Definition of a mini MPV

If a mini MPV is defined by external dimensions, the upper length limit is more or less clear: the Nissan Note, the largest mini MPV, is 4085 mm long and the Scion xD, the smallest compact MPV, is at 3930 mm. On the contrary, the lower limit is somehow blurred.[citation needed] The Renault Modus (3795 mm) and the Peugeot 1007 (3730 mm) are in a grey area between mini MPVs and city cars.[citation needed]

The height is also relevant to distinguish a mini MPV and a supermini; this limit is not very well defined either. The Renault Modus (1590 mm) is usually considered a mini MPV, while the Nissan Micra (1540 mm) is mainly regarded as a supermini. Any vehicle of the size under 1500 mm will be almost always considered a supermini, and models above 1600 mm will never be described by that term.[citation needed]

Some people think that the differences between a mini MPV and a supermini are more related to the car's architecture, with seat and engine location as relevant elements to separate both types of cars. Or a small window place on the car's body between the windscreen and front door. Or additional C-pillar at back of a hatchback car.