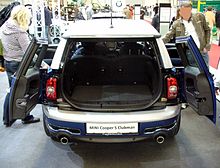 Introduced for the 2008 model year the Mini Clubman is an estate variant of the Mini two-door hatchback.

The Clubman features access to its cargo volume via bi-parting rear doors, also known as barn doors or Splitdoors. All Clubman models, irrespective of market, feature a pair of bi-parting side doors, marketed singlarly as the Clubdoor, which are always located on its right side of the body – irrespective of market. This in turn creates differences between right and left-hand driver markets. Because (irrespective of market) the steering wheel will preclude the driver's seat from folding as far forward as the passenger seat, left-hand drive markets feature increased access to the rear seat via. For right-hand drive markets, including the car's home market, the bi-parting door is located on the road side of the car, requiring rear passengers to exit into the road.[1]

In 2007, Torque magazine said the Clubman is "essentially a shooting-brake design."[2]

The use of the name "Clubman" is a departure from Mini tradition. "Clubman" was originally the name given to the 1970s face-lift of the classic Mini, which mostly resulted in a squared-off front end, whereas the classic Mini estates had traditionally been named "Traveller" or "Countryman". However, BMW did not initially purchase the rights to use those names.

The model variants are the same as the hatch version being in available in One, Cooper, Cooper S, and Cooper D variations.

Engine and transmission selections are identical to those used in the Hatch/Hardtop model, except the 66 kW (90 PS; 89 hp) One Diesel; and the rear suspension set-up shares many of the same designs features including the rear trailing arms and the anti-roll bars.