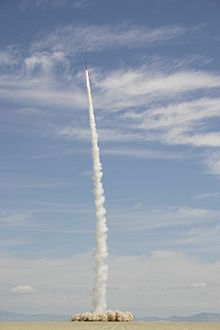 The Civilian Space eXploration Team, known as CSXT, is a team of around 30 civilians interested in private spaceflight.[citation needed] The team was created by Ky Michaelson.[citation needed] It has conducted multiple rocket launches in an attempt to establish altitude records. CSXT claims to be the first entity to officially launch an amateur rocket into space.[citation needed]

Prior privately-funded space launches were achieved by the Orbital Sciences Pegasus, and many amateur teams have made unverified claims of rocket flights exceeding the boundary of space.[citation needed]

Each team works together to design the rocket.[1]

The D.R. Hero rocket was launched in August 1995.[citation needed] It was dedicated to stuntman Dar Robinson, a late friend of Ky Michaelson.[citation needed] The rocket was 18 feet (5 m) tall and 6 inches in diameter. It was anticipated to reach 100,000 feet (30,000 m). The actual launch height was not reported. This rocket failed in a large CATO (Catastrophe At Take Off) just above the ground.[1]

Launched in August 1996 this rocket, was also 18 feet (5 m) tall and 6 inches in diameter.[citation needed] The name of the Rocket is attributed the largest contributing sponsor, Joe Boxer.[citation needed] It was anticipated to reach 70,000 feet (21,000 m), however, the actual height obtained was only 66,000 feet (20,100 m).[citation needed] The entire rocket was recovered after what was considered a successful flight. All of the rocket's systems functioned as intended and this was claimed to be the first amateur rocket to be recovered intact after reaching more than 50,000 feet (15,000 m).[2]