Textile is measured in various units, such as: the denier and tex (linear mass density of fibres), super S (fineness of wool fiber), worst count, and yield (the inverse of denier and tex). Yarn is spun thread used for knitting, weaving, or sewing. Thread is a long, thin strand of cotton, nylon, or other fibers used in sewing or weaving. Both yarn and thread are measured in terms of cotton count and yarn density. Fabric is cloth, typically produced by weaving or knitting textile fibers, and is measured in units such as mommes (momme is a number that equals the weight in pounds of a piece of silk if it were sized 45 inches by 100 yards), thread count (a measure of the coarseness or fineness of fabric), ends per inch (e.p.i), and picks per inch (p.p.i).

Thread made from two threads

Denier is a unit of measure for the linear mass density of fibers. It is defined as the mass in grams per 9,000 meters. In the International System of Units the tex is used instead (see below). The denier is based on a natural standard: a single strand of silk is one denier. A 9,000 meter strand of silk weighs one gram. The term denier is from a French coin of small value (worth 1/12 of a sou). Applied to yarn, a denier was held to be equal in weight to 1/24 oz (this does not have units of mass per length!).

The term micro-denier is used to describe filaments that weigh less than one gram per 9,000 meter length.

One can distinguish between Filament and Total denier. Both are defined as above but the first only relates to a single filament of fiber (also commonly known as Denier per Filament or D.P.F) whereas the second relates to a yarn, an agglomeration of filaments.

a unit of fineness for fibres

The denier system of measurement is used on two and single filament fibers. Some common calculations are as follows:

In practice measuring 9,000 meters is both time-consuming and wasteful. Usually a sample of 900 meters is weighed and the result multiplied by 10 to obtain the denier weight.

One can calculate the diameter of a filament given its weight in denier with the following formula:

where ρ represents the material's density in grams per cubic centimeter and the diameter is in cm.

Tex is used for measuring fiber size in many products, including cigarette filters, optical cable, yarn, and fabric.

One can calculate the diameter of a filament given its weight in dtex with the following formula:

where ρ represents the material's density in grams per cubic centimeter and the diameter is in cm. Worsted count (or spinning count) is an indirect measure of the fineness of the fiber in a worsted wool yarn expressed as the number of 560-yard [1] (1 yard = 0.9144 meters) lengths (hanks) of worsted yarn that a pound (0.45359237 kilograms) of wool yields. The finer the wool, the more yarn and the higher the count. It has been largely replaced by direct measures.

Thread is a cotton yarn measure, equal to 54 inches.

Mommes (mm) are units of weight traditionally used to measure the density of silk. It is akin to the use of thread count to measure the quality of cotton fabrics, but is calculated in a very different manner. Instead of counting threads, the Momme is a number that equals the weight in pounds of a piece of silk if it were sized 45 inches by 100 yards. This is because the standard width of silk is 45" wide, though silk is regularly produced in 55" widths, and, uncommonly, in even larger widths.

The usual range of momme weight for different weaves of silk are:

The higher the momme, the more durable the weave, and the more suitable it is for heavy-duty use. And, the heavier the silk, the more opaque it becomes. This can vary even between the same kind of silk. For example, lightweight charmeuse is translucent when used in clothing, but 30mm charmeuse is opaque. 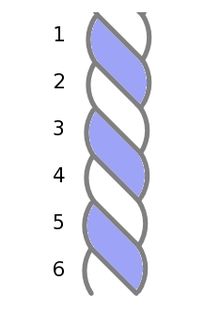 Thread count is a measure of the coarseness or fineness of fabric. It is measured by counting the number of threads contained in one square inch of fabric or one square centimeter, including both the length (warp) and width (weft) threads. The thread count is the number of threads counted along two sides (up and across) of the square inch, added together.[4] It is used especially in regard to cotton linens such as bed sheets, and has been known to be used in the classification of towels.

Thread count is often used as a measure of fabric quality, so that "standard" cotton thread counts are around 150 while good-quality sheets start at 180 and a count of 200 or higher is considered percale. Some, but not all, of the extremely high thread counts (typically over 500) tend to be misleading as they usually count the individual threads in 'plied' yarns (a yarn that is made by twisting together multiple finer threads). For marketing purposes, a fabric with 250 two-ply yarns in both the vertical and horizontal direction could have the component threads counted to a 1000 thread count although "according to the National Textile Association (NTA), which cites the international standards group ASTM, accepted industry practice is to count each thread as one, even threads spun as two- or three-ply yarn. The Federal Trade Commission in an August 2005 letter to NTA agreed that consumers 'could be deceived or misled' by inflated thread counts.[5] In 2002, ASTM proposed a definition for "thread count" [6] that has been called "the industry's first formal definition for thread count".[7] A minority on the ASTM committee argued for the higher yarn count number obtained by counting each single yarn in a plied yarn and cited as authority the provision relating to woven fabric in the Harmonized Tariff Schedule of the United States, which states each ply should be counted as one using the "average yarn number."[8]

Ends per inch (or e.p.i.) is the number of warp threads per inch of woven fabric.[9] In general, the higher the ends per inch, the finer the fabric is.

Picks per inch (or p.p.i.) is the number of weft threads per inch of woven fabric.[9] A pick is a single weft thread,[9][10] hence the term. In general, the higher the picks per inch, the finer the fabric is.