Nymphalis antiopa, known as the Mourning Cloak in North America and the Camberwell Beauty in Britain, is a large butterfly native to Eurasia and North America. See also Anglewing butterflies. The immature form of this species is sometimes known as the spiny elm caterpillar. Other older names for this species include Grand Surprise and White Petticoat. A powerful flier, this species is sometimes found in areas far from its usual range during migration. It is also the State Insect of Montana. 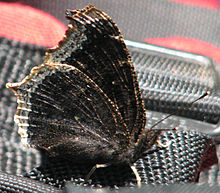 Nymphalis antiopa has a wingspan of 62–75 mm. The upper side of the butterfly is colored in a very dark red, with a bright, yellowish border around the wings. There is a darker band with bright blue spots between the border and the dark red inner side. Sexes are similar, although the females are slightly larger.

These butterflies lay eggs in clusters around twigs of their favored food plants, in Europe, generally Grey Willow (Salix cinerea) and in North America, generally Black Willow (Salix nigra) but also other willow species, as well as poplar, elm, birch, and hackberry. The larvae feed gregariously, and are black and spiny, with fine white speckles, and a row of red spots running down the back. They disperse to pupate and emerge after about three weeks. Soon after emergence, they will disperse further from their breeding grounds in order to find food (sometimes nectar, but more commonly tree sap) to build up fat stores for hibernation, and will often enter parks and gardens to do so. They are single-brooded and hibernate as adults.

Throughout its range, this species is generally considered a butterfly of woodlands, though it may occasionally be found in drier areas such as the deserts of western North America. During migration, they may be found in almost any habitat. The Mourning Cloak was adopted as the state butterfly of the State of Montana in 2001.

In North America, N. antiopa ranges from the northern tundra to central Mexico. It is also found throughout continental Europe to eastern Siberia and Japan. Migrants arrive in Great Britain most years during summer and autumn, but numbers are usually very low. There is no evidence that the species breeds in Britain; it is thought that mild, wet winters prevent them from surviving there for very long. The 'Butterfly Farmer' L. Hugh Newman raised thousands for release at his 'farm' in Bexley, but none were seen the following spring. Specimens stored in his refrigerator for the winter survived however.

In several European countries other than Britain with Germanic languages, the name for this butterfly literally translates to "Mourning Cloak", such as German "Trauermantel", Swedish "sorgmantel", and Norwegian "Sørgekåpen". This suggests it is a name which came with Scandinavian or German rather than with British settlers, for whom this species would be rather less familiar.

The name originated from the discovery of two individuals at Coldharbour Lane in Camberwell in August 1748. Camberwell is in South London, about three miles south of London Bridge—in reporting this, the author Harris named the species Grand Surprise or Camberwell Beauty (Bretherton & Emmet, 1990). It has been suggested that the "pair" were stowaways on ships bringing timber from Scandinavia.[citation needed]

The poem Unconscious came a beauty by May Swenson mentions the Mourning Cloak (or the similar looking Red-spotted Purple) – a butterfly that makes her pause and think, while writing. The poem is also a word-picture or iconograph – the lines are laid out to look like a butterfly. In the Doomspell Trilogy by Cliff McNish, Camberwell Beauties are the main icon of the baby Yemi. They act as his protectors and guides and Yemi's magic enlarges them to the size of cats.