A sprocket and roller chain
This article is about a gear or wheel with metal teeth. For other uses, see Sprocket (disambiguation).

A sprocket[1] or sprocket-wheel[2] is a profiled wheel with teeth, cogs,[3] or even sprockets[4] that mesh with a chain, track or other perforated or indented material.[5][6] The name 'sprocket' applies generally to any wheel upon which are radial projections that engage a chain passing over it. It is distinguished from a gear in that sprockets are never meshed together directly, and differs from a pulley in that sprockets have teeth and pulleys are smooth.

Sprockets are used in bicycles, motorcycles, cars, tracked vehicles, and other machinery either to transmit rotary motion between two shafts where gears are unsuitable or to impart linear motion to a track, tape etc. Perhaps the commonest form of sprocket is found in the bicycle, in which the pedal shaft carries a large sprocket-wheel which drives a chain which in turn drives a small sprocket on the axle of the rear wheel. Early automobiles were also largely driven by sprocket and chain mechanism, a practice largely copied from bicycles.

Sprockets are of various designs, a maximum of efficiency being claimed for each by its originator. Sprockets typically do not have a flange. Some sprockets used with timing belts have flanges to keep the timing belt centered. Sprockets and chains are also used for power transmission from one shaft to another where slippage is not admissible, sprocket chains being used instead of belts or ropes and sprocket-wheels instead of pulleys. They can be run at high speed and some forms of chain are so constructed as to be noiseless even at high speed.

In the case of bicycle chains, it is possible to modify the overall gear ratio of the chain drive by varying the diameter (and therefore, the tooth count) of the sprockets on each side of the chain. This is the basis of derailleur gears. A 10-speed bicycle, by providing two different-sized driving sprockets and five different-sized driven sprockets, allows up to ten different gear ratios. The resulting lower gear ratios make the bike easier to pedal up hills while the higher gear ratios make the bike faster to pedal on flat roads. In a similar way, manually changing the sprockets on a motorcycle can change the characteristics of acceleration and top speed by modifying the final drive gear ratio. 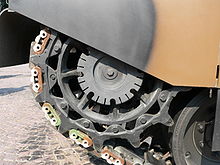 In the case of vehicles with caterpillar tracks the engine-driven toothed-wheel transmitting motion to the tracks is known as the drive sprocket and may be positioned at the front or back of the vehicle, or in some cases, both. There may also be a third sprocket, elevated, driving the track. 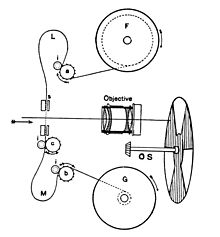 Moving picture mechanism from 1914. The sprocket wheels a, b, and c engage and transport the film. a and b move with uniform velocity and c indexes each frame of the film into place for projection.

Sprockets are used in the film transport mechanisms of movie projectors and movie cameras.[7] In this case, the sprocket wheels engage film perforations in the film stock. Sprocket feed was also used for punched tape and is used for paper feed to some computer printers.