Deathbird (Cal'syee Neramani-Summers) is a fictional character. She is a Marvel Comics supervillainess, an adversary of the X-Men. Created by writer Chris Claremont and artist Dave Cockrum, she first appeared in Ms. Marvel #9.

Deathbird is part of a segment of the extraterrestrial Shi'ar race that possesses talon-tipped wings. She is the hated sister of the Shi'ar empress Lilandra Neramani, the mother of the Shi'ar warrior, Deathcry, and constantly seeks to usurp her sister's throne. She is also a sister of D'Ken, the first depicted ruler of the Shi'ar. 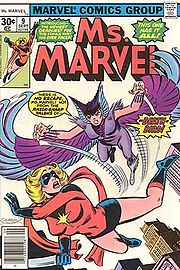 Deathbird was born Cal'syee Neramani to the ruling house of the Shi'ar Imperium on the Aerie (now known as Chandilar), native world of the Shi'ar. Her name was stripped from her after as it was prophesied that she was destined to commit great evil. She was exiled after brutally murdering both her mother and an unnamed sister.

During this exile, she first appeared on Earth and became an associate of MODOK and AIM at some point. Following AIM's orders, she battled Ms. Marvel in New York one evening after Carol Danver's Park Avenue penthouse was destroyed by a bomb. The skirmish was interrupted after Deathbird severely injured the female fury, who got distracted by trying to save the lives of two small children.[3] It later resumed when Carol, going undercover, discovered that AIM had a secret headquarters underneath Alden's Department Store. The battle between the two seemingly ended with Deathbird's demise and MODOK's escape, after betraying her. Whether Deathbird sought revenge on either Danvers or AIM remains unknown. She did battle Hawkeye while still on Earth.[4]

A little while later, it came to be that her younger sister Lilandra became Majestrix of the Empire following the events that left their brother, D'Ken, comatose. Deathbird decided to take the throne for herself, and allied with the councilman Samedar and the alien parasites called the Brood and renegade members of the Imperial Guard in an attempted coup.[5] The X-Men defeated her and her allies, but not before being infected with the Brood (although they were ultimately cured thanks to the efforts of Binary and the Acanti Soulsinger). She later succeeded in deposing Lilandra with the aid of the Brood, and took the throne for herself.[6] As ruler of the Shi'ar Empire, she contended with the Starjammers and Excalibur, and sought to capture Phoenix, but was nearly killed by Lilandra in combat.[7]

Some time later War Skrulls impersonating Charles Xavier & the Starjammers aided Lilandra in deposing Deathbird and restoring Lilandra to the throne. With Lila Cheney's help, she and the X-Men defeated the War Skrulls, and Deathbird ceded the empire back to Lilandra as she had grown bored of the bureaucracy.[8]

Deathbird later came to her sister's aid during the short Kree-Shi'ar War. She assassinated Kree leaders Ael-Dann and Dar-Benn.[9] She was captured by Hawkeye, in his guise as Goliath.[10] She was later released and granted dominion over the conquered Kree Empire as viceroy. She was also made praetor (leader) of the Kree Starforce by Lilandra.[11] She led the Starforce in a confrontation with Quasar.[12]

The Kree seem to have since become independent once more.

When the Shi'ar asked for the X-Men’s help against the invading Phalanx, who had already reached their throne-world Chandilar, the X-Men allied themselves with Deathbird. They managed to fend off a Phalanx assault on the Shi'ar Empire, and during the conflict, Deathbird and the X-Man Bishop forged a warrior's respect for each other. Deathbird was amazed that the Earth mutant showed no fear and stood up to her, and they also seemed physically attracted to each other.[volume & issue needed]

As a gesture of honor, Deathbird escorted the mutants back to Earth but their ship was inexplicably destroyed in transit. Deathbird escaped annihilation, with the injured Bishop, using a private ship. She initially convinced Bishop that he was paralyzed due to his injuries and that, of all the X-Men, only he survived. However, not before long, Bishop realized that he was not injured but that Deathbird was using the lab equipment to hold him in stasis. The craft was soon attacked, and Bishop convinced her to release him so that they could deal with the matter together. Eventually, they bonded and soon became romantically involved.[volume & issue needed]

During their journeys, the two were accidentally transported to an alternate future Earth that was ruled by an evil daughter of Shi'ar Empress Lilandra and Charles Xavier. Bishop and Deathbird helped the rebels to oppose her and Deathbird defeated her niece in a duel. She could have slain her, and every instinct told her to do so, but she let her live. Bishop's influence was showing its effects. The heroes of the liberated Earth helped Bishop and Deathbird to return to their own time and they continued their quest to get home.[volume & issue needed] 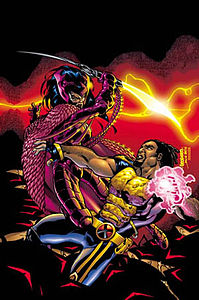 Eventually, Bishop and Deathbird returned to the Sol System and encountered the inert planetary mass of the Living Monolith on their way to Terra Firma. Curious, the two landed their craft and investigated the man-shaped planet. Suddenly Deathbird betrayed Bishop to a cadre of Skrulls and he was returned to Earth in order to implement the ultimate plans of the Skrulls' ally, Apocalypse. Deathbird was herself betrayed and transformed by Apocalypse into one of his Horsemen. With the title of War, Deathbird helped Apocalypse assemble the X-Men he referred to as "the Twelve." Apocalypse was defeated, however, and Deathbird and the Horsemen scattered.

Deathbird and Bishop later ran into each other during the Maximum Security event. Earth had been made a prison planet, with an energy barrier around the solar system, and Deathbird had the key to unlocking it. Bishop confronted her, and the two fought. Deathbird then dared Bishop to kill her, before opening an airlock and getting sucked out into space. Bishop was able to close the airlock, and then admitted to himself that he hated her.

Deathbird was rescued by the Imperial Guard; Lilandra imprisoned her because she posed a threat to her rule.

Vulcan is captured by the palace guard as he enters Shi'ar territory on his quest for vengeance against the entire Shi'ar race. He is incarcerated in the same maximum security installation that houses Deathbird. Vulcan is released by a member of a secret order that wishes D'Ken to lead the Shi'ar once more; Vulcan releases Deathbird.

Vulcan is enthralled by Deathbird, and they become romantically involved. He promises to put his quest for vengeance on hold. Deathbird convinces Vulcan to finish the healing process that the Shi'ar members of the secret order had begun on D'Ken, who remained in a coma since the M'Kraan Crystal incident. When D'Ken discerns Vulcan's feelings for Deathbird, he invokes an ancient Shi'ar custom and invites Vulcan to marry Deathbird and become part of Shi'ar royalty.[13]

Vulcan and Deathbird are married in front of the M'Kraan Crystal just as the X-Men, Lilandra, The Starjammers, and the Shi'ar loyal to Lilandra attack. During the chaos that ensues Vulcan kills D'Ken (never having promised not to kill him) and assumes the throne of Emperor of the Shi'ar Empire, with Deathbird as his Empress. During the fight Polaris crushes the ribs of Deathbird's husband and she instructs the Imperial Guard, still loyal to the ruling family, to protect them as they flee.

Deathbird is a genetic mutant of the Shi'ar species; she has superhuman strength, speed, stamina, agility, flexibility, reflexes, coordination, balance, and endurance well beyond the average limits of her race. She shares the same avian-like physiology typical of her race, such as having hollow bones, but in her case the avian characteristics are more pronounced. This is because she is a "genetic throwback," meaning that she resembles the more primitive Shi'ar who were Birds of Prey. She has inherited atavistic characteristics, such as fully functioning wings, which most Shi'ar lack and is capable of self-propelled flight at a natural winged flight limit velocity.

Deathbird's fingernails are essentially talons which can score steel and tear through substances such as bone and tissue easily.

Aside from her natural physical advantages, Deathbird is a formidably trained warrior of great skill and cunning, having trained the likes of Gladiator. She is also skilled at hurling javelins. She uses a variety of javelins, some of which are designed for specific offensive effects. She carries the javelins as eight-inch (203 mm) quills on twin wrist-bands; when removed from its sheath, a quill will telescope to about four times its original length. Her standard javelin can be used as a spear-like projectile to wound or kill her foes. She has also used a javelin that emits noxious, acrid fumes upon impact. Some of Deathbird's javelins are so designed that when their tips touch they emit a powerful, repeating 35,000 volt electrical charge.

Deathbird has also used other equipment of Shi'ar design, including battle armor, and a large, advanced, one-woman energy cannon.

Deathbird defies the will of her sister and leads a Shi'ar force into the Star Trek reality. There, she attempts to partner with the reality-controlling Gary Mitchell.