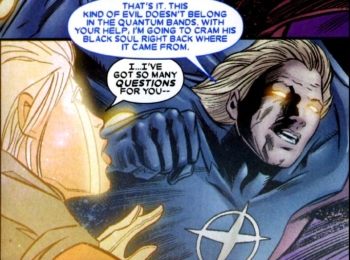 Quasar is the name of several al es in the universe.

Neutron, an alien member of the Empire's Imperial Guard briefly used the name Quasar. He fought Quasar in Quasar vol.1 #33 (1992) and again in #45 alongside Sergi Krylov. Both Krylov and Neutron had been trapped by Quasar in a realm of potential energy called the Quantum Zone, and both were seeking revenge. Quasar eventually tricked Sergi into abandoning the fight and Neutron was picked up by his team, the Imperial Guard, abandoning Quasar.

Wendell Vaughn is one of Marvel's cosmic heroes, a character whose adventures frequently take him into outer space or other dimensions. However, Quasar deviates from the archetype of the noble, dauntless alien set by such Silver Age cosmic heroes as the , and Captain Mar-Vell in that he is an . He starred in an eponymous monthly ongoing series written by that ran for sixty issues beginning in 1989 and has served as a member of The Avengers. He was the Protector of the Universe and fought many foes, including Magus, Oblivion, Her, and Maelstrom, before apparently perishing at the hands of , who drains the energy from the Quantum Bands. His spirit was later revealed to be holding the spirit of Annihilus in check.

Recently, during the Secret Invasion crossover, it was revealed that scientists had found some "exotic radiation" in the and extracted it. Bringing it to Project: Pegasus, they 'awakened' it with Nova's help. It exploded from the 'Quantum Flask' which held it and began speaking to Nova, calling him Richard. Nova mistook the voice for the Xandarian Worldmind at first, but then the voice was revealed as belonging to a resurrected Wendell Vaughn.

After Annihilus' defeat, the Quantum Bands came into the possession of , who commented that when given the option, the bands "chose" a good host rather than an evil one.

Quasar's powers are derived from the pair of Quantum-Bands fused to his wrists (or more specifically, from the seven gems on each of the Bands). They are linked to their wearer's nervous system and grant tremendous powers of energy manipulation. The wrist-bands were originally discovered by the Uranian Eternals in a weapons depot left by the alien .

Foremost amongst these powers is the ability to tap into a limitless energy source called the Quantum Zone. Quasar can project energy in the form of devastating beams of force or heat, but Vaughn more commonly employed them to fashion incredibly durable constructs of solid energy, such as containment spheres or pincers. He protected himself with a personal force field of quantum energy.

Vaughn learned that the Quantum-Bands can also exert control over many other types of energy that are part of the . For example, he once tapped into a sun and caused it to emit an enormous solar flare. He could also absorb and redirect the cosmic energy wielded by such powerful beings as the , , , , Phoenix and the Watchers, siphoning their power and using it to augment his quantum energy. Forms of energy the Quantum-Bands cannot control include magic and the .

Although he could not overtly affect energy, Vaughn had programmed his bands to render him impervious to psionic mental control. Even such powerful psionicists as and the Overmind proved unable to overcome this defense. He does not appear to be protected from magical forms of compulsion.

Vaughn could create apertures into and out of the Quantum Zone, thus allowing passage through its infinite, featureless expanse. He mainly used this ability to traverse interstellar distances in a manner similar to hyperspace travel. The effect is essentially a form of teleportation, which Quasar referred to as a Quantum Jump. A Quantum Jump has a destructive side effect on the local environment, violently upheaving gravity and tearing holes in the atmosphere (on Earth, it would damage the ), so Quasar initially refrained from using it except when in space or in dire circumstances. However, he eventually discovered that he could prevent this effect by surrounding himself with a barrier of solid energy before jumping. Quasar could also shunt other matter into the Quantum Zone provided that he's in physical contact with it.

The Quantum-Bands enable their wearer to fly by manipulating . The maximum flight speed Vaughn could attain is unknown, but he made a trip from Earth to in approximately four years flying non-stop (this was before he learned how to quantum jump). That would require a constant speed of roughly 50,000 miles per hour. This doesn't take into account the velocity he can achieve in a short burst of acceleration.

The Quantum-Band gems possess some capability for analyzing and processing information as if they were extremely advanced computers. This allowed Vaughn to navigate the Quantum Zone and the depths of space. The gems are able to detect, analyze, and track energy emissions across vast distances. They can also "program" his Quantum energy to register and react to certain preset conditions. For instance, at one time Quasar had the Earth surrounded with an invisible lattice-work of energy that was designed to act as a global alert system against potential extraterrestrial threats. The energy field could detect any surges of exotic energy emanating from the planet's surface as well as if any object larger than a passed through it; in either case, the field would react by transmitting an alert signal to the Quantum-Bands.

Vaughn had a direct link to Epoch through his bands, which gave him ready access to her nascent omniscience.

killed Quasar and gained the Quantum-Bands, adding to his already considerable power ["Annihilation: Nova" #4 (Sept.2006)] ,though the bands subsequently came into the possession of Phyla Vell following Annihilus' apparent death. She has since discovered that the Bands contain a finite amount of energy which will drain away if they are isolated from their power source (as yet unexplained) and that they also remain linked in some way to their former users. Quasar has since been sighted as a "spirit", and it has been indicated that his link to the bands enabled him to "pull himself together again" following his physical death.

While he possessed the power of the , Quasar gained the abilities of flight, superhuman strength and resilience. He also was able to regenerate his entire body from minute remains and did not need to eat, drink or breathe. However, virtually all of the energy derived from the Star Brand was depleted not long after he gave it away. The later stated that Quasar's body retains only an insignificant trace amount of energy.

Quasar also briefly possessed the same powers of cosmic awareness that Eon granted to Kree soldier Mar-Vell (later known as the original Captain Marvel). By simply concentrating for a moment, he could gain complete knowledge about virtually anything in the universe. It's unclear why Eon didn't bestow cosmic awareness on Quasar permanently, but being nigh-omniscient himself, he likely determined that it would have been detrimental to Quasar's psyche (as it was to that of ). The fact that he received the awareness while his mind was inhabiting an energy construct, and he did not demonstrate it upon returning to his body, may also have something to do with it.

After a failed war with the Elder God Set and the deaths of every hero on Earth save The Silver Surfer, Quasar was merged with Captain Universe to form a super-being that was capable of capturing and defeating Set. Using the Eye of Agamotto Quasar trapped himself and Set within its pocket dimension. ["What If" vol. 2 #25]

Once, during a trip through alternate realities, the Earth-616 version of Quasar viewed his Captain Universe-enhanced counterpart and Set battling each other. ["Quasar" #30]

Guardians of the Galaxy

Tricked by Eon's evil 'child' Era, Quasar jumps to a sentient nexus of energy and is killed. He ends up in the 'White Room', where all Quantum-Band wielders go after death. Eon is entrapped with him, in the form of a centerpiece on the Room's table.

Her, now called Kismet, teams up with the long-lost son she had with Quasar, Starhawk. They visit Quasar's grave and learn what Era has done. With the aid of the Hawk-God Starhawk worships, the two vow to stop Era.

Wendell Vaughn briefly appeared for one panel as a scientist during the alternate time line of caused by Wanda Maximoff. There is no indication that he possesses the Quantum-Bands in this universe. ["House of M"]

Quasar is briefly mentioned in "Last Avengers Story" #1 as having been driven insane, but he does not appear.

Although Quasar has not appeared as a superhero in the setting, S.H.I.E.L.D agent Wendell Vaughn is the head of security for the top secret in Devil's Point, Wyoming. He first appears in "" #1, when Project Pegasus is attacked by the Serpent Squad.