Each county still operates its own control room, in Devon at Service Headquarters, Exeter and in Somerset at Hestercombe House, Taunton. As part of the FiReControl project, Devon and Somerset Fire and Rescue's control rooms were planned to switch regional control centre in Taunton. Devon's was originally scheduled to take place in January 2010 and Somerset's was scheduled for October 2009, but the plan was scrapped entirely in December 2010.[3]

Devon and Somerset Fire and Rescue Service operates 85 fire stations, of which 14 are crewed day and night (wholetime), one day crewed (Monday to Friday, 09:00 to 18:00), two volunteer, one special operations station and the remainder are crewed by retained firefighters who live near to their fire station and can arrive there within five minutes of a call being received.[4] The breakdown of stations is as follows:

All of the above are in the Plymouth area.

Cheddar and Dulverton each operate a Pinzgauer which is a specially built 6x6 vehicle. They are located to tackle tough terrains in their respective locations. The Supacat at Porlock is a high mobility fire fighting appliance. It is transported on a trailer to incidents that are difficult to access.

Devon and Somerset Fire and Rescue Service works in partnership with South Western Ambulance Service to provide emergency medical cover to areas of Devon and Somerset. These are areas that have been identified as having a greater need for ambulance cover. The aim of a co-responder team is to preserve life until the arrival of either a Rapid Response Vehicle (RRV) or an ambulance. Co-responder vehicles are equipped with oxygen and automatic external defibrillation (AED) equipment.[5]

In addition, the following five Somerset fire stations have been set up as co-responders:

The M5 motorway is the arterial route through Devon and Somerset. It is the main link to the south west from London, Bristol and the North. Devon and Somerset Fire and Rescue Service divide the M5 in to sections so that the nearest appliances attend. The station grounds are:

HMNB Devonport Dockyard, in Plymouth, is home to twenty one of the Royal Navy's fleet of ships and submarines.

The dockyard falls into the station ground of 48 Camels Head, and is backed up by 49 Crownhill. Each part of the dockyard is divided in to risk areas - this then reflects in the level of attendance by the Fire Service.

Some parts of the dockyard are considered a very high risk - therefore attract a high attendance - sometimes as many as four pumping appliances and the aerial ladder platform are mobilised to a fire alarm actuating; in contrast to one pumping appliance to a town dwelling.

Devon and Somerset use a variety of front-line and special appliances.[6] 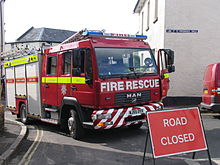 A water tender ladder's major capabilities include pumping up to 3,000 litres (660 gallons) per minute between two locations. It has a storage capacity of 1,800 litres (396 gallons). The pump carries a range of ladders up to 13.5 metres (44 ft). Inside the cab are four sets of compressed air breathing apparatus. Each pump has several lockers on the external of the pump. Inside there is a set of powered hydraulic rescue equipment, a thermal imaging camera, water rescue equipment, a positive pressure fans and safety at height equipment. There are occasions when a Water Tender, and not the Water Tender Ladder, would be mobilised first. To keep the Water Tender Ladder 'on the run' and available; the Water Tender may attend incidents where a house is flooded or where someone has locked themselves out. The Water Tender Ladder carries the call sign V station number P1 or P3 e.g. V17P1. 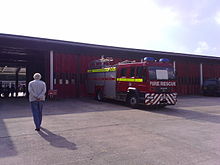 These appliances are broadly similar to the water tender ladders, but carry a different range of equipment, with ladders up to 10.5 metres (34 ft). They are not the primary responder to a road traffic collision - despite carrying hydaulic cutting equipment, the equipment is not as robust or effective as of that carried on a Water Tender Ladder. The water tenders are used to support water tender ladders at property fires and to attend miscellaneous calls. A water tender, like its counterpart, is capable of carrying up to six fire fighters. The Water Tender carries the call sign V station number P2 e.g. V17P2. 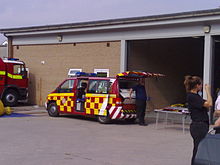 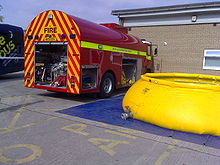 The FRS use a number of water carriers, which enable large quantities of water to be transported to support fires in rural areas or where additional water is required. Each carrier holds 9,000 litres of water. A number of them also carry 1,000 litres (220 gallons) of firefighting foam. The Water Foam Carriers carries the call sign V station number W3 e.g. V17W3.

The FRS has three Hose Laying Vehicles which are used to enable the pumping of water from a water source to support a large incident. Each hose layer carries almost 1.5 kilometres (0.9 mi) of hose.The Hose Layers carries the call sign V station number W1 or 2 e.g. V57W1.

The Multi Role Vehicle (MRV) is primarily used as a foam unit that is used to support firefighting operations involving petrol, fuels and other hydrocarbons. There are a number of hydrocarbon installations in the region and considerable amounts are transported through the region by road and rail. These units also support aircraft incidents both on airfield sites and in remote locations.

Aerial Ladder Platforms, also known as Brontos, are located at strategic locations across the FRS. They all have a working height of 30 metres (98 ft) and are used both to carry out rescues from height, and also as firefighting platforms. They are also used to give firefighters safe access into fires. Occasionally they are also used to monitor a fire from above, or provide lighting. The Aerial Ladder Platforms carries the call sign V station number A1 e.g. V17A1

The Fireboat "Vigiles" is located in Plymouth and is used to protect the Royal Naval Dockyard, the oil storage facilities and the commercial shipping that uses the port. Its high speed enables it to carry out a rescue role.

Due to the rural nature of Devon and Somerset, a number of vehicles are used that are capable of reaching fires that occur on the commons, moors and heathlands of the region. These all carry specialised firefighting equipment designed for the purpose. The Off Road Appliances carries the call sign V station number P1 e.g. V56P1.

Specially trained crews use these vehicles to carry out rescues on the cliffs and quarry faces across the region. The Lines Rescue Units carries the call sign V station number R5 e.g. V48R5.

These vehicles, commonly known as Rangers, are used to support operations by providing logistics and access in difficult terrain. In some cases they may be fitted with special firefighting units to support heath and moorland fires. The Rangers carries the call sign V station number M5 e.g. V20M5.

Co-responder stations have got a dedicated vehicle for Co-responder calls so the fire appliance to remain available. The vehicles are equipped with oxygen and automated external defibrillator (AED) equipment. The Emergency Response Unit carries the call sign V station number V1 e.g. V38V1. 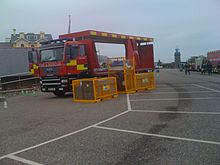 The fire and rescue service operates four Incident Response Units (IRUs). They are stationed at Chelston Business Park, near Wellington and Taunton fire station in Somerset and Okehampton and Bovey Tracey Fire Stations in Devon. They are supplied by the Department for Communities and Local Government, to respond to an incident involving mass decontamination - defined as incidents where more than one person can be decontaminated simultaneously using the same equipment. Each IRU is maintained by a host station with assistance from support stations which all receive training on the equipment at regular periods throughout the year. The Incident Response Units carries the call sign V station number H9 e.g. V20H9. See External links for more information on the IRU.

The FRS has an Urban search and rescue team (USAR), one of 21 teams strategically located around England and Wales. They are equipped with five modules carrying varying equipment to deal with a large range of incidents including structural collapse, large transport incidents, open area searches, heavy lifting operations, shoring and many more. The Urban Search and Rescue is station 60 and based at the service's main headquarters, in Exeter.

The British Red Cross fire and emergency support service helps to meet the needs of individuals who have suffered damage to their homes following a domestic property fire, flood or similar emergency. Two units operating in Devon and Somerset based at the based Plymouth Red Cross Centre and Bridgwater Fire Station[7] are dedicated volunteers. What they do includes: Refreshments, Clothing, Toiletries, Use of an onboard telephone, First aid, Sign posting to other organisations, Support with the care of children and pets, Assistance in securing temporary accommodation, Transport to friends/family and Use of shower/washing and toilet facilities.

As part of the FiReControl project, Devon and Somerset Fire and Rescue's control rooms were due switch over to the regional control centre in Taunton. Both control rooms were planned to cutover in May 2011,[8] but the plan was formally scrapped in December 2010.[3]

The Fire and Rescue Services Act 2004, gives fire services the power to assist other fire services or fire authorities in what is known as mutual assistance.[9]

The fire services that adjoin the Devon and Somerset Fire and Rescue Service are as follows:

On 6 October 2004, the large Trago Mills shopping centre near Newton Abbot was involved in a major fire,[10] which eventually went to a 25 pump attendance. This was the largest fire in Devon for many years. Due to the efforts of attending crews much of the site was saved and was partially reopened for business just over a week later. At the fires height press reports indicate 15 main jets in use along with three ALP monitors.

In March 2010, firefighter Julian Lawford was charged with manslaughter following the death of a man from Burtle in August 2009.[11] The blue lights and sirens on Lawford's fire engine, which was travelling to a road traffic accident, spooked a heard of cows which trampled the 75 year-old herdsman.[12] In December 2010, Lawford pleaded not guilty to manslaughter and causing death by dangerous driving, but the prosecution accepted his plea of guilty to the lesser charge of causing death by careless or inconsiderate driving.[13]

Devon and Somerset Fire and Rescue Service has a number of schemes for young people.[14]

They operate Four fire cadet units at Taunton, Frome, Newton Abbot and Torquay fire stations, for boys and girls aged 11 to 17 the opportunity to work with Fire and Rescue Service equipment and learn to work together as a team.

Firesetter Intervention programme is designed to address firesetting behaviour amongst children and young people up to the age of 19 years.

Phoenix is a six month programme, primarily designed to reduce fire risk and fire related crime within local communities by working with 'at-risk' young people between the ages of 15–18 years.