Mother Courage and Her Children

Mother Courage and Her Children 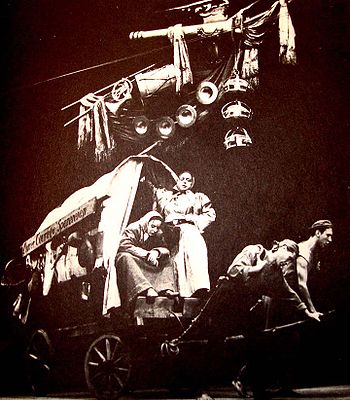 Mother Courage and Her Children, with Therese Giehse in the title role, with Erni Wilhemi, Hans Christian Blech, and Karl Lieffen, at the Munich Kammerspiele, directed by Bertolt Brecht, Munich, 1950. Photo shows the famous cart Mother Courage pulls through the Thirty Years' War, here on a revolving stage, designed by Theo Otto.[1]

Mother Courage and Her Children (German: Mutter Courage und ihre Kinder) is a play written in 1939 by the German dramatist and poet Bertolt Brecht (1898–1956) with significant contributions from Margarete Steffin.[2] After four very important theatrical productions in Switzerland and Germany from 1941 to 1952—the last three supervised and/or directed by Brecht—the play was filmed several years after Brecht's death in 1959/1960 with Brecht's widow and leading actress, Helene Weigel.[3]

Mother Courage is considered by some to be the greatest play of the 20th century, and perhaps also the greatest anti-war play of all time.[4]

Mother Courage is one of nine plays that Brecht wrote in an attempt to counter the rise of Fascism and Nazism. Written largely in response to the invasion of Poland (1939) by the German armies of Adolf Hitler, Brecht wrote Mother Courage in what writers call a "white heat"—in a little over a month.[5] As leading Brecht scholars Ralph Manheim and John Willett wrote:

Mother Courage, with its theme of the devastating effects of a European war and the blindness of anyone hoping to profit by it, is said to have been written in a month; judging by the almost complete absence of drafts or any other evidence of preliminary studies, it must have been an exceptionally direct piece of inspiration.[6]

Following Brecht's own principles for political drama, the play is not set in modern times but during the Thirty Years' War of 1618–1648. It follows the fortunes of Anna Fierling, nicknamed "Mother Courage", a wily canteen woman with the Swedish Army who is determined to make her living from the war. Over the course of the play, she loses all three of her children, Swiss Cheese, Eilif, and Kattrin, to the same war from which she sought to profit.

The name of the central character, Mother Courage, is drawn from the picaresque writings of the 17th-century German writer, Grimmelshausen, whose central character in the early short novel, The Runagate Courage,[8] also struggles and connives her way through the Thirty Years' War in Germany and Poland, but otherwise the story is mostly Brecht's, in collaboration with Steffin.

The action of the play takes place over the course of 12 years (1624 to 1636), represented in 12 scenes. Some give a sense of Courage's career without being given enough time to develop sentimental feelings and empathize with any of the characters. Meanwhile, Mother Courage is not depicted as a noble character – here the Brechtian epic theatre sets itself apart from the ancient Greek tragedies in which the heroes are far above the average. With the same alienating effect, the ending of Brecht's play does not arouse our desire to imitate the main character, Mother Courage.

Mother Courage is among Brecht's most famous plays, and has been considered by some to be the greatest play of the 20th century.[9] His work attempts to show the dreadfulness of war and the idea that virtues are not rewarded in corrupt times. He used an epic structure so that the audience focuses on the issues being displayed rather than getting involved with the characters and emotions. Epic plays are of a very distinct genre and are typical of Brecht; a strong case could be made that he invented the form.[10]

Mother Courage is an example of Brecht's concepts of Epic Theatre and Verfremdungseffekt or "estrangement effect". Verfremdungseffekt is achieved through the use of placards which reveal the events of each scene, juxtaposition, actors changing characters and costume on stage, the use of narration, simple props and scenery. For instance, a single tree would be used to convey a whole forest, and the stage is usually flooded with bright white light whether it's a winter's night or a summer's day. Several songs, interspersed throughout the play, are used to underscore the themes of the play, while making the audience think about what the playwright is saying.

The play is set in the 17th century in Europe during the Thirty Years' War. The Recruiting Officer and Sergeant are introduced, both complaining about the difficulty of recruiting soldiers to the war. A canteen woman named Mother Courage enters pulling a cart that she uses to trade with soldiers and make profits from the war. She has three children, Eilif, Kattrin, and Swiss Cheese. The sergeant negotiates a deal with Mother Courage while Eilif is led off by the recruiting officer. One of her children is now gone.

Two years from then, Mother Courage argues with a Protestant General's cook over a capon, or chicken. At the same time, Eilif is congratulated by the General for killing peasants and slaughtering their cattle. Eilif and his mother sing "The Song of the Girl and the Soldier". Mother Courage scolds her son for taking risks that could have got him killed and slaps him across the face.

Later, Mother Courage waits outside of the General's tent in order to register a complaint and sings the "Song of Great Capitulation" to a young soldier waiting for the General as well. The soldier is angry that he has not been paid and also wishes to complain. The song persuades the soldier that complaining would be unwise, and Mother Courage (reaching the same conclusion) decides she also does not want to complain.

When Catholic General Tilly's funeral approaches, Mother Courage discusses with the Chaplain about whether the war will continue. The Chaplain then suggests to Mother Courage that she marry him, but she rejects his proposal. Mother Courage curses the war because she finds Kattrin disfigured after collecting more merchandise.

At some point about here Mother Courage is again following the Protestant army.

Two peasants wake Mother Courage up and try to sell merchandise to her while they find out that peace has broken out. The Cook appears and creates an argument between Mother Courage and the Chaplain. Mother Courage departs for the town while Eilif enters, dragged in by soldiers. Eilif is executed for killing peasants but his mother never finds out. When the war begins again, the Cook and Mother Courage start their own business.

The seventeenth year of the war marks a point where there is no food and no supplies. The Cook inherits an inn in Utrecht and suggests to Mother Courage that she operate it with him, but he refuses to harbour Kattrin. It is a very small inn. Mother Courage will not leave her daughter and they part ways with the Cook. Mother Courage and Kattrin pull the wagon by themselves.

The Catholic army attacks the small Protestant town of Halle while Mother Courage is away from town, trading. Kattrin is woken up by a search party that is taking peasants as guides. Kattrin fetches a drum from the cart, climbs onto the roof, and beats it in an attempt to awake the townspeople. Though the soldiers shoot Kattrin, she succeeds in waking up the town.

Early in the morning, Mother Courage sings to her daughter's corpse, has the peasants bury her and hitches herself to the cart. The cart rolls lighter now because there are no more children and very little merchandise left.

The play was originally produced at the Schauspielhaus Zürich, produced by Leopold Lindtberg in 1941. Music was written by Paul Dessau. The musicians were placed in view of the audience so that they could be seen, one of Brecht's many techniques in Epic Theatre. Therese Giehse, (a well-known actress at the time) took the title role.

The second production of Mother Courage took place in then East Berlin in 1949, with Brecht's (second) wife Helene Weigel, his main actress and later also director, as Mother Courage. This production would highly influence the formation of Brecht's company, the Berliner Ensemble, which would provide him a venue to direct many of his plays. Brecht died directing Galileo for the Ensemble. Brecht revised the play for this production in reaction to the reviews of the Zürich production, which empathized with the "heart-rending vitality of all maternal creatures." Even so, he wrote that the Berlin audience failed to see Mother Courage's crimes and participation in the war and focused on her suffering instead.[11]

The next production (and second production in Germany), was directed by Brecht at the Munich Kammerspiele in 1950, with the original Mother Courage, Therese Giehse, with a set designed by Theo Otto (see photo, above.)

In Spanish, it was premiered in 1954 in Buenos Aires with Alejandra Boero and in 1958 in Montevideo with China Zorrilla.[importance?]

In 1955, Joan Littlewood's Theatre Workshop gave the play its London première, with Littlewood performing the title role. In 1995/6, Diana Rigg was awarded an Evening Standard Theatre Award for her performance as Mother Courage, directed by Jonathan Kent, at the Royal National Theatre.

From August to September 2006, Mother Courage and Her Children was produced by The Public Theatre in New York City with a new translation by playwright Tony Kushner. This production included new music by composer Jeanine Tesori and was directed by George C. Wolfe. Meryl Streep played Mother Courage with a supporting cast that included Kevin Kline and Austin Pendleton. This production was free to the public and played to full houses at the Public Theatre's Delacorte Theater in Central Park. It ran for four weeks.

This same Tony Kushner translation was performed in a new production at London's Royal National Theatre between September and December 2009, with Fiona Shaw in the title role, directed by Deborah Warner and with new songs performed live by Duke Special.

IN 1971 Joachim Tenschert directed a staging of Bertolt Brecht's original Berliner Ensemble production for the Melbourne Theatre Company.[12] Hugh Colman supervised the original costume designs. The rigidity of Tenschert's direction caused some tenion in the rehearsal room; however, it was a first-rate production by the time it opened at the Princess Theatre. Gloria Dawn played Mother Courage; Wendy Hughes, John Wood and Tony Llellwyn-Jones her children; Frank Thring the Chaplain; Frederick Parslow the cook; Jennifer Hagan played Yvette. Roland Rocchiccioli was the stage manager and musical director for the Paul Dessau score.

In the Tony Award-winning musical Urinetown, the character of Penelope Pennywise is roughly based on Mother Courage.

The rock band My Chemical Romance created the character Mother War for their third album The Black Parade. Mother War's song, "Mama", is influenced by themes from Mother Courage and Her Children, including the effect of war on personal morals.