The Good Person of Szechwan

The Good Person of Szechwan

The Good Person of Szechwan (German: Der gute Mensch von Sezuan, first translated less literally as The Good Woman of Szechwan)[1] is a play written by the German theatre practitioner Bertolt Brecht, in collaboration with Margarete Steffin and Ruth Berlau.[2] The play was begun in 1938 but not completed until 1943, while the author was in exile in the United States. It was first performed in 1943 at the Zürich Schauspielhaus in Switzerland, with a musical score and songs by Swiss composer Huldreich Georg Früh.[3] Today, Paul Dessau's composition of the songs from 1947–48, also authorized by Brecht, is the better known version. The play is an example of Brecht's "non-Aristotelian drama", a dramatic form intended to be staged with the methods of epic theatre. The play is a parable set in the Chinese "city of Sichuan".[4]

Originally, Brecht planned to call the play The Product Love (Die Ware Liebe), meaning "love as a commodity". This title was a play on words, since the German term for "true love" (Die wahre Liebe) is pronounced in a similar way.[5]

The play follows a young prostitute, Shen Te, as she struggles to lead a life that is "good" (according to the terms of the morality that is taught by the gods and to which her fellow citizens of 'Szechwan' (Sichuan) pay lip service), without allowing herself to be abused and trod upon by those who would accept and, more often than not, abuse her goodness. Her neighbors and friends prove so brutal in their filling of their bellies that Shen Te is forced to invent an alter ego to protect herself: a male cousin named Shui Ta, who becomes a cold and stern protector of Shen Te's interests. The theme of qualitative "goodness" (which seemed so simple and obvious in the title of the play) is rendered unstable by application to both genders, as Shen Te realizes she must operate under the guise of both in order to live a good life.

Brecht's interest in historical materialism is evident in the play's definition of contemporary morality and altruism in social and economic terms. Shen Te's altruism conflicts with Shui Ta's capitalist ethos of exploitation. The play implies that economic systems determine a society's morality.

The play opens with Wang, a water seller, explaining to the audience that he is on the city outskirts awaiting the foretold appearance of several important gods. Soon the gods arrive and ask Wong to find them shelter for the night. They are tired, having traveled far and wide in search of good people who still live according to the principles that they, the gods, have handed down. Instead they have found only greed, evil, dishonesty, and selfishness. The same turns out to be true in Szechwan: no one will take them in, no one has the time or means to care for others - no one except the poor young prostitute Shen Teh, whose pure inherent charity cannot allow her to turn away anyone in need. Shen Teh was going to see a customer, but decided to help out instead, however confusion follows leaving Wang fleeing from the illustrious Ones, leaving his water carrying-pole behind.

Shen Teh is rewarded for her hospitality, as the gods take it as a sure sign of goodness. They give her money and she buys a humble tobacco shop which they intend as both gift and test: will Shen Teh be able to maintain her goodness with these newfound means, however slight they may be? If she succeeds, the gods' confidence in humanity would be restored. Though at first Shen Teh seems to live up to the gods' expectations, her generosity quickly turns her small shop into a messy, overcrowded poorhouse which attracts crime and police supervision. In a sense, Shen Teh quickly fails the test, as she is forced to introduce the invented cousin Shui Ta as overseer and protector of her interests. Shen Teh dons a costume of male clothing, a mask, and a forceful voice to take on the role of Shui Ta. Shui Ta arrives at the shop, coldly explains that his cousin has gone out of town on a short trip, curtly turns out the hangers-on, and quickly restores order to the shop.

At first, Shui Ta only appears when Shen Teh is in a particularly desperate situation, but as the action of the play develops, Shen Teh becomes unable to keep up with the demands made on her and is overwhelmed by the promises she makes to others. Therefore she is compelled to call on her cousin's services for longer periods until at last her true persona seems to be consumed by her cousin's severity. Where Shen Teh is soft, compassionate, and vulnerable, Shui Ta is unemotional and pragmatic, even vicious; it seems that only Shui Ta is made to survive in the world in which they live. In what seems no time at all, he has built her humble shop into a full-scale tobacco factory with many employees.

Shen Teh also meets an unemployed male pilot, Yang Sun, whom she quickly falls in love with after preventing him from hanging himself. However, Yang Sun doesn't return Shen Teh's feelings but simply uses her for money and Shen Teh quickly falls pregnant with his child.

Eventually one of the employees hears Shen Teh crying, but when he enters only Shui Ta is present. The employee demands to know what he has done with Shen Teh, and when he cannot prove where she is, he is taken to court on the charge of having hidden or possibly murdered his cousin. The townspeople also discover a bundle of Shen Teh's clothing under Shui Ta's desk, which makes them even more suspicious. During the process of her trial, the gods appear in the robes of the judges, and Shui Ta says that he will make a confession if the room is cleared except for the judges. When the townspeople have gone, Shui Ta reveals herself to the gods, who are confronted by the dilemma that their seemingly arbitrary divine behavior has caused: they have created impossible circumstances for those who wish to live "good" lives, yet they refuse to intervene directly to protect their followers from the vulnerability that this "goodness" engenders.

At the end, following a hasty and ironic[clarification needed] (though quite literal) deus ex machina, the narrator throws the responsibility of finding a solution to the play's problem onto the shoulders of the audience. It is for the spectator to figure out how a good person can possibly come to a good end in a world that, in essence, is not good. The play relies on the dialectical possibilities of this problem, and on the assumption that the spectator will be moved to see that the current structure of society must be changed in order to resolve the problem. 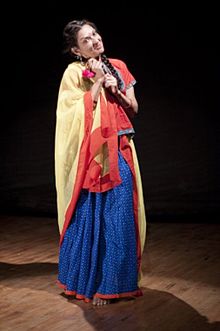 David Harrower created a new translation entitled The Good Soul of Szechuan, which opened at the Young Vic theatre from 8 May to 28 June 2008 with Jane Horrocks as Shen Te/Shui Ta and a score and songs by David Sawer. This retained several features of the 1943 version, including the themes of heroin and drug-dealing. Indian theatre director Arvind Gaur directed Indian adaptation of this play by Amitabha Srivastava (National School of Drama) in 1996 with Deepak Dobriyal, Manu Rishi and Aparna Singh as lead actors.In Dec 2009 Arvind Gaur re-interpreate this play with well-known activist and performer Mallika Sarabhai as Shen Te/Shui Ta.[6]

Composer/lyricist Michael Rice created a full-length musical version with Eric Bentley which premiered in 1985 at the Arkansas Repertory Theatre, directed by Cliff Baker. This version is now licensed through Samuel French.