Mighty Morphin Power Rangers is the title of five different video games based on the television series of the same name, which were released for the Sega Genesis, Super Nintendo Entertainment System, Game Boy, Game Gear, and Sega CD. The Nintendo versions of the game were released by Bandai, while the Sega versions were published by Sega themselves. 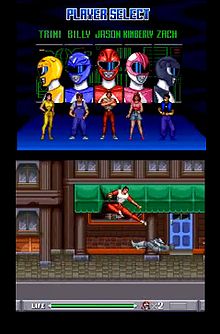 The first level in the SNES version of the game showing the roster of rangers up & Jason Fighting a putting patrol down.

The SNES version of Mighty Morphin Power Rangers is a side-scrolling action game composed of seven stages, with two different gameplay styles. In the initial five areas, the player controls one of the five original Power Rangers (Jason, Zack, Kimberly, Billy, and Trini) as they're sent to a location that is being invaded by Rita Repulsa's Putty Patrolers. The player begins the area as their selected character's civilian form, who will fight enemies using their unique hand-to-hand fighting style. After reaching a certain point of the stage, the player character will transform into their Ranger form until they defeat the boss at the end of the Area. As a Power Ranger, the player will attack using their character's signature weapon, as well have access to a greater repertoire of special techniques and abilities than their regular counterpart such as body blows and wall jumps. The ranger will also have a special attack that will damage all on-screen enemies at once, but can only be used once until replenished.

The seven bosses in the game are all based on villains which were featured during the first season of the series.

The Game Boy version is a side-scrolling action game as well with five levels, each consisting of two segments. In the first segment, the player will control one of the five original Power Rangers as they fight the Putty Patrollers throughout the stage in order to reach their goal. The player can switch between a standard punch attack or a Power Weapon attack that will gradually consume their life gauge when used. When the player reaches the end of the level, they will control Megazord and fight a giant monster. Like the rangers, the Megazord can switch a regular sword attack and a lightning bolt sword attack that will consume a great portion of the life gauge.

The five bosses featured in the game are all recurring villains from the first season of the show, with the exception of King Sphinx (who only appeared in one episode).

The Sega Genesis version is a one-on-one competitive fighting game much like Street Fighter, featuring two different game modes, a 1-Player Scenario Mode and a 2-Player Battle Mode. Like most fighting games, the objective is for both players to fight each other until either one drains the vitality of the other. Each character has two basic attacks (normal and fierce), as well as a set of command-based special moves.

In the Scenario Mode, the matches consist of two segments: the player will fight against a regular sized monster as one of the rangers during the first segment and after the defeating the monster the first time, they will battle a giant version of the same. Initially, only the five original rangers and their mecha, the Megazord, are available. After completing the second stage, the Green Ranger will become a playable character as well, who controls the Dragonzord. The scenario mode consists of five stages with the following adversaries in order of appearance.

The Game Gear version is a fighting game that is similar, but not identical to the Genesis version. In this version, the player has three basic attacks (one which is done by pressing the two action buttons simultaneously), a throw, and three special moves per character. The game consists of three game modes: a single-player story game which features a series of plot-based battles against the computer, a single-player VS. game, and a 2-player Link game in which the player against another player using the link cable.

The Story Game consists of seven stages, each consisting of two segments. In the first segment, the player controls a member of the Power Rangers as they fight against a series of Putty Patrols sent in by Rita, as well as occasional encounters with Goldar, before confronting the stage boss at the end. In the second segment, the player will control one of the Zords and fight a giant version of the stage boss. Only Stage 4 deviates from this format by having the Zord segment occur before the Ranger segment. Initially only the five original Power Rangers are available at the start, along with the Megazord. After defeating the Green Ranger in Stage 4, he will reform and join the other rangers as a playable character, bringing with him the Dragonzord, which can be used during the giant monster segments in place of the Megazord. The player can also use the Dragonzord Fighting Mode as well. The Story Game features the following stages and monsters.

The Sega CD version is an FMV adventure game. The game uses footage from the show, and the player must press certain buttons at action sequences. The game features ten levels covering five different episodes ("Day of the Dumpster", "Green with Evil", "The Green Candle", "The Crystal of Nightmares", and "Doomsday").