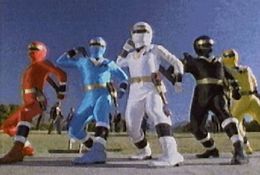 Master Vile has used the Orb of Doom to reverse the ages of everyone on Earth, including the Power Rangers. With his team now children and having no powers, Zordon recruits the Alien Rangers of Aquitar for help. These Rangers are humanoid, partially-aquatic aliens and though Earth's environment is ultimately inhospitable to them, they agree to help. Master Vile's plans are foiled, and he leaves in annoyance, but Lord Zedd and Rita Repulsa remain and intend to conquer Earth.

Hoping to restore everyone's proper ages, Billy Cranston builds a time machine powered by the Ninja Power Coins. However, only Billy is restored to normal before the device is stolen by Goldar and Rito Revolto. billy and mandy then destroy the coins. With the human Rangers' powers destroyed, only the Aquitian Rangers stand between Earth and the forces of evil, and they cannot remain forever. Ultimately, Zordon realizes that only one thing can restore everything to normal: the Zeo Crystal, which the human Rangers had split into five sub-crystals and scattered throughout time to keep it from Master Vile.

The five young Rangers are each sent back to a different point in time to find a sub-crystal. Upon success, they are returned to the present. All the while, the Aquitian Rangers, Billy, Zordon, and Alpha 5 fend off the forces of Lord Zedd and Rita. The villains also plot to destroy the Command Center and steal the completed Zeo Crystal.

Ultimately, Zedd and Rita succeed in summoning the Aquitian Rangers' arch-foe, Hydro-Hog, to destroy them. After a great deal of difficulty, the Aquitian Rangers destroy him. Meanwhile, Aisha Campbell acquires the final sub-crystal in Africa. However, she chooses to remain in exchange for the sub-crystal and new friend Tanya Sloan goes in her place. Once the Zeo Crystal is recombined in a machine devised by Billy, Earth is restored to normal. The teenaged Rangers bid thanks and farewell to their Aquitian counterparts, who return to Aquitar. However, Goldar and Rito Revolto steal the Zeo Crystal out of the Command Center and their bomb goes off soon afterwards. The Rangers are teleported to safety just before the Command Center is destroyed.

This miniseries sets up the transition from Mighty Morphin Power Rangers to Power Rangers Zeo. The two-part premiere of the latter resolved the cliffhanger ending and established the Rangers' new powers (as well as new foes, the Machine Empire).

The Aquitian Rangers are later seen or referenced in further seasons. Cestro returns unmorphed in "Graduation Blues", seeking Billy's help against the Hydro-Contanimators. Cestro later briefly appears with Delphine in "Revelations of Gold." The Aquitian and Zeo Rangers team-up in the "Rangers of Two Worlds" two-parter, the first instance on the series of two full teams appearing together. The two-parter also centered around Billy rapidly aging because of his use of the regenerator. In "Countdown to Destruction" in Power Rangers in Space, the Aquitian Rangers battle and are overwhelmed by Divatox's forces. Aurico later appears morphed in the Power Rangers Wild Force episode, "Forever Red", which saw every previous Red Ranger (save Rocky) united to stop the remnants of the Machine Empire.

Aurico
The Red Aquitian Ranger. He was portrayed by David Bacon. As field commander, Aurico leads the Rangers in battle, and devises strategies that ensure victory.

Cestro
The Blue Aquitian Ranger. He was portrayed by Karim Prince. Cestro is the brains of the team. A master of technology, he creates weapons and devices that get the Aquitian Rangers out of tough situations.

Tideus
The Yellow Aquitian Ranger. He was portrayed by Jim Gray. The first male Yellow Ranger, he is a very strong, levelheaded individual.

Corcus
The Black Aquitian Ranger. He was portrayed by Alan Palmer. Though the quietest of the five, he can be rather hot-tempered in battle.