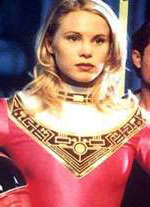 Katherine Hillard (commonly known to her friends as Kat) is a fictional character in the "" franchise. She was played by n-American actress in adult form, and by Julia Jordan in child form. Kat is the second of the third season in the series "", the Pink Zeo Ranger in ', and the first Pink Turbo Ranger in '.

Kat had quite a different personality from that of her predecessor . Kat was generally an introverted, calm young woman whereas Kimberly was far more upbeat, jubilant and outgoing. Kat was rather soft spoken, and rarely openly displayed her emotions as Kimberly had. Kat is the only Ranger who does not have a background in or . However, she has a background in . Though she would later prove herself to be a capable member of the team, her ability to fight just as well as the other, more experienced members of the Power Rangers, was never explained, and she was rarely seen fighting unmorphed until "".

Kat worked extremely well with animals; with Aisha's help, she taught her aunt's chimp, Kelly, sign language ("MMPR"'s "A Chimp in Charge") and trained a dog, Smokey, to help the Junior Police Force (Zeo's "Every Dog Has His Day"). She also proved to be musically talented by helping Aisha write the winning entry in Angel Grove High School's competition to write a school theme song.

Kat was the first Power Ranger not born in but the second Power Ranger portrayed by an actress not born in North America following portrayed by Vietnamese-born actress ; she was actually born in . This would be repeated again in "" with the addition of , the Green Mystic Ranger. Katherine was the only Ranger to wear the same Ranger color for three series in a row.

Kat has the distinction of sharing her first name and her nickname with another Ranger, of "".

A former aspiring champion diver (an ambition she abandoned after a accident), Kat came to Angel Grove, with her family after her father was transferred, from Surrey Hill, as a junior in . had made her an evil spy and gave her dark powers as well as the ability to turn into a cat. She was found by Kimberly and as a and was adopted by them. She spies on the Rangers to gain information on their lives.

Kat stole Kimberly's Ninja Coin which weakened Kimberly. Using the coin, she was able to break into 's Falconzord and capture it, rendering the other Ninjazords useless. Because the coin was in the hands of evil, Kimberly's powers (and even her own life force) were drained.

When Kimberly fell at the Youth Center due to her weakened state, Kat was there, presumably trailing her, and called the hospital to come and pick her up. She felt responsible and guilty, perhaps because she was trying to resist Rita's spell. This ultimately helped break the spell that Rita had over her. Seeking to redeem herself for her past misdeeds under the spell, she turns herself over to Rita and Zedd shortly after this, thinking the s would free Ninjor. Kat manages to trick Rita into falling asleep, and after retrieving the Ninja Coin, is teleported to safety by .

Kat had returned Kimberly's Ninja Coin and became her replacement as Kimberly left for the Pan Global Games. Oddly no elaborate means of transferring the Pink Ranger power was used such as the Sword of Light, which had been used in the middle of season two to transfer the powers of the original Red, Black and Yellow Rangers onto their replacements. Kimberly simply hands her the coin and the energy flows from Kimberly to Kat as she takes the coin. Kat becomes the second Pink Power Ranger and Pink Ninja Ranger. She also controls the Crane Ninjazord and copilots the White Shogunzord with Tommy. In "Rita's Pita," Kat had the ability to pick up Rita's thoughts as a side effect of the spell she was put under, but these abilities soon faded. There was a point where she wanted to date Tommy, but as Kimberly and Tommy were still a couple at the time, Kat hid her feelings for Tommy (and was very jealous of Kimberly while under Rita's spell).

After the time was reversed, Kat was turned into a child, and the Pink Crane Ninja Power Coin was destroyed, Kat's Zeo Quest took her to Australia, presumably the future, where she was tested for goodness of heart by Agatha, whom young Kat initially mistakes for her older self. Katherine obtained her crystal by helping out an old lady in distress (Agatha in disguise) and being rewarded with the Pink Zeo sub-crystal.

Kat became the Pink Zeo Ranger, piloting the Zeozord I and Super Zeozord I. Kat was very friendly in welcoming new Ranger to the team; she helped Tanya register for school and invited the newcomer to live with her family throughout "Zeo".

After Tommy received a letter from Kimberly, Kat tried her best to set Tommy up with another girl, Heather Thompson, but it failed due to Tommy's intervening Ranger duties. Kat and Tommy were eventually dating by the episode "Hawaii Zeo." During the season finale of "Zeo", a themed episode set in the future, Kat and Tommy were shown to have been married for some time with an older grandson who happens to be a Power Ranger. This episode was assumed, though not confirmed, to be set in an alternate universe due to the appearances of and (both destroyed in the "" finale ""), both of whom have otherwise made unexplained returns.

Tommy was later captured by Prince Gasket of the evil Machine Empire and brainwashed into attempting to destroy his friends, believing them to be the threat to the world. The Rangers were successful in restoring Tommy's memories after demorphing to show him the faces of his true friends; this was Kat's idea, and she was the first one to demorph in front of Tommy, eventually embracing him in a hug as he attempted to strike her.

Prince Gasket's wife, Archerina, also exhibited great dislike for Katherine, perhaps originating out of jealousy, that led to a rivalry between the two. In "A Mystery to Me," Gasket and Archerina arranged for the other Rangers to be captured in a secluded room of a mansion during a mock murder mystery so that Archerina could challenge her rival. Katherine accepted to free the others, but was outnumbered until Auric the Conqueror offered his assistance.

Kat gains her Turbo powers when the Rangers' Zeo powers no longer surpass sufficient quality to combat , an evil space pirate bent on destroying the earth by unleashing a great evil. Kat becomes the Pink Turbo Ranger with the powers of the Wind Chaser Turbozord.

After graduating at the top of her class, Kat became student teacher at Angel Grove High in the Blue Turbo Ranger 's class, and discovered that he is a child genius. In "Turbo", she is much powerful than before and proves that she is much more capable than she was initial shown to be in the previous two series (this is proven in the "Weight & See" episode). After being insulted over her weight at a dance recital, Kat develops something of an , and Numbor uses her poor self-esteem (and his own number-altering powers) to make her light as a feather. When Kat realizes that inner beauty is more important, the spell is broken, and she defeats Numbor on her own by giving him several hard beatings while the others are hurt when fighting Numbor (this proves that Kat has truly grown and strengthened in her role as a Ranger, and she even initiated the Turbo Megazord Spinout that destroyed him).

As she tried out in an audition to be accepted into the Royal Dance Academy in London, one of the best dance schools in the world, she met Lt. Stone's stuck-up niece Jenny, who was also a dancer, and auditioned for the spot. The two danced gracefully, but in the end it was Kat who was accepted. Her victory was due to the judges not liking Jenny's attitude, and told her to control her emotions and adjust her attitude. Kat was congratulated by the other Rangers, but could not help but feel a little guilty, as Tanya had passed an opportunity at a singing career to continue with her Ranger duties. She said that singing was something that she could pick up any time, whereas her acceptance into the Dance Academy was a once-in-a-lifetime opportunity.

She gave her powers up to to pursue other things in life. Kat had selected Cassie to become the new Pink Ranger, due to her sense of loyalty and trustworthiness which had led her to come to her defense. Currently, Kat is studying ballet in England.

Though her tenure as a Power Ranger wasn't as long as that of Kimberly, it should be noted that, to her credit, she has been through the most number of Ranger Forms (Pink Power Ranger, Pink Ninja Ranger, Pink Zeo Ranger and Pink Turbo Ranger) of any other female Ranger in Power Rangers' history.