Rita Repulsa is a fictional character from the television series Mighty Morphin Power Rangers. She is based on the Kyōryū Sentai Zyuranger villain Witch Bandora. In 2006, Jetix had a poll asking viewers to vote for the greatest villain in the history of the Power Rangers and Rita Repulsa was voted as number one.[citation needed]

In the 2006 series, Power Rangers: Mystic Force, the audience sees that Rita has become Mystic Mother (played by Machiko Soga, the original Rita actress, for the Japanese series, Magiranger) and she is the empress of all good magic. In episode 31 of Mystic Force, it is referenced that Mystic Mother was once called Rita in "the dark days". 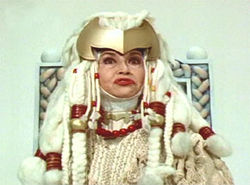 Rita as the Mystic Mother.

An evil alien witch bent on galactic domination, Rita Repulsa was the first villain the Power Rangers had to face. Most discernible by her two pointed hair cones, one may also recognize her by her screeching voice, Madonna-like cone bra, and obnoxious attitude. While she is sadistic and power hungry, her character would usually become humorous whenever the Power Rangers defeated her; this would end with the catchphrase "I've got such a headache!" As Rita then married Lord Zedd later on in the series, her humorous personality was increased (usually arguing with Zedd or her father, Master Vile).

Being a powerful witch, Rita possesses many magical abilities. In the first season, her wand was used as the recurring plot device to make her monsters grow to enormous sizes.

In the 2006 series Power Rangers: Mystic Force she is the ruler of all good magic and can use that magic to defend herself if and when she needs to.

At the beginning of season 1, Rita Repulsa had been imprisoned for over ten thousand years in a space dumpster. She, along with the other season 1 villains, was released by a pair of Earth astronauts. She exited the dumpster along with her minions Goldar, Baboo & Squatt and Finster. Rita claimed she would conquer the first planet she saw after being freed, and it happened to be Earth. Over the course of the show, Rita Repulsa battled the Power Rangers using everything from phobia spells, super Putty patrollers, binding magic spells, and on occasions, she would even allow the likes of Goldar and Squatt and Baboo to be "in charge" of destroying the Power Rangers. Nothing worked, and Rita would normally take her frustrations out on her henchmen by bashing them on the head with her magic wand or screaming into their faces. One of Rita's most memorable traits was that following each loss, she would either swear vengeance, or complain that she had a headache (the latter becoming one of her trademarks). Eventually Rita's reign of terror came to an end when Lord Zedd returned to assume control. Then it is revealed Rita was not the true empress, but actually the regent of Zedd's empire while he was off in other places. Zedd was furious that Rita had failed to defeat "children" and conquer the Earth. Despite Rita's begging and pleading, Lord Zedd vaporized Rita's magic wand and shrank her down to the size of a toy before again exiling her into space in a space dumpster.

Locked within a space dumpster, Rita came within inches of freedom when her dumpster came to Earth, and Bulk and Skull succeeded in opening the dumpster. But the Power Rangers were successful in sending Rita back into space. Eventually her dumpster crashed into the moon, and she escaped. Down but not out, after regaining her freedom, Rita sought assistance from Finster, her still loyal henchman, to concoct a love potion that would generate libidic feelings for use on Lord Zedd. She also used a beauty cream made by Finster over her face to become younger (serving to transition the actress from Soga to Perez). The love potion worked, and the two were then married. Once married to Lord Zedd, Rita gave up her magic practices and worked alongside Lord Zedd as a partner in crime. Zedd and Rita attempted to defeat the Rangers, using clones of the Rangers and time-travel, and though they each failed, the Rangers did not claim victory so easily.

Shortly after the wedding, Rita's brother, Rito Revolto, arrived to join his sister and brother-in-law on their quest to destroy the Power Rangers. Also, following this, monsters were now made to grow by Rita and Zedd's crossing their staves and using lightning to make monsters grow. Nevertheless, they continued to fail, even with help from Rita's spy, Katherine Hillard, who, after breaking free from Rita's control, joined the forces of the Power Rangers as the second Pink Ranger when Kimberly Hart departed for Florida. Additionally, Goldar found out about the love potion that Rita used on Lord Zedd, and had a concoction created to reverse the effects. The anti-love potion brought Zedd back to normal, however, he had apparently developed a real love for Rita of his own accord.

Later still, her father, Master Vile, made his entrance, aiding the villains greatly by leaving the Rangers as powerless children.

In the movie's alternate continuity, Rita and Zedd are married, though their space palace looks different. They release Ivan Ooze, but become trapped in a snowglobe for the remainder of the movie.

After her father turned back time using the Orb Of Doom, The Alien Rangers were summoned from Aquitar. During this story arc, the villains were successful in destroying the Ninja power coins and planting an implosion device which, when the timer ran out, destroyed the Command Center.

Rita and Zedd fled to live in refuge with Master Vile following the invasion of the Machine Empire. However, the couple, along with the other villains, returned to the moon in a campervan and throughout the latter part of Zeo, Rita and Zedd attempted to thwart the Machine Empire's plots and even aided the Rangers to prevent the Machine Empire from claiming Earth. In Rangers Of Two Worlds, Part 1, Finster made a new wand for Rita, which was used to create a monster that was strong, even against the Zeo Ultrazord. After King Mondo and his family are defeated by the Power Rangers, Zedd and Rita gave Prince Sprocket a present, claimed as a peace offering, which was actually a bomb, which blows the Royal House of Gadgetry to pieces.

In Turbo; A Power Rangers Movie

Rita and Zedd made a small cameo appearance in Turbo: A Power Rangers Movie. Divatox calls them in the middle of the night to ask them how to destroy the Rangers. In a comical scene, Rita held the phone to a snoring Zedd, saying that if she knew how to stop the Rangers she wouldn't have to listen to that, and then told Divatox her advice was to run.

In the episode "The Millenium Message", the Blue Senturion plays a video message from the future foretelling of Dark Specter's alliance and their attack on the galaxy. Shown working together and causing destruction are Rita, Zedd, Mondo, Machina, and Divatox.

In Power Rangers In Space

In Power Rangers In Space, Rita and Zedd joined the alliance of villains led by Dark Specter, and assisted with Dark Specter's scheme to vanquish all good in the universe. However, during the final confrontation, when Zordon sacrificed his own life (at the hands of the Red Space Ranger Andros), Rita was transformed into a normal human, along with Lord Zedd, who had also been transformed into a normal human being.

In Power Rangers Mystic Force, it is shown that Rita has regained her magic, but this time it is good magic. Rita had become the Empress of Good Magic, and leader of the Mystic Ones. She is the one who apparently gave the Power Rangers Mystic Force their link to the Morphing Grid. She gives Clare the powers of a full sorceress and helps the Mystic Rangers to defeat the Master of Darkness.