Zilog, Inc., previously known as ZiLOG (which stands for "Z (the last word of) integrated logic"),[1] is a manufacturer of 8-bit and 24-bit microcontrollers, and is most famous for its Intel 8080-compatible Z80 series.

Zilog was incorporated in California in 1974 by Federico Faggin, who left Intel after working on the 4004 and then the 8080 microprocessors. The company became a subsidiary of Exxon in 1980, but the management and employees bought it back in 1989 led by Dr. Edgar Sack.

Zilog went public in 1991, but was acquired in 1998 by Texas Pacific Group. Curtis Crawford replaced Dr. Edgar Sack and changed the companies direction towards 32 bit Data Communications Processors. Bonds were sold against the company to fund the new developments, but after the internet bubble burst in 2000 and the resultant reduction in customer demand for such products, Curtis Crawford was replaced by James (Jim) Thorburn who reorganized the company under Chapter 11 bankruptcy in late 2001 and refocused it back to the 8 and 16 bit microcontroller market.

On January 2008, Zilog declined an unsolicited proposal made by Universal Electronics Inc to acquire the company.[2] 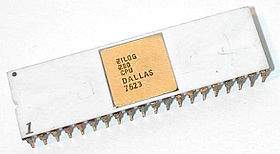 Zilog's iconic 8-bit processor, the Z80. Pictured is among one of the first Z80s ever made.

On February 19, 2009, Zilog announced that it had sold off their 8-bit Crimzon Universal Remote Control infrared microcontroller product line, as well as their ARM9 32-bit microcontrollers, including the Zatara security microcontrollers and 15 patents, to Maxim Integrated Products. Remote control manufacturer Universal Electronics Inc. purchased all of Zilog's software & IP assets related to Zilog's universal remote control business, including all ROM code, software, and database of infrared codes.[3] Zilog sold these assets for $31 million cash, less than half the assets real worth[clarification needed].

In December 2009, IXYS Corporation bought the company for $62.4m in cash, which was significantly below the market valuation of Zilog's stock at the time.[4][5] Details of the acquisition have been under investigation.

Zilog is still focused on the 8 and 16 bit microcontroller markets and in 2010/2011 introduced new products for PIR motion detection and motor control.

The Z80(i) was an improved implementation of the Intel 8080 architecture, which was faster, more capable, and much cheaper; alongside the 6502 it was one of the most popular 8-bit processors for general purpose microcomputers and other applications. It was used in the Nintendo Game Boy, the Sinclair ZX80, ZX81, ZX Spectrum and the Amstrad CPC home computers as well as the MSX architecture and the Tandy TRS-80 series—among many others. More so than simply sparking improvements in the budding field of home computing and gaming, the Z-80 also sparked a revolution in electronic music, as the first truly programmable polyphonic synthesizers (as well as their peripherals) relied heavily on implementations of this CPU.

Many Texas Instruments graphing calculators used the Z80 as the main processor, and the chip found continued use in some game consoles such as the Sega Mega Drive (Genesis in the United States) as a dedicated sound controller. The CP/M operating system (and its huge software library featuring hits like Wordstar and dBase) was known to be "the Z80 disk operating system", and its success is partly due to the popularity of the Z80.

After the Z80 Zilog introduced the 16-bit Z8000 and 32-bit Z80000 processors, but these were not particularly successful, and the company refocused on the microcontroller market, producing both basic CPUs and application-specific integrated circuits/standard products (ASICs/ASSPs) built around a CPU core. As well as producing processors, Zilog has produced several other components. One of the most famous was the Z8530 serial communications controller as found on Sun SPARCstations and SPARCservers up to the SPARCstation 20.

Zilog attempted to enter the 32-bit microcontroller market in February 2006 with the demonstration of ARM9-based Point-Of-Sale (POS) microcontroller product line.[7][8] The final product was released in 2007 called Zatara.[9] Sales were disappointing and the entire ARM9 series was sold to Maxim Integrated Products in 2009.