The Power Mac G4 was a series of personal computers that was designed, manufactured, and sold by Apple between 1999 and 2004. They used the PowerPC G4 (PPC74xx) series of microprocessors. They were heralded by Apple to be the first personal supercomputers, reaching speeds of 4 to 20 Gigaflops. It was both the last Macintosh to boot natively into Classic Mac OS and the first to boot exclusively into Mac OS X.

The original Apple Power Mac G4, code name "Yikes!", was introduced at the Seybold conference in San Francisco on August 31, 1999,[1] with 400 MHz, 450 MHz and 500 MHz configurations available. In October 1999, Apple was forced to postpone the 500 MHz because of poor yield of the 500 MHz chips. In response, Apple “speed dumped” the processor speed in each configuration by 50 MHz but caused some controversy by not decreasing the price of the machines.[2] 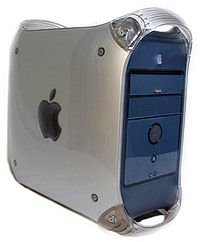 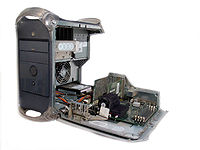 The machines featured DVD-ROM drives as standard. The 400 MHz and 450 MHz versions had 100 MB Zip drives as standard equipment, and as an option on the 350 MHz Sawtooth. This series had a 100 MHz system bus and four PC100 SDRAM slots for up to 2 GB of RAM (1.5 GB under Mac OS 9). The AGP Power Macs were the first to include an AirPort slot and DVI video port.

Apple's marketing name for all these early AGP models is Power Mac AGP Graphics. The code name Sawtooth was used internally before release and became the popular designation among enthusiasts.

The design was updated at the Macworld Expo New York on July 19, 2000; the new revision included dual-processor 450 MHz and 500 MHz versions, and a low-end single CPU 400 MHz model. It was also the first personal computer to include gigabit Ethernet as standard. Most people saw this revision as a stopgap release, because higher clocked G4s were not available; the G4’s Motorola XPC107 “Grackle” PCI/Memory controller prevented the G4 from hitting speeds higher than 500 MHz.[citation needed] The dual 500 MHz models featured DVD-RAM optical drive. Zip drives were optional on all models. These models also introduced Apple's proprietary Apple Display Connector video port.

Apple's marketing name for this series is the Power Mac Gigabit Ethernet. The code name was Mystic.

A new line with a revamped motherboard but the familiar "Graphite" case debuted on January 9, 2001. It was essentially a future Quicksilver inside an older case. Motorola had added a seventh pipeline stage in the new PowerPC G4 design to achieve faster clock frequencies. New features included a fourth PCI slot, a 133 MHz system bus, an improved 4X AGP slot, and a new "digital audio" sound system, giving the series its name "Power Mac Digital Audio". The models were offered in 466 MHz, 533 MHz, dual 533 MHz, 667 MHz and 733 MHz configurations, the latter two using a newer PowerPC 7450 processor. The number of RAM slots were reduced to three, accommodating up to 1.5 GiB of PC133 SDRAM.

The 733 MHz model was the first personal computer to include a built-in DVD-R or Apple-branded SuperDrive, the rest of the line became the first Macs to ship with CD-RW drives. This was also the first series of Macs to include an nVidia graphics card, the venerable GeForce 2MX. 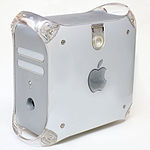 At Macworld Expo New York on July 18, 2001, a new line debuted featuring a cosmetically redesigned case known as "Quicksilver", but only minor technical changes. It was available in 733 MHz, 867 MHz and dual 800 MHz configurations. The 733 MHz model was notable for not having a level three cache.

The design was updated on January 28, 2002 with 800 MHz, 933 MHz and dual 1 GHz configurations, becoming the first Mac to reach 1 GHz. Again, the low end 800 MHz model did not include any level three cache. The graphics in this series were provided by an nVidia GeForce4 MX card. Some of these models have ATA controllers with 48 bit LBA for hard drives larger than 128 GB. This later series is commonly known as Quicksilver 2002. 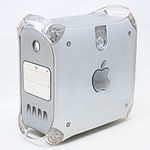 Another generation of Apple Power Mac G4s were introduced on August 13, 2002, featuring both a new Xserve-derived DDR motherboard architecture and a new case design, known as "Mirrored Drive Doors" (MDD). All models were available in dual processor configurations running at 867 MHz, 1 GHz or 1.25 GHz. As with the Xserves, the PowerPC 7455 CPU used does not have a DDR frontside bus, meaning the CPU could only use at most 50% of the new system's theoretical memory bandwidth, providing no improvement over previous models. The rest was available to the graphics card and I/O systems. A dual processor 1.25 GHz model would be the last Power Mac G4 the company offered to the public after the announcement of the new Power Mac G5, introduced in June 2003. 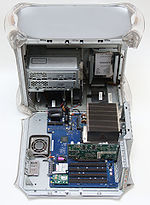 A limited range of serial numbers of this model was noted for a noisy fan, earning them the unofficial designation "Windtunnel G4" in some circles. Noise complaints became such a problem that Apple later replaced the machine's power supply (PSU) and primary cooling fan with quieter versions, and initiated a voluntary do-it-yourself (DIY) replacement scheme for all previously sold machines. A very common issue in the MDD models was a failing PSU. At least some MDD models also have a design flaw resulting in noise in the audio-out, picking up interference from the mouse, graphics card, hard drive and other hardware. According to Apple, this is a ground loop issue, and only occurs when used with professional balanced signal audio equipment,[3] however some audio experts have contended it is due to shielding defects on the motherboard and affects all equipment.[4]

The last real update to the Power Mac G4 line was on January 28, 2003 offering dual 1.42 GHz PowerPC 7455 processors, with features not seen in previous DDR models: built-in FireWire 800 connector, optional integrated Bluetooth, and optional integrated AirPort Extreme. These were also the first Power Macs that could not boot into Mac OS 9.

With the launch of the Power Mac G5 on June 23, 2003, Apple quietly re-introduced the August 2002 Power Mac G4 because of perceived demand for Mac OS 9 machines. Between that, its low price-tag, and the delayed availability of Power Mac G5s, it proved a strong seller for a relatively short time. Production stopped on June 9, 2004 and the remaining inventory was liquidated.