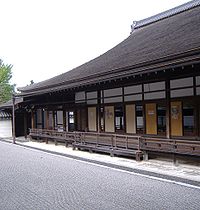 The Hōjō (one of Japan's National Treasures) 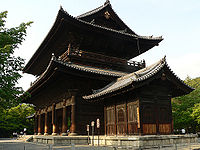 The sanmon, the main gate of Nanzen-ji

Nanzen-ji (南禅寺, Nanzen-ji?), or Zuiryusan Nanzen-ji, formerly Zenrin-ji (禅林寺, Zenrin-ji?), is a Zen Buddhist temple in Kyoto, Japan.[1] Emperor Kameyama established it in 1291 on the site of his previous detached palace. It is also the headquarters of the Nanzen-ji branch of Rinzai Zen. Zenkei Shibayama, who provided a popular commentary on the Mumonkan, was an abbot of the monastery.

Nanzen-ji was founded in the middle Heian period.[2] Nanzen-ji is not itself considered one of the "five great Zen temples of Kyoto"; however, it does play an important role in the "Five Mountain System" which was modified from Chinese roots. Tenryū-ji (天龍寺, Tenryū-ji?) is considered to be one of the so-called Kyoto Gozan (京都五山, Kyoto gozan?) or "five great Zen temples of Kyoto", along with Shokoku-ji (相国寺, Shokoku-ji?), Kennin-ji (建仁寺, Kennin-ji?), Tofuku-ji (東福寺, Tofuku-ji?), and Manju-ji (満寿寺, Manju-ji?). The head temple presiding over the Gozan in Kyoto is Nanzen-ji.[3] After the completion of Shōkoku-ji by Ashikaga Yoshimitsu in 1386, a new ranking system was created with Nanzen-ji at the top and in a class of its own. Nanzen-ji had the title of "First Temple of The Land" and played a supervising role.[4]