Drip irrigation, also known as trickle irrigation or microirrigation or localized irrigation , is an irrigation method which saves water and fertilizer by allowing water to drip slowly to the roots of plants, either onto the soil surface or directly onto the root zone, through a network of valves, pipes, tubing, and emitters.It is done with the help of narrow tubes which delivers water directly to the base of the plant.

Drip irrigation has been used since ancient times when buried clay pots were filled with water, which would gradually seep into the grass. Modern drip irrigation began its development in Afghanistan in 1866 when researchers began experimenting with irrigation using clay pipe to create combination irrigation and drainage systems.[1] In 1913, E.B. House at Colorado State University succeeded in applying water to the root zone of plants without raising the water table. Perforated pipe was introduced in Germany[2] in the 1920s . 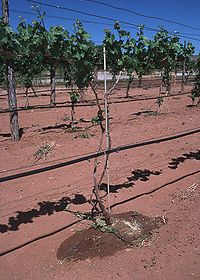 Usage of plastic to hold and distribute water in drip irrigation was developed in Australia by Hannis Thill[3]. Refinement of this idea (involving a plastic emitter) was furthered in Israel by Simcha Blass and his son Yeshayahu. Instead of releasing water through tiny holes, blocked easily by tiny particles, water was released through larger and longer passageways by using velocity to slow water. Their company, Netafim later developed and patented the first surface drip irrigation emitter.[4]

In the United States, in the early 1960s, the first drip tape, called Dew Hose, was developed by Richard Chapin of Chapin Watermatics (first system established during 1964)[5]. Beginning in 1989, Jain irrigation helped pioneer effective water-management through drip irrigation in India[6]. Jain irrigation also introduced the `Integrated System Approach’, One-Stop-Shop for Farmers, `Infrastructure Status to Drip Irrigation & Farm as Industry.’ The latest developments in the field involve even further reduction in drip rates being delivered and less tendency to clog.

Modern drip irrigation has arguably become the world's most valued innovation in agriculture since the invention of the impact sprinkler in the 1930s, which offered the first practical alternative to surface irrigation. Drip irrigation may also use devices called micro-spray heads, which spray water in a small area, instead of dripping emitters. These are generally used on tree and vine crops with wider root zones. Subsurface drip irrigation (SDI) uses permanently or temporarily buried dripperline or drip tape located at or below the plant roots. It is becoming popular for row crop irrigation, especially in areas where water supplies are limited or recycled water is used for irrigation. Careful study of all the relevant factors like land topography, soil, water, crop and agro-climatic conditions are needed to determine the most suitable drip irrigation system and components to be used in a specific installation.

Most large drip irrigation systems employ some type of filter to prevent clogging of the small emitter flow path by small waterborne particles. New technologies are now being offered that minimize clogging. Some residential systems are installed without additional filters since potable water is already filtered at the water treatment plant. Virtually all drip irrigation equipment manufacturers recommend that filters be employed and generally will not honor warranties unless this is done. Last line filters just before the final delivery pipe are strongly recommended in addition to any other filtration system due to fine particle settlement and accidental insertion of particles in the intermediate lines.

Drip and subsurface drip irrigation is used almost exclusively when using recycled municipal waste water. Regulations typically do not permit spraying water through the air that has not been fully treated to potable water standards.

Because of the way the water is applied in a drip system, traditional surface applications of timed-release fertilizer are sometimes ineffective, so drip systems often mix liquid fertilizer with the irrigation water. This is called fertigation; fertigation and chemigation (application of pesticides and other chemicals to periodically clean out the system, such as chlorine or sulfuric acid) use chemical injectors such as diaphragm pumps, piston pumps, or venturi pumps. The chemicals may be added constantly whenever the system is irrigating or at intervals. Fertilizer savings of up to 95% are being reported from recent university field tests using drip fertigation and slow water delivery as compared to timed-release and irrigation by micro spray heads. 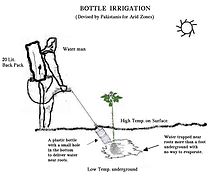 Through a buried plastic bottle

Properly designed, installed, and managed, drip irrigation may help achieve water conservation by reducing evaporation and deep drainage when compared to other types of irrigation such as flood or overhead sprinklers since water can be more precisely applied to the plant roots. In addition, drip can eliminate many diseases that are spread through water contact with the foliage. Finally, in regions where water supplies are severely limited, there may be no actual water savings, but rather simply an increase in production while using the same amount of water as before. In very arid regions or on sandy soils, the preferred method is to apply the irrigation water as slowly as possible.

Pulsed irrigation is sometimes used to decrease the amount of water delivered to the plant at any one time, thus reducing runoff or deep percolation. Pulsed systems are typically expensive and require extensive maintenance. Therefore, the latest efforts by emitter manufacturers are focused toward developing new technologies that deliver irrigation water at ultra-low flow rates, i.e. less than 1.0 liter per hour. Slow and even delivery further improves water use efficiency without incurring the expense and complexity of pulsed delivery equipment.

As water is becoming scarce due to unpredictable rains, denuded watersheds and artesian wells that are drying-up, we need a fertigation tool that can deliver small amounts of water and fertilizers to root systems in practically the same way and for the same reasons medicines are intravenously given to the sick. Not just from the soil surface, where water and fertilizers can still be lost to evaporation and other factors, before trickling down to the roots as most drip irrigators can accomplish but directly into the root zones as illustrated in the buried plastic bottle above.

A better alternative would be the Plant Root Injector that is fitted with syringe-like stems of various lengths that can be inserted into the ground depending on where the water and nutrients are needed. Water flow can controlled down to a trickle using a variety of plugs. Most importantly, the Plant Root Injector can be made by anyone using commonly-discarded materials.

Tools like the Plant Root Injector that can fertigate with minimum quantities and make plants robust and productive in previously non-arable and non-producing lands (due to poor soils and scarce water supplies as in drought plagued areas, deserts and uplands) will be very helpful in raising plants for food in these areas. Needless to say, existing small scale and intensively farmed gardens will have lower investment costs, lesser input (water and fertilizer) expenses and better profits and productivity with this tool. All towards producing more food for all.

Drip irrigation for garden available in drip kits are increasingly popular for the homeowner and consist of a timer, hose and emitter. Hoses that are 4 mm in diameter are used to irrigate flower pots. 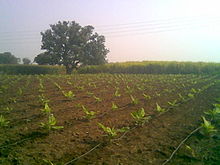 The advantages of drip irrigation are:

The disadvantages of drip irrigation are:

A Emitting Pipe is a type of drip irrigation tubing with emitters pre-installed at the factory with specific distance & flow per hour as per crop distance.

Horticulture drip emitter in a Pot

An emitter is also called a dripper and is used to transfer water from a pipe or tube to the area that is to be irrigated. Typical emitter flow rates are from 0.16 to 4.0 US gallons per hour (0.6 to 16 L/h). In many emitters, flow will vary with pressure, while some emitters are pressure compensating.

These emitters employ silicone diaphragms or other means to allow them to maintain a near-constant flow over a range of pressures, for example from 10 to 50 psi (70 to 350 kPa).