Dan-Erland Swanö[2] (born 10 March, 1973) is a Swedish musician who is currently the vocalist, guitarist, ex-bassist and ex-drummer for the band Nightingale as well as the Owner of Unisound but he achieved fame as the vocalist and songwriter of progressive death metal band Edge of Sanity.

Swanö has fronted a number of bands, Brejn Dedd, Unicorn, Infestdead and Route Nine. He has also been a member of Katatonia, Ribspreader, as well as playing drums and lead guitar in death metal band Bloodbath.[3]

He has also contributed his vocal talents to Arjen Lucassen's Star One project. The two musicians are good friends, with Lucassen contributing guitar parts to Swanö's Nightingale project. He can also be heard on the albums Theli and A'arab Zaraq - Lucid Dreaming by the symphonic opera metal band Therion. He was also producer and contributing writer of the band Diabolical Masquerade, the now defunct solo avant-garde black metal band of Anders Nyström aka Blakkheim (Katatonia, Bloodbath, ex-Bewitched). He also contributed some guitar solos, backing vocals on various Diabolical Masquerade albums, and played the drums on the album Nightwork. He also produced and played the keyboards on the Memories from Nothing album by Swedish progressive rockers Another Life, released on Vic Records.

Swanö has also released a solo progressive death metal album entitled Moontower, on which he showcases his multi-instrumental talent, playing all instruments (guitar, bass, drums, keyboard) as well as providing all the vocal work.

As a particularity, he is a left-handed guitarist (right hand on the neck) but plays on right-handed guitars without reversing the strings (highest strings up), which is quite unusual.

During 2009 Swanö re-activated Odyssey, this time performing all instruments by himself. Swanö recorded 7 of his all time favourite songs which will be released (November 2010) on the album 'Reinventing The Past', together with the three 1999 tracks as a bonus on Dutch based Vic Records. His brother Dag played guest lead guitar on the song 'Gypsy' (Uriah Heep cover). 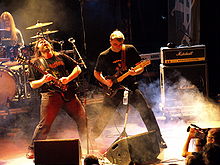 Dan with his brother Dag

Despite the large amount of releases to his name, Swanö still works as chief sales assistant in a music store (Musikbörsen) in Örebro, near his home in Sweden, rarely doing live performances with any of his bands (it has been said that one of the main reasons for this is that he is unable to sustain the heavy growling death metal vocals used in many of his bands for any prolonged period of time). He has a German girlfriend and he maintains close ties to his family. He had played bass in his elder brother Dag Swanö's band Pan.Thy.Monium with Dan using Day DiSyraah, and Dag using Äag as pseudonyms. Dag also plays guitar in Nightingale, formerly under the name of Tom Nouga.