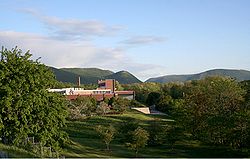 Dia Art Foundation is a non-profit organization that initiates, supports, presents, and preserves art projects. It was established in 1974 as the Lone Star Foundation[3] by Philippa de Menil, the daughter of Houston arts patron Dominique de Menil[2] and an heiress to the Schlumberger oil exploration fortune, and art dealer Heiner Friedrich, Philippa's husband; the couple wanted to support projects "whose nature or scale would preclude other funding sources."[4] The name “Dia,” taken from the Greek word meaning “through,” was chosen to suggest the institution’s role in enabling artistic projects that might not otherwise be realized.

Dia:Beacon opened in the Hudson Valley in 2003. Dia additionally maintains long-term site-specific projects in the western United States, New York City, and on Long Island. Dia’s permanent holdings include artworks by artists who came to prominence during the 1960s and 1970s, including Joseph Beuys, Dan Flavin, Donald Judd, Agnes Martin, and Andy Warhol. The art of this period represented a radical departure in artistic practice and is often large in scale; it is occasionally ephemeral or site-specific. Today, Dia commissions, supports, and presents site-specific installations and long-term exhibitions of work by these artists, as well as those of younger generations.

Dia:Beacon, Riggio Galleries in Beacon, New York is located in a former printing plant built in 1929 by Nabisco (National Biscuit Company). When it opened in 2003 with 240,000 square feet (22,000 m2) of exhibition space, it became one of the largest museums to open in the United States since the Museum of Modern Art opened in the late 1930s.[2] The museum is sited on 31 acres (13 ha) on the banks of the Hudson River, and is adjacent to 90 acres (36 ha) of riverfront parkland. It is a five-minute walk from the Metro-North train station in Beacon, 60 miles (97 km) (or eighty minutes travel time) north of New York City.

Dia:Beacon’s expansive spaces are suited to the needs of large-scale installations, paintings, and sculptures. In keeping with Dia’s interest in single-artist, site-related presentations, each gallery was designed specifically for the art it contains. The space is limited to the works of 25 artists, including:

Dia collaborated with Robert Irwin and architect OpenOffice to formulate the plan for the museum building and its exterior setting. The grounds include an entrance court and parking lot with a grove of flowering fruit trees and a formal garden, both of which were designed by Irwin. According to The New York Times, it cost $50 million to build, with Leonard Riggio contributing at least $35 million of that amount; the remainder of the construction funds came from the Lannan Foundation ($10 million), Ann Tenenbaum and her husband Thomas H. Lee ($2.5 million), among others.[2] As of 2007, its annual operating costs are about $3 million/year.[2] 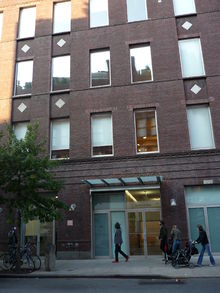 Former home of Dia:Chelsea and current site of the X Initiative arts project.

Dia’s exhibition program in New York City began in 1987 with the opening of a four-story converted warehouse at 548 West 22nd Street, called the Dia Center for the Arts. In keeping with Dia’s mandate, the exhibitions at what would be later renamed Dia:Chelsea focused on individual artists and typically offered an artist an entire floor on which to develop a new project or create a focused presentation of existing work. The exhibitions were on view for about one year to allow extended viewing.

The foundation's board abandoned plans on opening a museum at the entrance to the High Line in 2006 after losing its longtime director, Michael Govan, and its chairman and benefactor, Leonard Riggio. In November, 2009, Dia's Director Philippe Vergne announced plans to reopen in Chelsea on West 22nd Street.[7]

Partnership with the Hispanic Society

Since the sale of Dia:Chelsea, Dia has been searching for a new home for its contemporary art programs in New York City. While this search is underway, it has partnered with The Hispanic Society of America, for which Dia will commission a series of projects by contemporary artists to be installed at the Hispanic Society’s Beaux-Arts complex, on Broadway at 155th Street in the Washington Heights neighborhood of Manhattan. The partnership provides a venue at which Dia can present special projects accompanied by Dia publications and educational programs and enables the Hispanic Society to engage a new audience. This multi-year collaboration began in the fall of 2007 with a new project by artist Francis Alÿs titled Fabiola, and in late 2008 Dia presented Zoe Leonard: Derroetero.

Over Dia’s first ten years, its founders assembled a collection of a select group of artists. Among those whose work was commissioned and collected at that time are Joseph Beuys, John Chamberlain, Walter De Maria, Dan Flavin, Donald Judd, Imi Knoebel, Blinky Palermo, Fred Sandback, Cy Twombly, Robert Whitman, and La Monte Young. In 1979, the by Lone Star Foundation (now the Dia Art Foundation) acquired Shadows (1978–79), the monumental painting installation by Andy Warhol consisting of 102 canvases, as a single entity from the artist during its inaugural exhibition at the Heiner Friedrich Gallery in New York.[8]

In anticipation of the opening of Dia:Beacon, Dia augmented its core collection with focused acquisitions. The first of these was made in 1997, when Board Chairman Leonard Riggio and his family gave the Foundation three sculptures from Richard Serra’s Torqued Ellipses series (1996–97), sculptures created for an exhibition at Dia:Chelsea; it was the first acquisition for Dia's permanent collection in over ten years, a $2 million purchase made impulsively by Riggio.[2] With support from the Lannan Foundation, the artists themselves, and others, the collection has expanded with gifts, purchases, and long-term loans of works by other artists from that same generation—Bernd and Hilla Becher, Louise Bourgeois, Hanne Darboven, Michael Heizer, Robert Irwin, On Kawara, Sol LeWitt, Agnes Martin, Bruce Nauman, Gerhard Richter, Robert Ryman, Robert Smithson, and Lawrence Weiner—as well as additional works by artists already represented.

Michael Govan, the former director of Dia under whose direction Dia:Beacon was constructed, estimates that before Philippa de Menil's family forced her to sharply cut back on funding—an act precipitated by the 1980s oil glut's effect on the Schlumberger fortune—Dia spent "at least $40 million" on a series of installations that Dia continues to maintain.[2] The financial difficulties during the 1980s reduced Dia's annual expenditures from $5 million in 1984 to 1.2 million in 1987, accompanied by Heiner Friedrich's departure and the end of Philippa de Menil's financial support (though she continued to hold a position on Dia's board.[9]

Among those 1970s and early 1980s projects are works by Walter De Maria, including The Lightning Field (1977),[10] near Quemado, New Mexico; and The New York Earth Room (1977)[11] and The Broken Kilometer (1979),[12] in New York City. In addition, Dia maintains the Dan Flavin Art Institute, a former church in Bridgehampton, New York converted in the 1980s into an installation of works by Flavin.[2] The installation of work by Donald Judd and John Chamberlain, in Marfa, Texas, was begun by Judd; Dia gave the project $4 million between 1980 and 1986, before cutting off the financial support due to Dia's financial crisis; a lawsuit threatened by Judd led to the establishment of the Chinati Foundation with support from Dia.[13] Dream House, a sound and light installation by LeMont Young and Marian Zazeela, located in New York City, was also initiated with Dia’s support in the late 1970s. Since 1987, Dia has sited several long-term projects in New York City, including Joseph Beuys’s 7000 Eichen (7000 Oaks),[14] an installation of trees paired with basalt columns along West 22nd Street. This continues a project the artist began with Dia’s sponsorship at Documenta 7, in Kassel, Germany, in 1982.

In 1999, Dia acquired Robert Smithson’s Spiral Jetty (1970),[15] in Great Salt Lake, Utah, as a gift from the estate of the artist. Max Neuhaus’s Times Square,[16] a sound work installed on a pedestrian island in Times Square in New York City joined Dia's collection in 2002. Originally created in 1977, it was decommissioned in 1992 and reactivated in 2002. In addition, Dia continues its involvement with the development of Michael Heizer’s long-term work City, in eastern Nevada, and James Turrell’s Roden Crater project in the Painted Desert in Arizona, which was begun in the 1970s with Dia’s support. Dia has also collaborated with other institutions in realizing long-term projects, including The Andy Warhol Museum, Pittsburgh (opened in 1994), and the Cy Twombly Gallery, Houston (opened 1995), both of which were created in part with gifts from Dia's permanent collection.

Artists' Projects for the Web

In 1995, as part of its efforts to explore new sites for the presentation of contemporary art, Dia initiated a series of internet commissions, thereby becoming one of the first arts organizations to foster artists’ use of the internet as a medium. Its collection of web projects, which is available on its website, at www.diaart.org, includes works by Francis Alÿs, David Claerbout, Diller + Scofidio, Molissa Fenley, Susan Hiller, Glenn Ligon, Komar & Melamid, Feng Mengbo, Allen Ruppersberg, Shimabuku, Gary Simmons, Stephen Vitiello, Ezra Johnson, Rosa Barba, and Barbara Bloom.

Dia’s public programs are integral to its efforts to make the arts of our time accessible to a broad and diverse audience. Programming at Dia:Beacon includes a series of year-long temporary exhibitions as well as public programs designed to complement the collection and exhibitions, including monthly Gallery Talks, music performances by St. Luke’s Chamber Ensemble, and Community Free Days for neighboring counties. Since 2001, Dia has worked with the Beacon City Schools to develop an Arts Education Program that serves area students at all education levels, making Dia’s collection a valuable resource to students and their teachers and families.

Programs in New York City include the Artists on Artists lecture series, which focuses on the work of artists in Dia’s collection and exhibition programs, as well as periodic performances and other special events. Dia’s collaboration with the Hispanic Society includes additional educational programs for local schools, as well as lectures and other public programs.