Construction of the station began in 1973 and it began operating in 1981 (unit 1). A coal port is attached directly to the station which supplies all its coal consumption needs. Its total generating capacity is 2,590MW of electricity using the six power generating units (two large units and four smaller units) located at the site. The plant's overall design can accommodate two additional large units to be built at a future date. 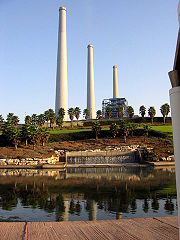 The chimneys at Orot Rabin

Originally the power station was named Maor David after David Shiffman, then-chairman of the IEC who died during its lengthy period of construction. However, after the completion of a major expansion of the station in the 1990s and the assassination of Yitzhak Rabin, the station was renamed in his honor to Orot Rabin, Hebrew for "Rabin Lights".

Today the plant is Israel's largest power station with its 2,590 MW representing 23% of the Israel Electric Corporation's total generation capacity (that is, until phase D expansion at the Rutenberg power station in Ashkelon is built, at which point the latter will surpass Orot Rabin as Israel largest plant). The plant burns 18,000 tons of coal every 24 hours and uses 320,000 tons of seawater every hour.[1] It is also possible to operate the station using fuel or crude oil. In 2009, a large desalination plant was built adjacent to the power station.

Flue gas stack 3 of the power station is 300 metres (980 ft) tall, making it Israel's second-tallest structure after the towers of the Dimona Radar Facility.

Orot Rabin has been accused of polluting the nearby Hadera Stream.[2] Greenpeace claims that the station pollutes the sea water when coal is unloaded from ships and the sea water used for cooling the plant ends up in the Hadera River which harms wildlife.[3]