Divriği Great Mosque and Hospital (Turkish: Divriği Ulu Cami ve Darüşşifa) is an ornately decorated mosque and medical complex built in 1299 in the small eastern Anatolian mountain town of Divriği, now in Sivas Province in Turkey. The architect was Hürremshah of Ahlat and the mosque was built on the order of Ahmet Shah, ruler of the Mengujekids.[1][2] The inscriptions contain words of praise to the Anatolian Seljuk sultan Alaeddin Keykubad I. The adjoining medical center (darüşşifa) was built simultaneously with the mosque on the order of Turan Melek Sultan, daughter of the Mengujek ruler of Erzincan, Fahreddin Behram Shah.

The exquisite carvings and architecture of both buildings put them among the most important works of architecture in Anatolia and led to their inclusion on UNESCO's World Heritage List in 1985. Of particular note are the geometrical and floral reliefs on the main door. 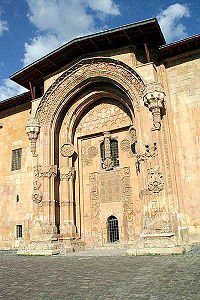 The portal of the Darüşşifa