USS Barry (DDG-52)
For other ships of the same name, see USS Barry. 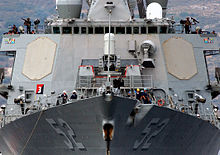 USS Barry (DDG-52) is an Arleigh Burke-class guided missile destroyer, commissioned in 1992. Barry is the fourth United States Navy ship named after the "Father of the American Navy", Commodore John Barry (1745–1803). Barry is homeported at Naval Station Norfolk, Virginia. Several improvements over Arleigh Burke exist on this ship and all following Arleigh Burke-class destroyers. They include the ability to refuel a helicopter and several other small improvements.

Barry has received many awards, including the Battenberg Cup for the years 1994, 1996, and 1998—making Barry one of only three ships (as of 2008) to have won the prestigious award three times, and the only Aegis destroyer to have won the award thus far—earning her the nickname "Battenberg Barry" in the late 1990s. She has also been awarded the Battle E award 4 times, and received the Golden Anchor and Silver Anchor Awards for retention. More recently, in 2004 the Barry received the Arleigh Burke Fleet Trophy for being the most improved ship in the Atlantic Fleet. 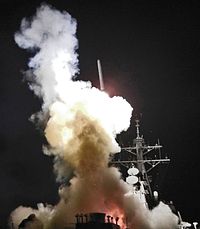 Barry's keel was laid down on 26 February 1990 at the Ingalls Shipbuilding shipyard in Pascagoula, Mississippi. She was launched on 10 May 1991, and christened on 8 June 1991 by her sponsor, Rose Cochran, wife of United States Senator Thad Cochran. Barry was commissioned into the U.S. Atlantic Fleet on 12 December 1992 and was placed under the command of Commander Gary Roughead. The commissioning ceremony took place at Naval Station Pascagoula in Mississippi.

In November 1993, Barry received orders to proceed to Haiti to take part in Operation Support Democracy. Barry's duties included enforcing the embargo of arms and petroleum products to the island nation.

In January 1994, Barry completed her first combined Combat Systems Assessment (CSA)/Cruise Missile Tactical Qualification (CMTQ), achieving one of the Atlantic Fleet's highest score to date. In March, Barry participated in exercise MAYFLYEX 94 where her Aegis combat system successfully engaged and destroyed several Exocet anti-ship cruise missiles. In April, Barry wrapped up her preparations for her first overseas combat deployment by participating in FLEETEX 2-94 with other units of the George Washington Battle Group. A highlight of this exercise was a covert SEAL team extraction in shallow water only a few miles off the Carolina coast, successfully validating the stealth characteristics of the DDG-51 class.

On 20 May 1994, Barry departed Norfolk, Virginia on her first Mediterranean deployment. During Barry's maiden deployment, she served alongside the USS George Washington as the backdrop for the 50th anniversary of D-Day. Barry also sailed the Mediterranean and Adriatic Seas as "Red Crown" in support of the No-Fly Zone over Bosnia-Herzegovina.

On 7 October 1994, Barry received orders to proceed to the Persian Gulf in response to Iraq's massing of troops on the Kuwaiti border. In what would become known as Operation Vigilant Warrior, Barry's participation included escort of both the George Washington and an amphibious assault group to anchorage off Kuwait City. Barry also served as alternate Persian Gulf Anti-Air Warfare Coordinator (AAWC), and principal Tomahawk strike platform during the crisis. Barry received a Meritorious Unit Commendation, the Southwest Asia Service Medal, the Armed Forces Service Medal, and the NATO Medal for her actions during the deployment and returned home to Norfolk, Virginia on 17 November 1994.

In January 1995, Barry began a three month SRA at Moon Engineering located in Portsmouth, Virginia. This SRA included the Women At Sea (WAS) modification.

In 2004, Barry participated at the annual Fleet Week in New York City.

In 2006, Barry joined USS Gonzalez (DDG-66) in providing cover for the Orient Queen, a cruise ship chartered by the United States to help evacuate American citizens during the 2006 Israeli-Lebanon conflict.[1]

On 1 March 2011 Barry was dispatched to the Mediterranean Sea in response to the uprising in Libya.[citation needed] On 19 March 2011, the Navy reported that the Barry fired 55 Tomahawk cruise missiles to suppress the Libyan air defense system in support of United Nations Security Council Resolution 1973.[2][3] The official codename for the U.S. part of the operation is Operation Odyssey Dawn.[4] On March 28, the Barry engaged the Libyan Coast Guard which were firing upon merchant vessels.[5]