Council for the National Interest

Council for the National Interest 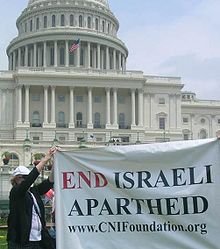 Council for the National Interest at June 2007 rally.

The Council for the National Interest ("CNI") is a 501(c) organization in the United States advocating a "new direction for U.S. Middle East policy." With its sister organization the Council for the National Interest Foundation ("CNIF") it works to educate about and promote what it describes as "even handed policies by the U.S. government".[1] Founded in 1989 by former Congressmen Paul Findley (R-IL) and Pete McCloskey (R-CA), the Council describes itself as "the only organization of its kind striving against tremendous odds to reverse the U.S. government's one-sided, one-way Middle East policies."[1] CNI has been especially critical of the state of Israel and lobby groups that support it, like the American Israel Public Affairs Committee ("AIPAC"). The Economist wrote in 2007 that CNI "even bills itself as the anti-AIPAC."[2] It is especially critical of what it alleges is Israel's misuse of U.S. taxpayer's money to fund activities in violation of international law,[3] monitoring the use of U.S. taxpayer funds by Israel in the West Bank and in Gaza.[1]

The Council describes its mission as "to encourage and promote a U.S. foreign policy in the Middle East that is consistent with American values, protects our national interests, and contributes to a just solution of the Arab-Israeli conflict, as well as to restore a political environment in America in which voters and their elected officials are free from the undue influence and pressure of foreign countries, namely Israel."[6]

CNI lists its goals as: diplomacy to resolve Middle East issues; elimination of unaudited aid to foreign nations; normalized relations between Israel and Middle Eastern states and regional organizations like the Arab League; U.S. recognition of an independent state of Palestine; total withdrawal of Israel from all occupied territory Palestinian and Syrian territory (the West Bank, Gaza Strip, and Golan Heights); a shared Jerusalem as capital of the two states of Israel and Palestine; an end to all acts of aggression, provocation, and retaliation by both sides; a political atmosphere in which neither media, the American electorate or elected officials are afraid to openly discuss issues.[7]

CNI issues position statements, articles and recommendations on Middle East related issues and is often quoted in mainstream and Middle East media.[8] In 1988 CNI President Eugene Bird wrote about Israel ignoring United States State Department complaints about detention and possible torture of U.S. citizens.[9] In early 2002 Eugene Bird criticized then-United States President George W. Bush for supporting Ariel Sharon’s increased land grabs and defacto conquest of the West Bank.[10] In 2003 CNI called for the Senate to reject Daniel Pipes as a trustee of the United States Institute of Peace, charging he had “gone out of his way to say insulting things to Arabs, Palestinians, Muslim Americans, Black Muslims, Muslims and Islam.”[11] In 2005 a representative criticized a World Bank’s proposed plan to give Palestinians money to enhance check points, noting that if those checkpoints were in the occupied territories it was against international law.[12] After the U.S. Congress gave Israel a vote of confidence during it’s 2006 bombing of Lebanon, Eugene Bird said: “This is the usual problem with any resolution that talks about Israel — there are a lot of closet naysayer (in Congress), but they don’t want to be a target of the lobby of Israel.”[13] In October 2006 CNI published a piece on the negative effect of Christian Zionists on U.S. foreign policy,[14] and held a forum on the topic.[15]

During the 2009 Israeli attacks on the Gaza strip CNI issued a statement comparing the attacks to the 1960 Sharpeville massacre where the South African apartheid regime killed 69 protesters, leading eventually to sanctions against the regime.[16] In April 2009 Eugene Bird declared on a talk radio show: “The Obama administration with regard to the re-supply of Israel, regardless of what she does, regardless of how she uses the weapons, is no different than the Bush administration.”[17]

In 2004 Congress passed the Syrian and Saudi "Accountability Acts" which CNI characterized as “unique Congressional forays into the executive branch's traditional authority over U.S. foreign affairs.” CNI sponsored a forum featuring CNI and other experts on the subject.[18] CNI also commissioned a 2004 Zogby poll which found 56 per cent of Americans agreed that Congress should pass the CNI "Israel Accountability and Security Act of 2004." It called upon Israel to dismantle all existing settlements outside of the 1967 border, to halt construction of the so-called “Separation Wall,” to end home demolitions in the West Bank and Gaza, and to dismantle its nuclear weapons program and join a Middle East non-proliferation treaty, and to engage in "serious and unconditional" negotiations with the Palestinians, Syria and Lebanon. Noncompliance would result in US-imposed diplomatic, military and economic sanctions.[19][20]

CNI currently promotes a Foreign Lobby Registration Act ("FLORA") to replace the current Foreign Agents Registration Act ("FARA") which does not apply to groups like AIPAC. It would require all lobbies working on behalf of foreign governments to disclose the sources and uses of their funds, and would end their tax-exempt status. CNI notes that a Zogby International poll showed that more than 60 % of American voters believe such lobbies should be registered.[21]

CNI representatives have signed on to joint initiatives, as Eugene Bird did to the 2004 letter by 60 former U.S. diplomats who distributed a letter critical of then-United States President George W. Bush's "endorsement of Israeli Prime Minister Ariel Sharon's unilateral plan to reject the rights of three million Palestinians, to deny the right of refugees to return to their homeland, and to retain five large illegal settlement blocs in the occupied West Bank,” reversing “long-standing American policy in the Middle East."[22] In February 2005 CNI joined other concerned organizations in a meeting with Department of State officials regarding Israeli mistreatment of Palestinian American prisoners and called for the release of some of the prisoners.[23] In May 2005 CNI joined with more than a dozen groups to protest the annual AIPAC convention.[24] In July 2006 CNI co-sponsored a protest of over 400 people at the Israeli Embassy during the 2006 Lebanon War between Israel and Hezbollah.[25] In 2007 CNI joined 33 other groups calling for the U.S. government to obtain detailed site information on Israel's cluster bomb strikes in Lebanon during its 2006 attacks on that nation.[26]

CNI has commissioned several polls. A 2003 a Zogby International poll showed that while 56 percent of Americans strongly support or somewhat support a Palestinian state, 30 percent somewhat or strongly oppose a Palestinian state. Fourteen percent were not sure.[27] A mid-2004 Zogby poll found that half of all likely American voters agreed that Democratic Party presidential candidate John Kerry "should adopt an entirely new policy, different from the present administration, toward Israel."[28] A 2006 Zogby poll on the Iraq war found that a nearly equal number of likely American voters (40 to 39 percent) agreed or disagreed with the proposition that "the work of the Israel lobby on Congress and the Bush administration has been a key factor for going to war in Iraq and now confronting Iran."[29]

CNI conducts public hearings on Capitol Hill. Noteworthy events included a June 2004 event CNI co-sponsored with the Council on American-Islamic Relations a presentation on “The Muslim Vote in 2004" where independent presidential candidate Ralph Nader complained that “Muslim Americans are only the latest religious and ethnic group to feel the brunt of political hysteria and abuse” and commented about Israeli leaders "The days when the chief Israeli puppeteer comes to the United States and meets with the puppet in the White House and then proceeds to Capitol Hill, where he meets with hundreds of other puppets, should be replaced." This led to a heated debate with the Anti-Defamation League.[30][31][32][33][34] Others include a 2006 hearing on "The Politics of Starvation: The Humanitarian Crisis in Palestine"[35] and a 2008 hearing on the dangers of U.S.’ uncritical support for Israel featuring professor John Mearsheimer.[36][37]

Since 2002 CNI has taken out occasional full-page ads in publications like the New York Times, Denver Post and Christian Science Monitor promoting its position.[38] In 2004 AIPAC charged that a CNI ad in the Washington Times that criticized Israel for conducting espionage and covert operations against the United States, erecting an "apartheid wall" and building illegal settlements was an attempt to convince policymakers that AIPAC "is doing something wrong."[39] In a 2006 New York Times advertisement CNI wrote "there is strong evidence that irrational concern for Israel by U.S. policymakers continues to be a prime motivation for our military adventures."[40]

In Spring 2006 CNI members conducted a fact-finding tour of the Middle East region, meeting with heads of state and acting as international observers in the Palestinian election process. Three were former U.S. diplomats who met in Lebanon with Hassan Nasrallah leader of Hezbollah. One was Edward Peck, a former U.S. Chief of Mission in Iraq and deputy director of the White House Task Force on Terrorism in the Reagan Administration.[41]

In preparation for the Annapolis Conference six CNI representatives 2007 trip, including Ambassador Keeley, met in face-to-face talks with prime ministers, foreign ministers and non-government officials of Israel, Palestinian Authority, Jordan, Syria and Lebanon.[42][43] The 2008 trip included both “citizen diplomats” and retired diplomats who met with, among others, representatives of Hamas.[44][45]

On March 28, 2000, Pete McCloskey, the chairman of CNI at the time, gave the keynote address on the subject of the Anti-Defamation League and free speech at a conference organized by the Holocaust denial organization Institute for Historical Review.[46][47] When McCloskey ran in the 2006 Republican Party primary for congress, there was a public controversy over exactly what he said about The Holocaust at the event.[48][49][50] McCloskey was endorsed by the San Francisco Chronicle[51] and the Los Angeles Times[52] despite the controversy, but lost the nomination by a 2-1 margin.[53]

According to a 2001 article in Salon.com Abdurahman Alamoudi, a member of the CNIF Board of Directors, said at a November 2000 rally against Israel in Lafayette Park, across from the White House: "'Hear that, Bill Clinton! We are all supporters of Hamas. I wish they add that I am also a supporter of Hizballah."[54] In 2004, Alamoudi pled guilty to financial and conspiracy charges and was subsequently sentenced to 23 years in prison.[55] Eugene Bird explained that at the time he joined CNI Alamoudi was a highly regarded Muslim spokesperson who worked with the United States Department of State. As soon as Alamoudi was convicted, CNI asked him to leave its board.[56]

On May 4, 2004 Eugene Bird appeared on Canadian Broadcasting Corporation's ("CBC") National News and commented ""We know that the Israeli intelligence was operating in Baghdad after the war was over...The question should be: Were there any foreign interrogators among those that were recommending very, very bad treatment for the prisoners?"[57] CBC issued a clarification that there was "no evidence for Bird's claims."[58] Two month's later former Brigadier General Janis Karpinski, who had been in charge of the Abu Graib prison, claimed that met an Israeli who worked as an interrogator at a secret intelligence centre in Baghdad.[59] She also stated that no Israelis worked at Abu Graib itself. Israel subsequently denied her claims, stating that there was "no basis whatsoever to the reports."[60]