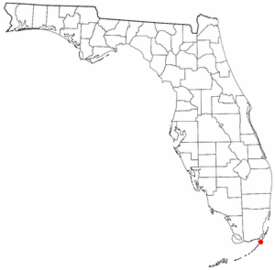 Location of Key Largo, Florida (red dot near bottom of the map) 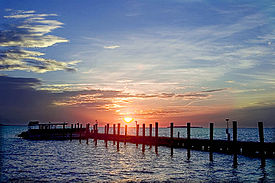 Key Largo is connected to the mainland in Miami-Dade County by two routes. The Overseas Highway, which is U.S. Highway 1, enters Key Largo at Jewfish Creek near the middle of the island and turns southwest. Card Sound Road connects to the northern part of Key Largo at Card Sound Bridge and runs southeastward to connect with County Road 905, which runs southwest and joins U.S. 1 at about mile marker 106. These routes originate at Florida City on the mainland.

Key Largo is a popular tourist destination and calls itself the "Diving Capital of the World" because the living coral reef a few miles offshore attracts thousands of scuba divers and sport-fishing enthusiasts.[2]

The island gained fame as the setting for the 1948 film Key Largo, although it was filmed entirely on a Warner Brothers sound stage in Hollywood[3] except for background location filming used for establishing shots.[4][5] The island's post office in Rock Harbor, which had been named after a nearby cove, changed its name to Key Largo after the film's success and pressure from local businessmen. It did this so that everyone living north of Tavernier would have a Key Largo address and the cancellation would say Key Largo instead of Rock Harbor.[6]

Key Largo is situated between Everglades National Park to the north-west and John Pennekamp Coral Reef State Park to the east, the first underwater park in the United States and the site of the only living coral barrier reef in the continental United States.

The island of Key Largo is an exposed, fossilized remnant of a coral reef that was formed during a period of higher sea level and then uncovered and eroded during a subsequent ice age. The highest elevation is a slight ridge forming the spine of the island, which rises to as high as about 15 feet. The land slopes from the spine down to sea level on the oceanside and bayside.

The island's substrate is called Key Largo Limestone; in many places, fossilized corals and smooth, eroded limestone "caprock" are visible at the surface. Solution holes, which are pockets dissolved in the limestone by acidic rainwater, form shallow depressions in the land. The natural shoreline of the island is generally rocky. A slippery, gray, limestone-based clay called "marl" is the shoreline and near-shore soil. There are no natural sand beaches on the island. Inland, decomposed vegetation forms a rich, acidic humus soil up to about six inches thick, topped by "leaf litter." The soil supports a diverse flora of herbaceous plants and woody shrubs and hardwood trees.

Key Largo's climate is considered tropical. Frost has never been recorded in the island.