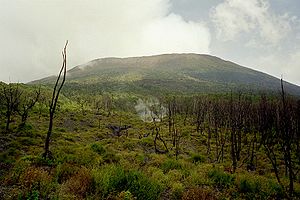 The Virunga Mountains are a chain of volcanoes in East Africa, along the northern border of Rwanda, the Democratic Republic of the Congo (DRC) and Uganda. The mountain range is a branch of the Albertine Rift, a part of the Great Rift Valley. They are located between Lake Edward and Lake Kivu. The name "Virunga" is an English version of the Kinyarwanda word ibirunga, which means "mountains".

The Virunga Mountains are home of the critically endangered mountain gorilla, listed on the IUCN Red List of Endangered Species due to habitat loss, poaching, disease, and war (Butynski et al. 2003). The Karisoke Research Center, founded by Dian Fossey to observe gorillas in their native habitat, is located between Mount Karisimbi and Mount Bisoke.