Poaching is the illegal taking of wild plants or animals contrary to local and international conservation and wildlife management laws. Violations of hunting laws and regulations are normally punishable by law and, collectively, such violations are known as poaching.

It may be illegal and in violation because

Note that only wild animals can be poached. Stealing or killing domestic animals is considered to be theft ("cattle rustling"), not poaching.

Plant poaching is also on the rise. A prominent example is the removal of ginseng growing in the Great Smoky Mountains National Park.[1] It is estimated that wild ginseng plants are worth more than $260–365 per pound (dried) on the black market.[2] 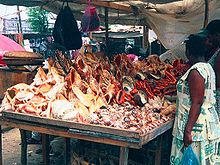 A seashell vendor in Tanzania sells to tourists seashells which have been taken from the sea alive, killing the animal inside.

The American paddlefish is poached for its eggs

Traditional Chinese medicine often incorporates ingredients from all parts of plants, the leaf, stem, flower, root, and also ingredients from animals and minerals. The use of parts of endangered species (such as seahorses, rhinoceros horns, binturong and tiger bones and claws) has created controversy and resulted in a black market of poachers who hunt restricted animals.[3][4] Deep-seated cultural beliefs in the potency of tiger parts are so prevalent across Asia that laws protecting even critically endangered species such as the Sumatran tiger fail to stop the display and sale of these items in open markets, according to a 2008 report from TRAFFIC.[5] Popular "medicinal" tiger parts from poached animals include tiger penis, culturally believed to improve virility, and tiger eyes.

There have been many national and international actions taken against certain kinds of poaching and hunting. Hunting for ivory was banned in 1989, but poaching of elephants continues in many parts of Africa stricken by economic decline. The Philippines has more than 400 endangered animals, all of which are illegal to poach.

Some species, such as the sturgeon or paddlefish (aka spoonbill catfish) are listed as species of "special concern" by the U.S. Federal government, but are only banned from fishing in a few states such as Mississippi and Texas.[6] The species, which is being overfished for its eggs to make caviar, is still allowed to be taken in all other states.

Some game wardens have made use of robotic decoy animals placed in high visibility areas to draw out poachers for arrest after the "animals" get shot.[7]