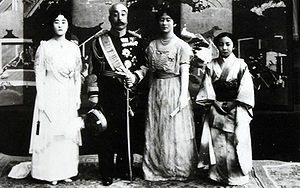 Prince Nashimoto Morimasa (梨本宮守正王, Nashimoto no miya Morimasa ō?, March 9, 1874 – January 2, 1951) was a member of the Japanese imperial family, field marshal in the Imperial Japanese Army. An uncle-in-law of Emperor Shōwa, an uncle of his consort, Empress Kōjun, and the father-in-law of Crown Prince Euimin of Korea, Prince Nashimoto was the only member of the imperial family arrested for war crimes during the American occupation of Japan following the Second World War.

Prince Nashimoto Morimasa was born in Kyoto, the fourth son of Prince Kuni Asahiko and Harada Mitsue, a court lady. His father, a prince of the blood and one-time Buddhist priest, was the head of one of the ōke collateral branches of the imperial family created during the early Meiji period. Originally named Prince Tada, his half-brothers included Prince Kaya Kuninori, Prince Higashikuni Naruhiko, Prince Asaka Yasuhiko, Prince Kuni Taka, and Prince Kuni Kuniyoshi.

On December 2, 1885, Emperor Meiji named him successor to the Nashimoto-no-miya, another cadet branch of the imperial family. He adopted the personal name "Morimasa" the following year.

On November 28, 1900, Prince Nashimoto married Nabeshima Itsuko (February 2, 1882 - August 18, 1976), the second daughter of Marquis Nabeshima Naohiro, a former Japanese ambassador to Italy and the son of the last feudal lord (daimyō) of Saga Domain. Itsuko was the maternal aunt of the late Princess Chichibu. The couple had two daughters.

Like the other princes of the imperial blood at the time, Prince Nashimoto Morimasa pursued a military career. Educated at the Central Military Preparatory School and the Imperial Japanese Army Academy, he received a commission as a second lieutenant in the IJA 39th Infantry Regiment in 1899. In 1903, he went to the École Spéciale Militaire de Saint-Cyr at St. Cyr, France, but returned to Japan the following year and served with his regiment as a captain under General Yasukata Oku in the Russo-Japanese War. Prince Nashimoto then returned to France in August 1906 and remained until July 1909. The Prince rose to the rank of major of the Infantry in 1906, lieutenant colonel in 1908, and colonel in 1910. He was promoted to lieutenant general and commander of the IJA 16th Division in August 1917.

Prince Nashimoto became a member of the Imperial Japanese Army General Staff in November 1919 and was promoted to the rank of general in August 1922. On August 8, 1932, he was given the largely honorary rank of field marshal and became a member of the Board of Marshals and Fleet Admirals. However, the prince held no major military commands during the Pacific War (1931–1945). Unlike Prince Asaka and Prince Higashikuni, he remained largely removed from the mounting radicalism within the army, which culminated in the February 26 Incident of 1936. In October 1937, he became chief priest (saishu) of the Ise Shrine, upon the death of his half-brother, Prince Kuni Taka.

On December 2, 1945, General Douglas MacArthur, the military governor of Japan during the American occupation, ordered the arrest of Prince Nashimoto as a "class A" war criminal, largely for his role in supporting State Shintoism. (Prince Nashimoto was the chief priest of the Grand Shrine of Ise from 1937 until 1947). Prince Nashimoto was also the second most senior member of the Imperial Family (after Prince Kan'in) during World War II.

The prince's arrest caused great consternation among the Japanese, because it opened the possibility that Emperor Shōwa and more senior members of the imperial household might face also prosecution for war crimes. Few people on either side regarded Prince Nashimoto was more than a symbol, but he was regarded more as a hostage to ensure Emperor Shōwa's compliance with American-directed political reforms. After four month's imprisonment in Tokyo's Sugamo Prison, American authorities released him without charges on April 13, 1946. By action of the reconstituted Imperial Household Council, Prince and Princess Nashimoto were divested of their imperial status and became commoners on October 14, 1947.

However, unlike other former members of the Japanese imperial family, the American Occupation authorities (SCAP) purged former Prince Nashimoto allegedly because of his military career, denying him any compensation for the loss of his title and properties. American bombing raids had already destroyed his Tokyo residence, and he was forced to sell his country villa to pay taxes. He spent his last years in poverty and obscurity, unlike many other former nobles with more extensive (and questionable) war records.