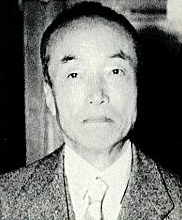 nihongo|Prince Higashikuni Naruhiko|東久邇宮 稔彦王|Higashikuni no miya Naruhiko ō |extra= - was the 30th from to for a period of 54 days. An uncle of Emperor Shōwa twice over, Prince Higashikuni was the only member of the Japanese imperial family to head a cabinet. He also had the shortest tenure of any Japanese prime minister.

Prince Naruhiko was born in , the ninth son of ("Kuni no miya Asahiko Shinnō") and the court lady Terao Utako. His father, Prince Asahiko (also known as "Shōren no miya Sun'yu" and "Nagakawa no miya Asahiko)", was a son of ("Fushimi no miya Kuniie Shinnō"), the twentieth head of the , the oldest of the "sesshu shinnōke" or cadet branches of the imperial dynasty from whom an emperor might be chosen in default of a direct heir. Prince Naruhiko was a half-brother of , the father of the future , the wife of Emperor Showa. His other half-brothers, Prince Asaka Yasuhiko, Prince Nashimoto Morimasa, and , all formed new branches of the imperial family (ōke) during the .

granted Prince Naruhiko the title "Higashikuni no miya" and permission to start a new branch of the imperial family on . Prince Higashikuni Naruhiko married the ninth daughter of Emperor Meiji, Princess Toshiko ( - ), on . The couple had four sons.

Prince Higashikuni then studied , at the in , from 1920 to 1926. Always somewhat of a rebel, Prince Higashikuni's behavior in Paris scandalized the Imperial Court. He left his wife and children in Japan, and the death of his second son did not prompt his return. He had a French mistress, enjoyed fast cars and high living. In 1926, the Imperial Household Ministry dispatched a chamberlain to Paris to collect him.

Upon his return to Japan, he was assigned to the Headquarters and eventually rose to the rank of , having successively served as commander of the 5th Infantry Brigade (1930-1934), the (1934-1937), the (1937-1938), and the IJA 2nd Army in (1938-1939). While he was commander of the Army Air service, he ordered massive bombing of Chineses cities such as and Chongqing. In 1937, the bombings of and led to a resolution of protest by the Far Eastern Advisory Committee of the .

Promoted to full , Prince Higashikuni served from 1939 as a member of the Supreme War Council. He served as commander of the Home Defense Command from 1941 to 1944. The prince was awarded the , 1st Class in 1940.

Before the start of the , in October 1941, outgoing Prime Minister proposed Prince Higashikuni to as his successor for prime minister. Konoe believed that only a member of the Imperial Family with a distinguished military background could restrain the pro-war faction (, , and ). Prince Higashikuni was also the choice of the Chief of staff of the Army and the Navy. However, both and the Lord Privy Seal, , believed that it would be inappropriate for a member of the Imperial Family to serve as he could be blamed for the war. The emperor thus chose instead .

Prince Higashikuni was part of the conspiracy (with , , and former Prime Minister Konoe) which ousted Tojo in July 1944 following the fall of Saipan to American forces.

After the course of the war turned against Japan, appointed Prince Higashikuni to the position of on , replacing Admiral . The mission of the Higashikuni cabinet was twofold: first, to ensure the orderly cessation of hostilities and of the Japanese armed forces; and second, to reassure the Japanese people that the imperial institution remained secure. Prince Higashikuni resigned in October over a dispute with the American occupation forces over the repeal of the 1925 .

On 27 February and 4 March 1946, Prince Higashikuni gave interviews to the "" and "" in which he claimed that many members of the imperial family had approved Emperor Hirohito’s abdication, with serving as regent until Crown Prince came of age. In the government, only Prime Minister and the imperial household minister opposed this.

In 1946, Prince Higashikuni asked the emperor for permission to renounce his membership in the Imperial Family and become a commoner. denied the request. However, along with other members of the imperial branch families ("shinnōke" and "ōke"), Prince Higashikuni lost his title and most of his wealth as a result of the American occupation’s abolition of the princely houses on .

As a private citizen, Higashikuni operated several unsuccessful retail enterprises (including a provisions store, second-hand goods store, and dressmaker's shop). He even created his own new -based religious sect, the "Higashikuni-kyo", which was subsequently banned by the American occupation authorities.

The former prince became the honorary chairman of the (IMAF) in 1957, and honorary president of several other organizations.

In 1958, Higashikuni published his wartime journals under the title, "Ichi Kozuko no senso Nikki" (or The War Diary of a Member of the Imperial Family). He published his memoirs, "Higashikuni Nikki", in 1968.

Former Prince Higashikuni Naruhiko died of in Tokyo on at the age of 102, having outlived his wife, two of his sons, his siblings, and his nephew, the Shōwa Emperor. Higashikuni is today mainly remembered as Japan's first postwar prime minister. He was one of the longest lived prime ministers of all time, along with , and .