Carcano is the frequently used name for a series of Italian bolt-action military rifles and carbines. Introduced in 1891, this rifle was chambered for the rimless 6.5x52mm Mannlicher-Carcano Cartuccia Modello 1895 cartridge. It was developed by the chief technician Salvatore Carcano at the Turin Army Arsenal in 1890 and called the Model 91 (M91). Successively replacing the previous Vetterli-Vitali rifles and carbines in 10.35x47mmR, it was produced from 1892 to 1945. The M91 was used in both rifle and carbine form by most Italian troops during the First World War and by Italian and some German forces during Second World War. The rifle was also used during the Winter War by Finland, and again by regular and irregular forces in Syria, Libya, Tunisia, and Algeria during various postwar conflicts in those countries.

The Type I Carcano rifle was produced by Italy for the Japanese Empire prior to World War II. After the invasion of China, all Arisaka production was required for use of the Imperial Army, so the Imperial Navy contracted with Italy for this weapon in 1937. The Type I is based on the Type 38 rifle and utilizes a Carcano action, but retains the Arisaka/Mauser type 5-round box magazine. The Type I was utilized primarily by Japanese Imperial Naval Forces and was chambered for the Japanese 6.5x50mm Arisaka cartridge. Approximately 60,000 Type I rifles were produced by Italian arsenals for Japan.

Although this rifle is often called "Mannlicher-Carcano", especially in American parlance, neither that designation nor the name "Mauser-Parravicino" is correct. Its official designation in Italian is simply Modello 1891, or M91 ("il novantuno"). The rifle depends for proper usage upon a magazine system using en bloc charger clips which were originally developed and patented by Ferdinand Mannlicher, but the actual shape and design of the Carcano clip is derived from the German Model 1888 Commission Rifle.

Until 1938, all M91 rifles and carbines were chambered for the rimless 6.5x52mm Modello 1895 cartridge, using a round-nose metal case bullet of 160 grains weight at approximately 2,000-2,400 ft/s muzzle velocity, depending upon barrel length. At least one small arms authority noted inconsistencies in powder types in arsenal-loaded 6.5x52mm military ammunition, often with different powder types and ammunition lots intermixed within a single clip of ammunition.[2] The practice of intermixing powder types and ammunition lots in clipped rifle ammunition was generally avoided by arsenals of other nations, as it generally resulted in varying bullet velocities and excessive bullet dispersion on the target.

After reports of inadequate performance at both short and long ranges[3][4] during the campaigns in Italian North Africa (1924-1934), and the Second Italo-Abyssinian War (1934), the Italian army introduced a new short rifle in 1938, the Modello 1938, together with a new cartridge in 7.35x51mm caliber. In addition to the slightly larger caliber, Italian ordnance designers introduced a spitzer-type bullet for the new cartridge, with the tip filled with aluminum to produce an unstable (tumbling) projectile upon impact in soft tissue (a design most likely copied from the .303 British Mk VII bullet).

However, the Italian government was unable to successfully mass produce the new arms in adequate quantities before the onset of war, and in 1940, all rifle and ammunition production reverted to 6.5 mm, but no 7.35 mm Mod. 38 rifles nor carbines were ever re-barreled to the old 6.5x52mm caliber. Some Italian troops serving on the Russian front were armed with 7.35 mm Mod. 1938 rifles, but exchanged them in 1942 for 6.5 x 52 mm arms.[1] 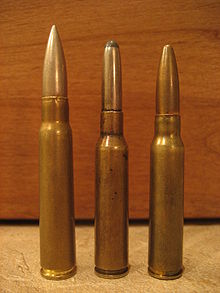 Approximately 94,500 7.35 mm Modello 1938 rifles were shipped to Finland, where they were known as Terni carbines.[5] They were primarily used by security and line-of-communications troops during the Winter War of 1939–1940, though some frontline troops were issued the weapon.[5] According to reports, the Finns disliked the rifle.[5] With its non-standard 7.35 mm caliber, it was problematic to keep frontline troops supplied with ammunition, and its non-adjustable rear sight (fixed for 300 m) made it ill-suited for use in precision shooting at the varied ranges encountered by Finnish soldiers during the conflict.[5] Soldiers also complained that the ammunition demonstrated excessive bullet dispersion on the target.[5] Whenever possible, Finnish soldiers discarded the weapon in favor of rifles acquired on the battlefield,[5] including standard models of captured Soviet-made Mosin-Nagant rifles. The latter at least had the advantage of using commonly available 7.62x54mmR ammunition. By the outbreak of the Continuation War, Finnish Army headquarters had got the message. The remaining Mod. 1938 7.35 mm rifles were issued to the Finnish Navy, as well as anti-aircraft, coastal defense, and other second-line (home front) troops.[5]

In 1941, the Italian military returned to a long-barrelled infantry rifle once again (slightly shorter than the original M91), the Carcano M91/41. True sniper versions never existed, but in World War I a few rifles were fitted with telescopes and issued for service use (World War II scoped rifles were strictly prototypes).

Since the 1980s, several lots of Moschetti M91/38 TS (special troops' carbines) chambered for the German 7.92x57mm Mauser sS heavy ball round, have appeared on the surplus markets. Two small batches of Moschetti M91/38 TS carbines shows barrels marked 1938 and 1941, but they were not used at these times with any Italian forces, and their peculiar serial numbering suggests that these might just be rebored unused surplus barrels that were converted with other ones after 1945. Many 7.92 mm Carcano carbines were apparently exported to Egypt after World War II, where they served as drill and training carbines. Several also bear Israeli armed forces markings. The occasionally used model moniker "Model 1943 (M43)" for these converted 7.92mm rifles is wrong, as they were never so designated by the Italian military.

German forces captured large quantities of Carcanos after Italy's capitulation in September 1943. It was the most commonly issued rifle to the German Volkssturm ("People's Militia") units in late 1944 and 1945.[6]

After World War II, Italy replaced its Carcano rifles first with British Lee-Enfields and then with the US .30 caliber (7.62 mm) M1 Garand semi-automatic rifle which the Italians labeled the 'Model 1952 (M52). Finland sold all of its approximately 74,000 remaining 7.35 mm M91/38 Carcano rifles on the surplus market. As a consequence, large quantities of surplus Carcanos were sold in the USA and Canada beginning in the 1950s. In Italy, the Polizia di Stato retained the rifle, retiring it from service in 1981. Captured 6.5mm Carcano rifles were used by Greek forces post-war, with ammunition supplied by U.S. Western Cartridge Co.

The original Carcano Modello 1895 cartridge (6.5x52mm), was also used in World War I era machine guns in the Modello 30 light machine gun; the latter was employed in Abyssinia and in World War II by Italian troops until the Armistice. In 1935 the 8x59mm Breda cartridge was adopted for some Italian heavy machine guns (rechambered Fiat-Revelli, Breda M37, Breda M38); its longer range and heavier projectile proved much more effective in combat, particularly against motorized troops.

During the 2011 Libyan Civil War, many rebels went into battle with their personally-owned weapons, including old bolt-action rifles and shotguns. Of these, Carcano-style rifles and carbines have been the most frequently observed style of bolt-action rifle. They are predominantly used by rebels in the Nafusa mountains. These old weapons are seeing combat once again due to the rebels limited access to modern firearms. Additionally, some Libyan rebels prefer to use their familiar hunting weapons over the more modern, yet unfamiliar, assault rifles available.[7][8][9] According to Al-Fitouri Muftah, a member of the rebel military council overseeing the western mountain front, as many as 1 in 10 rebels in the region are armed with WWII-era weapons. [10] The vast majority of these weapons are likely Carcanos.