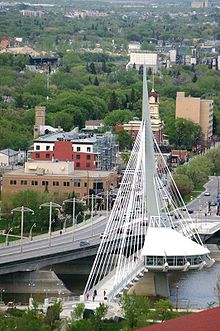 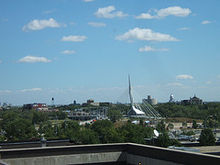 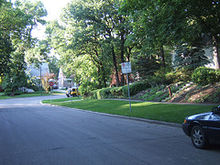 The suburb of Saint Boniface.

Saint Boniface is a city ward of Winnipeg, home to the Franco-Manitoban community. It features such landmarks as the Cathédrale de Saint Boniface (St. Boniface Cathedral), Boulevard Provencher, the Provencher Bridge, Esplanade Riel, St. Boniface Hospital, the Collège universitaire de Saint-Boniface and the Royal Canadian Mint. It covers the southeast part of the city and includes le Vieux Saint-Boniface (Old St. Boniface), Norwood, Windsor Park, Southdale, Southland Park, Royalwood, Sage Creek and Island Lakes, plus a large industrial area. The ward is represented by a member of Winnipeg City Council, and also corresponds to the neighbourhood clusters of St. Boniface East and West. The population is 65,000 (Statistics Canada Census 2006). 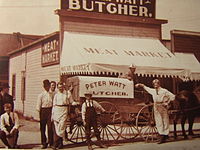 Fur traders and European mercenaries hired by Lord Selkirk to protect his fledgling Red River Colony were among the area's first settlers. With the founding of a Roman Catholic mission in 1818, St Boniface began its role in Canadian religious, political and cultural history - as mother parish for many French settlements in Western Canada; as the birthplace of Louis Riel and fellow Métis who struggled to obtain favourable terms for Manitoba's entry into Confederation; and as a focus of resistance to controversial 1890 legislation to alter Manitoba's school system and abolish French as an official language in the province (see Manitoba Schools Question).

Early educational, cultural and social-service institutions were started by religious orders, including the Sisters of Charity of Montréal (Grey Nuns) who arrived in 1844. The Collège de Saint-Boniface (dating back to 1818), a founding college of University of Manitoba, and St Boniface General Hospital grew from these institutions.

The early economy was oriented to agriculture. Union Stockyards, developed 1912-13, became the largest livestock exchange in Canada and focal point for a meat-packing and -processing industry. By the early 1900s, numerous light and heavy industries were established. St Boniface was incorporated as a town in 1883 and as a city in 1908. In 1971, St. Boniface was amalgamated, along with several neighboring communities, into the City of Winnipeg.[1] As one of the larger French communities outside Québec, it has often been a centre of struggles to preserve French language and identity within Manitoba.

Saint Boniface is the birthplace of:

St. Boniface is represented by the St. Boniface Riels hockey team which plays in the Manitoba Major Junior Hockey League.