The P-500 Bazalt (Russian: П-500 «Базальт»; English: basalt) is a liquid-fueled, rocket-powered, supersonic cruise missile used by the Soviet and Russian navies. Developed by OKB-52 MAP (later NPO Mashinostroyeniye), its GRAU designation is 4K80[1]. Its NATO reporting name is SS-N-12 Sandbox. It entered service in 1973 to replace the SS-N-3 Shaddock. The P-500 Bazalt has a 550 km range and a payload of 1,000 kg, which allows it to carry a 350 kt nuclear or a 950 kg semi-armor-piercing high explosive warhead (currently only the conventional version remains in service). The P-500 Bazalt uses active radar homing for terminal guidance, and can receive mid-course correction from the Tupolev Tu-95D, the Kamov Ka-25B and the Kamov Ka-27B.

The P-500 Bazalt was first deployed in 1975 on the Soviet aircraft carrier Kiev, and was later added to both the Echo II class submarine and the Juliett class submarine. The missiles was intended to be used in salvos; a submarine could launch eight in rapid succession, maintaining control of each through a separate datalink. In flight the group could co-ordinate their actions; one would fly up to 7,000 meters (23,000 feet) and use its active radar to search for targets, forwarding this data to the other missiles which remained at low altitude. The missiles were programmed so that half of a salvo would head for a carrier target, with the rest dividing between other ships. If the high flying missile was shot down another from the salvo would automatically pop up to take its place. All of the missiles would switch to active radar for the terminal phase of the attack.[2]

A version of the P-500 Bazalt with improved guidance and engines is used on the Slava class cruiser.

The P-700 Granit (NATO reporting name SS-N-19 Shipwreck) was partially based on the SS-N-12, but with a turbojet engine and a significantly modified airframe. The avionics, however, are very close. The P-800 Oniks and BrahMos are enlarged derivatives using ramjet propulsion.[citation needed] 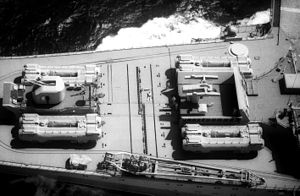