The Secret Garden is a novel by Frances Hodgson Burnett. It was initially published in serial format starting in the autumn of 1910, and was first published in its entirety in 1911. It is now one of Burnett's most popular novels, and is considered to be a classic of English children's literature.

Mary Lennox, a ten-year-old girl, is born in India to rich British parents. She is unwanted by her mother and taken care of primarily by servants, who pacify her as much as possible to keep her out of the way. Spoiled with a temper, she is unaffectionate, angry, rude and obstinate. A cholera breakout in the manor kills her parents and many servants. She is discovered alone but alive after the house is abandoned. She is sent to England to live with her uncle, Archibald Craven.

At first, Mary is her usual self, sour, disliking the large house, the people within it, and most of all the vast stretch of moor, which seems scrubby and gray after the winter. She is told that she must stay to her two rooms and that nobody will bother much with her and she must amuse herself. Martha Sowerby, her good-natured maidservant, tells Mary a story of the late Mrs. Craven, and how she would spend hours in a private garden growing roses; an untimely accident kills her, and Mr. Craven has the garden locked and the key buried. Mary is roused by this story and starts to soften her ill manner despite herself. Soon she begins to lose her disposition and gradually comes to enjoy the company of Martha, Ben Weatherstaff the gardener, and also that of a friendly robin redbreast to whom she attaches human qualities. Her appetite increases and she finds herself getting stronger as she plays by herself on the moor. Martha's mother buys Mary a skipping rope in order to expedite this, and she takes to it immediately. Mary's time is occupied by wondering about the secret garden and a strange crying that can sometimes be heard around the house which the servants ignore or deny.

While exploring the gardens, Mary comes across a badger hole and finds a key belonging to a garden nobody has tended to for over ten years. She chances to ask the housekeeper (Martha) for garden tools, which Martha has delivered by Dickon, her twelve-year-old brother. Mary and Dickon take a liking to each other, as Dickon has a soft way with animals and a good nature. Eager to absorb his gardening knowledge, she reluctantly lets him into the secret of the garden, which he agrees to keep.

That night, Mary hears the crying again. She follows the noise and to her surprise finds a small boy her age, living in a hidden bedroom. They discover they are cousins: he is the son of her uncle; his mother died in childbirth, and he suffers from an unspecified problem with his spine. Mary visits every day that week, distracting him from his troubles with stories of the moor, of Dickon and his animals and of the garden. It is decided he needs fresh air and the secret garden, which Mary finally admits she has access to. Colin is put into his wheelchair and brought outside into the garden, the first time he's been outdoors in years.

While in the garden, the children are surprised to see Ben Weatherstaff looking over the wall on a ladder. Startled and angry to find the children there in his late mistress' (Colin's mother's) garden he admits he believed Colin to be a cripple. Colin stands out of his chair to prove him wrong and finds that his legs are fine, though weak from misuse.

Colin spends every day in the garden, becoming stronger. The children conspire to keep Colin's health a secret so he can surprise his father, who traveling and mourning over his late wife. As Colin's health improves, his father's mood does as well, and he has a dream of his wife calling him into the garden that makes him immediately pack his bags and head home. He walks the outer wall in memory but hears voices inside, finds the door unlocked and is shocked to not only see the garden in full bloom with children in it, but his son running. The servants watch as Mr. Craven walks back to the manor, and all are stunned that Colin runs beside him.

The garden is the book's central symbol, inspired by Burnett's interest in Mary Baker Eddy's Christian Science theories.[1] The secret garden at Misselthwaite Manor is the site of both the near-destruction and the subsequent regeneration of a family.[2] Using the garden motif, Burnett explores the healing power inherent in living things.

Maytham Hall in Kent, England, where Burnett lived for a number of years during her marriage is often cited as the inspiration for the book's setting.[3] Burnett kept an extensive garden, including an impressive rose garden. However, it has been noted that besides the garden, Maytham Hall and Misselthwaite Manor are physically very different.[3]

The Secret Garden was first serialized, starting in autumn 1910, in The American Magazine, a publication aimed at adults. The entire book was first published in the summer 1911 by Frederick A. Stokes in New York, and by Heinemann in London. Its copyright expired in the United States in 1987, and in most other parts of the world in 1995, placing the book in the public domain. As a result several abridged and unabridged editions were published during the late 1980s and early 1990s.

The book's working title was Mistress Mary, in reference to the English nursery rhyme Mary, Mary, Quite Contrary.

Marketing to both adult and juvenile audiences may have had an effect on its early reception; the book was not as celebrated as Burnett's previous works during her lifetime.[4]

The Secret Garden paled in comparison to the popularity of Burnett's other works for a long period. Tracing the book's revival from almost complete eclipse at the time of Burnett's death in 1924, Anne H. Lundin noted[5] that the author's obituary notices all remarked on Little Lord Fauntleroy and passed over The Secret Garden in silence.

With the rise of scholarly work in children's literature over the past quarter-century, The Secret Garden has steadily risen to prominence, and is now one of Burnett's best-known works. The book is often noted as one of the best children's books of the twentieth century.[4] Barbara Sleigh's Jessamy (1967) is reading the book on the train as the novel begins.

The first filmed version was made in 1919 by the Famous Players-Lasky Corporation with 17 year old Lila Lee as Mary and Paul Willis as Dickon, but the film is thought lost.

In 1949, MGM filmed the second adaptation with Margaret O'Brien. This version was mostly in black-and-white, but the sequences set in the restored garden were filmed in Technicolor.

In 1987, Hallmark Hall of Fame filmed a TV adaptation of the novel starring Gennie James as Mary, Barret Oliver as Dickon, and Jadrien Steele as Colin. Billie Whitelaw as Mrs Medlock Derek Jacobi played the role of Archibald Craven, with Alison Doody appearing in flashbacks and visions as Lilias; Colin Firth made a brief appearance as the adult Colin Craven.

In Japan, NHK produced and broadcast an anime adaptation of the novel in 1991-1992 titled Anime Himitsu no Hanazono (アニメ ひみつの花園). Miina Tominaga was featured as the voice of Mary, while Mayumi Tanaka voiced Colin. The 39-episode TV series was directed by Tameo Kohanawa and written by Kaoru Umeno. Based on the title, this anime is sometimes mistakenly assumed to be related to the popular dorama series Himitsu no Hanazono. Surprisingly unavailable in the English language, it has been dubbed into several other languages including Spanish, Italian, Polish, and Tagalog.

Stage adaptations of the book have also been created. One notable adaptation is a musical with music by Lucy Simon and book and lyrics by Marsha Norman, which opened on Broadway in 1991. The production was nominated for seven Tony Awards, winning Best Book of a Musical and Best Featured Actress in a Musical (Daisy Eagan as Mary, at eleven years old is the youngest girl ever to win a Tony, Frankie Michaels is the youngest person to ever win a Tony at age ten for his performance in the Broadway musical Mame in 1966).[citation needed]

To coincide with the centenary of Frances Hodgson Burnett's novel, Dorset-based Angel Exit theatre company are touring a new production of The Secret Garden from January to April 2012. The Arts Council funded show, co-produced by Dorchester Arts, has its premiere at the town’s Corn Exchange in January 2012. 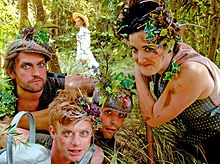