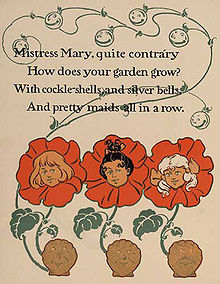 "Mary, Mary, Quite Contrary" is a popular English nursery rhyme. The rhyme has been seen as having religious and historical significance, but its origins and meaning are disputed. It has a Roud Folk Song Index number of 19626.

The most common modern version is:

Mary, Mary, quite contrary,
How does your garden grow?
With silver bells, and cockle shells,
And pretty maids all in a row.[1]

Mistress Mary, Quite contrary,
How does your garden grow?
With Silver Bells, And Cockle Shells,
And so my garden grows.[1]

Several printed versions of the eighteenth century have lyric:

Mistress Mary, Quite contrary,
How does your garden grow?
With Silver Bells, And Cockle Shells,
Sing cuckolds all in a row.[1]

The last line has the most variation including:

:Marigolds all in a row

Like many nursery rhymes, it has acquired various historical explanations. These include:

Still others argue that no proof has been found that the rhyme was known before the eighteenth century, while Mary I of England and Mary, Queen of Scots, were contemporaries in the sixteenth century.[1]

Use in popular culture

Mary, Mary, quite contrary
How does your garden grow?
"I live with my brat in a high-rise flat
so how in the world would I know."