The Narew River [ˈnarɛf] (Belarusian:Нараў, Lithuanian:Naura), in western Belarus and north-eastern Poland, is a left tributary of the Vistula river. The Narew is one of Europe's few braided rivers, the term relating to the twisted channels resembling braided hair.

The name of the river comes from a Proto-Indo-European root *nr primarily associated with water (compare Narva, Neretva, Neris, Ner and Nur).[1]

Until after World War II rivers were commonly classified by their length. As at the confluence near Zegrze Bug is longer than Narew, the Bugonarew was often considered part of Bug river and Narew was thought of as its tributary. However, at the same time Narew's discharge is much higher at their meeting point.

On December 27, 1962 the Prime Minister of Poland's act abolished the name Bugonarew soon after the Zegrze Reservoir had been constructed.[2] Since then the river is considered to be part of Narew, while Bug is currently considered a left tributary. The name however is continued to be used, especially by the inhabitants of towns located along the banks of the stretch of river, such as Pułtusk.

The Narew flows through the geographical region of Europe known as the Wysoczyzny Podlasko – Bialoruskie (English: Podlasie and Belarus Plateau) located within the Podlaskie Voivodeship and Masovian Voivodeship of Poland and the Hrodna Voblast of Belarus.

The Narew is the fifth longest Polish river. 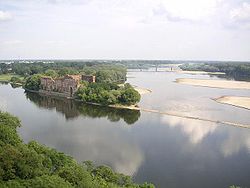 Confluence of the Narew and Vistula at Modlin 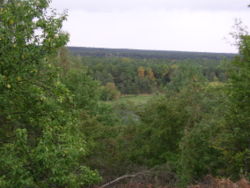 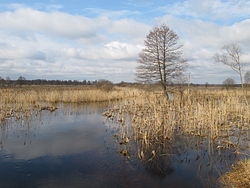 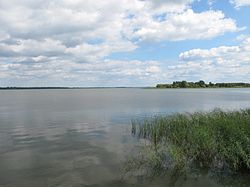 The Narew near Łomża. The river flows slowly, creating meanders

On August 23, 1939, the Soviet Union and Germany signed the Molotov-Ribbentrop Pact, agreeing to divide Poland along the Narew, Vistula (Wisła), and San rivers.

On September 6, 1939, Polish military forces attempted to use the Narew as a defense line against German attack during the German Invasion of Poland. This was abandoned the next day in favor of the Bug as German forces had already penetrated the defenses.

The Battle of Wizna was fought along the banks of the river between September 7 and September 10, 1939, between the forces of Poland and Germany during the initial stages of Invasion of Poland. Because it consisted of a small force holding a piece of fortified territory against a vastly larger invasion for three days at great cost before being annihilated with no known survivors, Wizna is sometimes referred to as a Polish Thermopylae in Polish culture.

On September 17, 1939, the Soviet Union invaded Poland. By 28 September, the Soviet Army had reached the line of the rivers Narew, Bug River, Vistula and San - completing the division of Poland as negotiated in advance.